The recent airport attack in Istanbul is the eleventh attack since mid-2015. At the same time, the Erdogan government has redoubled repression throughout the country and heightened the war against the Kurdish population. 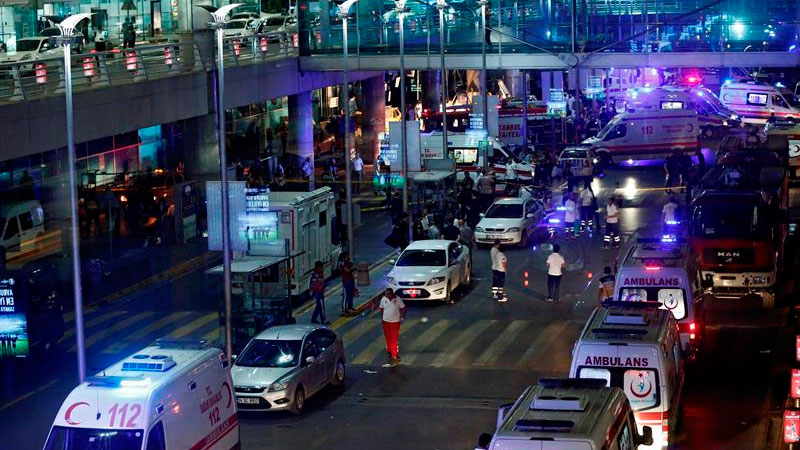 Suicide bombers with guns staged a deadly attack at Istanbul’s Ataturk International Airport on Tuesday, at around 10.30 p.m. local time. The governor stated that three perpetrators killed at least 28 people. The Associated Press reported the number was closer to 50 and that the attackers were linked to ISIS. Later, Prime Minister Binale Yildirim stated that there were 36 dead and 147 injured. One journalist wrote that there could have been as many as seven attackers in total.

This is the eleventh lethal attack in Turkey since June 2015, when the AKP (Justice and Development Party) government, after a drop in votes garnered during the general elections that month, escalated violence in the country and recommenced its war on the Kurdish population to regain its hegemony over the nationalist sectors of the population.

Immediately after Tuesday’s attacks, as in previous cases, the government issued a ban on media coverage of the event. For “national security” reasons, journalists are banned from writing “news stories, interviews, and criticisms.” The government is also throttling Twitter and Facebook.

Yet the government itself does not refrain from issuing its own propaganda. President Erdoğan’s chief advisor, Yigit Bulut, appeared on television to harshly criticize journalists, saying they should stop “exaggerating” the Istanbul attack. As always, the government spokespeople tried to bring a fatalistic interpretation to the event, claiming that the dead were “martyrs.” The president issued a statement saying that these attacks could have happened in any city across the world. He claimed that the attackers aimed to denigrate Turkey in the eyes of the world.

However, the domestic and international media have repeatedly documented that the AKP government played a key role in strengthening armed Islamist groups in Syria, which still operate with relative ease across Turkey.

Many social media users commented that the security forces are now content with protecting only the president and the government. The police seems to be incapable or uninterested in protecting the most central locations of Turkey’s biggest cities from such attacks despite warnings by foreign intelligence services. However, only a few days ago, 6000 police officers were mobilized to suppress the Istanbul Gay Pride with immense violence.

The military continues its devastation of entire neighborhoods in the Kurdish provinces, with weapons and bulldozers. As in previous cases, there will be no real investigation of those who were responsible for the attacks. Within just six hours after the massacre, flights at Ataturk Airport returned to their normal schedules.

The AKP government is continuing to fuel violence in Turkey. More and more, the political and social panorama of the country is resembling its southern neighbor, Syria.