Although Turkish army claims to be fighting ISIS to legitimize the invasion, its real objective is to stop the advance of Kurdish militia, the only progressive force on the ground. 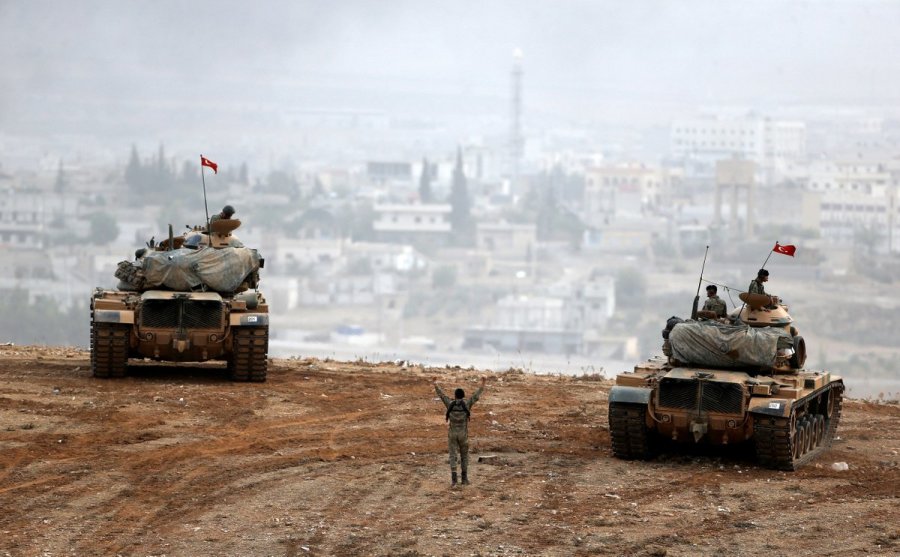 In a critical development in the Syrian civil war, the Turkish army and allies began a ground incursion towards the Syrian border city of Jarablus on the morning of August 24. Turkish artillery and jets, supported by US military advisers, warplanes and drones, started pounding ISIS targets at around 4 a.m. local time. This was followed by a land operation at 11 a.m. by Turkish special forces and tanks, as well as 1,500 Syrian radical Islamist fighters. These fighters, according to BBC Turkish, were brought a few days ago from Idlib by Turkish officers and grouped on the Turkish side of the border.

As of the writing of this piece, invading forces are advancing surprisingly rapidly, conquering village after village, and have already captured Jarablus as of at around 7 p.m. local time with only one casualty. Indeed, Kurdish sources argue that this is a mock fight, as ISIS is evacuating its troops from Jarablus, which has become a burden for it after the loss of Manbij.

Although the Turkish army is now vowing to “completely wipe out” ISIS, the real aim of the operation is to preempt an attack by the Kurdish militia towards Jarablus. Following recent victories against ISIS, culminating in the liberation of Manbij on August 12, the Kurdish YPG (Peoples’ Defense Units) and allies control a very large part of northern Syria, with the exception of the swathe of land between Jarablus and Marea. The US wanted them to march on ISIS’ main base in Raqqa, however, Kurds announced the establishment of military councils to liberate Jarablus and Al-Bab, so as to unite their cantons in the north.

Despite all its rhetoric, the Turkish government does not really see ISIS as an enemy. ISIS has controlled Jarablus since July 2013, and so far, it had never occurred to Turkey to launch an operation. On the contrary, Turkey perceived ISIS as a bulwark against the Kurdish militia. Numerous regional and Western journalists have indicated that Turkey is supplying arms and materials to ISIS, and buying crude oil from the group to be processed in state refineries. Turkey also supports other radical Islamist groups part of the so-called Army of Conquest, which are now in control of the Idlib province and southern Aleppo. The ground forces that now march on Jarablus hail from these radical Islamists, such as Sham Legion and Noureddin Zenki Movement, which decapitated a child on video last month, although they are described as “Free Syrian Army” -the existence of which is disputed by many.

So Turkey simply wants to replace one radical Islamist group, unable to stop the Kurdish forces, with others under its direct control. It is not an operation against “terrorists”, but simply a maneuver to block the advance of the most progressive force in Syria, the Kurdish militia.

Indeed, Syrian Kurdish leader Saleh Muslim wrote on his Twitter account, “Turkey is now in the Syrian quagmire, and will be defeated like ISIS.” In response, Turkish Foreign Minister threatened that Kurds have to abandon Manbij and retreat to the east of Euphrates, or else “face our ‘hammer-like’ response.”

Holy union against the Kurds

In fact, not only Turkey but the major forces involved in Syria seem to have turned their back on the Kurds following their latest gains.

US Vice President Joe Biden arrived in Turkey on Wednesday, and stated that the US supports Turkey’s position, demanding Kurdish forces to abandon Manbij. So far US warplanes had backed the Kurdish militia, the only force capable of stopping ISIS on the ground. Yet the US is also aware that the Kurdish advance risks alienating its NATO ally, Turkey. In fact, after the failed coup of July 15 against the Turkish government, the Turkish president Erdoğan had implied that US could be behind the coup, and the relations between the two countries had soured. It may be argued that the US has now decided to allow Turkey to invade Jarablus before the Kurds, to prevent a further Turkish pivot towards Iran and Russia (and also to check the power of the Kurds).

Even before the failed coup attempt, Turkey had started to cozy up to Russia and Iran, apologizing for downing a Russian plane in November 2015. Right after the coup attempt surfaced, Iranian diplomats called Erdoğan to announce their full support, even as their American and European colleagues waited to see which side would prevail. The seasoned Iranian diplomats are cognizant that Assad’s ground forces are exhausted — as can be seen in Hasakah or Aleppo — and that they eventually need to strike a deal with Turkey, one of the main backers of radical Islamists in Syria. Iran and Turkey also share a common animosity against the rising influence of Syrian Kurds, which could encourage their own Kurdish subjects. On the other hand, some journalists suggest that Russia does not want Assad to fully prevail against the Islamist opposition, since the continuity of a low-intensity conflict would indeed give Russians the perfect pretext to maintain their military presence in Syria—just like in the Caucasus region. As a result, Russia and Iran may have given the green light to a limited Turkish incursion, even though they have officially stated their concerns over Turkey’s ground operation.

There was intense shuttle diplomacy between Turkey, Iran and Russia in recent weeks, during which the Turkish government implied that it could now accept a transition with Assad. This was followed by Syrian air and land forces’ attacks (which failed bitterly) on the Kurdish-controlled town of Hasakah, the first major regime assault against the Kurds since the beginning of the conflict. Meanwhile, ISIS organized a suicide attack in the town of Gaziantep in Turkey, killing 54 people in a Kurdish wedding ceremony. Turkish intelligence knew the plans for such an attack, yet did not take any action to prevent it.

The war against the Kurds also serves Erdoğan’s domestic policy purposes. Despite the extensive purge in the state apparatus following the coup attempt, Erdoğan has implied that he still does not have full confidence in some sectors of the general staff and the national intelligence service. Precisely for this reason, Erdoğan chose to improve his relations with the bourgeois opposition (center-left CHP and ultra-nationalist MHP), virtually creating a nationalist bloc which culminated in a demonstration attended by one million people in Istanbul. Many ‘opposition’ MPs, far from criticizing the state of emergency declared by Erdoğan, instead employ his arguments accusing the coup-plotters of every problem in Turkey.

As such, a military maneuver towards the Syrian Kurdish provinces is also an effective way for Erdoğan to bolster this nationalist bloc within Turkey, and pave the way for the constitutional transition to an authoritarian presidential system. Unsurprisingly, CHP and MHP leaders expressed their full support of the military invasion.

However, although Turkey thinks that it can easily have its way, a direct military involvement in the Syrian civil war brings huge risks. There is already a strong presence of radical Islamist groups on the Turkish side of the border. The invasion of Syrian Kurdistan will further fuel the anger of Turkey’s Kurds towards the state. As such, the road seems to be opened for an escalation of inter-ethnic tension and conflict within Turkey as well.