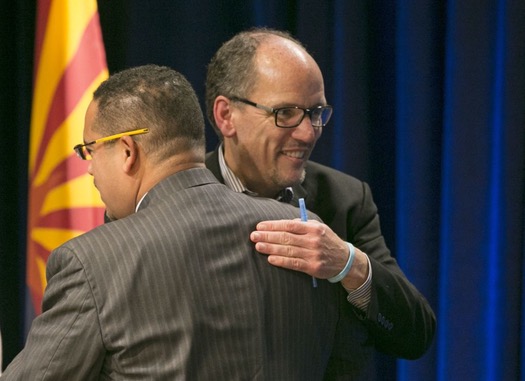 After months of campaigning, establishment favorite Tom Perez has won the DNC chairmanship. For weeks, it was unclear whether Perez, supported by Joe Biden and, implicitly, Barack Obama, would defeat Keith Ellison, endorsed by Bernie Sanders and Elizabeth Warren. The race in some ways appeared to re-open the Sanders-Clinton divide in the Democratic party. In the end, Ellison lost by 35 votes (235 to 200).

This election occurs in a very particular political moment. Trump’s election was an unexpected blow to the Democratic Party, which actively worked to make Trump the Republican candidate in the hopes that this would make it easier for Hillary to get elected. This was clearly an erroneous calculation. To make matters worse, the Republicans now also control the House, the Senate, and most local and state legislatures. At the same time, the resistance movement against Trump has been organizing large-scale actions, from the massive January 21 protests, to the airport protests, to “A Day Without Immigrants.” In this context, the Democratic Party is attempting to rebuild itself and has chosen Tom Perez to lead the party in this endeavour.

The vote for DNC chair is not open to anyone — not even to any Democrat. The voters are the chairs and vice chairs of each state’s Democratic Party who are elected or appointed on a state by state basis.

Perez was Secretary of Labor under Obama and served as Assistant Attorney General in the Civil Rights Division of the Justice Department during the Bush Era. He is considered part of the Clinton-Obama wing of the Democratic party, as he backed Clinton in the primaries. After Ellison joined the race and was clearly a favorite, Perez entered the race at the behest of Obama administration officials.

As many have argued, there are few programmatic differences between Ellison and Perez; mostly, the differences boil down to which wing of the Democratic Party each represents. Clio Chang in The New Republic argues, “Both have strong progressive records, both have support from various unions, and both have broadly similar ideas on how they want to reform the DNC. Perez supporters are quick to emphasize that, as ‘the most liberal member of Obama’s cabinet,’ he is just as progressive as his opponent.” This understanding has been echoed by the media, as the DNC chair debates have made it exceedingly clear that the agreements between Perez and Ellison far outweigh the disagreements.

Given this lack of substantial programmatic differences between the two, it is significant that the Obama wing of the party encouraged Perez to run against Ellison, a move that was likely intended as a snub of the Sanders wing of the Democratic Party. Picking up on this, the New Yorker reports, “Several people I spoke to, however, described an Obama acutely interested in its outcome… Ellison’s connection to Sanders is worrisome for many of those in Obama’s orbit, as well as Clinton’s, and Sanders hasn’t helped ease their concern during the D.N.C. race.” The Obama wing, in nominating Perez, saught to maintain control of the party.

However, since entering the race, Perez has made the unity of the Democratic Party a central part of his message. He was consistently careful not to oppose Ellison too much, emphasizing points of agreement. After he won, he and Ellison appeared in a press conference together, Ellison donning a Team Tom pin and Perez an Ellison for DNC pin. For his part, Ellison stressed the importance of unions in his acceptance speech and the need to build a Democratic Party that would fight for unions.

Many see the Perez win as a re-run of the Clinton-Sanders primary, demonstrating that the Democratic party is indeed an establishment party in which workers and young people’s opinions are unwelcome. This sense was reflected in the fact that when Perez was announced as the winner, a part of the audience tried to shout down out-going DNC chair Donna Brazile, chanting “Party for the people, not big money!”

Yet, this critique is based on the assumption that that if Ellison had won, the Democratic party would be a party for workers and young people radicalized by the current political moment. Nothing could be further from the truth.

Ellison announced his run for DNC chair only a few days after Clinton’s astounding loss, vowing to re-energize the party and build a party that could win elections. He was an early supporter of Sanders in the primaries and then supported Clinton in the general election. He was previously a community organizer and was generally seen as the more progressive candidate in the race. For this reason, he was supported not only by Sanders and Warren, but also by unions like the AFL-CIO and by the growing Democratic Socialists of America.

Ellison was the first Muslim to be elected to Congress, and his faith made him the subject of attacks within the Democratic Party. During his run for chairman, Ellison’s past writings defending the Nation of Islam “resurfaced” in the hands of the media. Wealthy donors to the Democratic Party joined the smear campaign and publicly condemned Ellison’s supposed anti-semitism– allegations with no proof whatsoever. Since then, Ellison has had to discuss the topic again and again.

The Muslim baiting within the Democratic Party is certainly consistent with the Patriot Act extension passed under Obama, which disproportionately attacked Muslims, but it is also very much contrary to the flowery rhetoric of inclusion employed by the party. Furthermore, at no point did Ellison or any other candidate forcefully call the anti-semitism accusations what they really were — attacks on Ellison based on his religion. Rather, he entertained the questions in debate after debate. In the last debate, he even spoke about his support of Israel, saying, “Here’s what I say. I voted for $27 billion in bilateral aid to Israel over the course of about six or seven votes… I believe that the U.S.-Israel relationship is special and important. I have stood for that principle in service in my whole career, and you can trust when I’m the DNC chair that relationship will continue. We will maintain the bipartisan consensus of US support for Israel if I’m the DNC chair.”

Although Ellison was Sanders’ candidate, he expressed little of Sanders’ anti-establishment sentiment. He spoke very little about Wall Street and the 1% and about wanting to eliminate their influence in politics. He did not confront “establishment” candidate Perez and in some debates even allowed Perez to appear more progressive than him. Take the closing statement in the most recent DNC debate, in which Ellison said, “The DNC chair has to win elections and on this stage, I think I have won more elections than anyone” and later “I’ve raised over a million dollars for my state party.” These statements not only position Ellison as very much part of the political establishment, with no delimitation from the more conservative wing of the Democratic party, he also discusses the money he raised with no mention of a plan to combat the corporate interests in the DNC. Earlier in the debate, he joined with other nominees in defending their decision to attend a fundraising event rather than the millions of women at the Women’s March. This, along with his calls for unity in the Democratic Party and the complete lack of focus on differentiating himself from the Democratic political establishment in the debates, demonstrates that his rhetoric has little in common with Sanders.

Where is the Democratic Party going?

The Democrats are attempting to rebuild themselves after a profound crisis that began with anti-establishment candidate Bernie Sanders who drew millions with his message against money in politics and the profound inequalities in society. The DNC at the time did everything they could to ensure that Sanders, who polled better against Trump, lost the primary. The Democrats then went on to deepen their crisis with the loss of the Presidency, of the House, and of the Senate. Before the DNC election, it was evident that the Democratic Party had chosen a message of returning to grassroots strategy, to community organizing, and to a 50 state strategy. The central issues were not Wall Street, the 1%, or corporate greed and this would be true even if Ellison won the election.

Yet, the Democratic Party wants to paint itself as progressive and as the most effective leadership to resist Trump. That is why it is essential for them to position themselves as representing Sanders’ base. Perez spelled this out in his acceptance speech saying “We are at a ‘where were you?’ moment in American history… Some day they are going to study this era in American history, and they are going to ask the question: Where were you in 2017 when we had the worst President in US history? And we will always be able to say whether you are sitting here, whether you are sitting outside, or whether you looking on across America, we will always be able to say that the united Democratic Party led the resistance…” Perez spells out the Democrats’ strategy for rebuilding itself perfectly clearly: they will use the Resist Trump movement to get elected across America.

The Democrats plan to use a movement that resists xenophobia and anti-immigrants sentiments to elect more Democrats. This is the party that deported more undocumented immigrants under the last administration than under any other in history; the party of Bill Clinton, who began construction of a border wall; and the party of Hillary Clinton, who voted in favor of such a wall in the 90’s. The Democrats want to lead a movement against the virulent anti-Muslim policies of Donald Trump when it was Obama who dropped three bombs an hour on the 7 countries affected by the Muslim Ban, a list that the Obama administration drew up. The Democratic Party, whether led by Ellison or Perez, is not a party for the working class and oppressed. Those who are in the streets fighting against Trump’s policies must also fight against the Democratic Party, which laid the groundwork for Trump.