UAW Sells Out Graduate Workers at Columbia with No-Strike Pledge

The UAW agreed to a backroom deal with Columbia University that would limit the right of graduate employees to strike for 17 months and severely weaken their bargaining power to negotiate a first contract. The Graduate Workers of Columbia must vote it down. 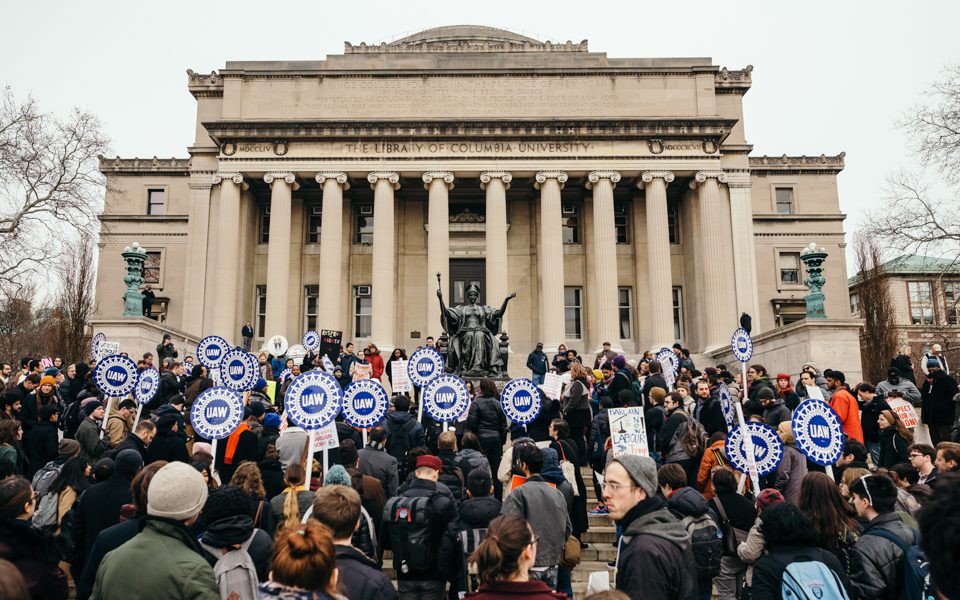 Just days before the Thanksgiving break, Graduate workers at Columbia University in New York learned that the administration had finally agreed—after years of stalling—to formally recognize the Graduate Workers of Columbia (GWC-UAW 2110) union and had agreed to a proposed bargaining framework for future negotiations.

This announcement was initially met with great celebration by many graduate workers at Columbia who have been fighting tirelessly to first build and then win recognition for their union since 2014. This jubilation, however, quickly turned sour as the details of the proposed negotiating framework and the process by which it was developed began to surface.

Not only had the United Auto Workers (UAW) bureaucrats negotiated the framework in secret, but they had done so without the input or involvement of any of the members of the bargaining committee, union organizers, or the wider membership. Worse, these same UAW negotiators had agreed to a framework that strictly prohibited any strike activity until April of 2020, a move that many union members have rightly argued would strip them of their most powerful weapon to win a swift and decent first contract.

Within hours of these revelations the GWC bargaining committee and union organizers called emergency meetings to debate how best to respond. Though the bargaining committee did not reject the framework, they did agree to put the question to the larger membership and let them decide whether to accept or reject the proposal. Since then organizers and union activists have been agitating for members to reject the bargaining framework. So far these members have collected hundreds of signatures from union members pledging to vote no, and preparations for a proposed December 4 strike seem to be continuing apace.

The GWC has been trying to force the university to come to the negotiating table since it began agitating for a union in 2014. This struggle came to a head last April when the UAW and the GWC called a week-long strike of graduate employees. These strikes, which included thousands of Columbia Graduate workers, were a significant display of power and solidarity and were joined by hundreds of local unionists from across the city, including members of the building trades, graduate employees from NYU and the new School (SENS-UAW), and members of other higher-education unions such as the PSC-CUNY.

Although largely successful in calling attention to the university’s stalling tactics, the fixed end date and the unwillingness of the bargaining committee to continue the strikes into the final weeks of classes meant that the university had no reason to concede to the union’s demands and, not surprisingly, they waited it out with little disturbance to the academic calendar or the university’s reputation. Although several hundred members pushed to continue the strikes indefinitely, the UAW was content with a symbolic show of force. As a consequence, union members have confided that they felt pessimistic after the strike and worried that, without some kind of victory, other members might be less willing to come out for future strikes.

Thankfully the graduate workers seemed to draw the right lessons from April, and last month the bargaining committee agreed that this time they would hold a month-long strike beginning December 4 and extending past the end of finals. Unlike the first strike, this one, which threatens to disrupt the entire university and leave many students without fall grades, has caught the attention of the university, and it is clear that their sudden willingness to negotiate is a direct result of this strike threat.

And this is precisely why the UAW’s concession of a no-strike pledge was such a betrayal. Rather than recognize the university’s willingness to negotiate for what it was—a clear sign of weakness and fatigue—the UAW took the opportunity to quickly put an end to the struggle and find the least confrontational way towards a normalization of relations between the university and the union. Rather than involve the actual union members in these deliberations to push for a fair negotiating agreement and a good first contract, the UAW seems instead to be working with the bosses to find a solution that is most amenable to them, regardless of how it might affect the graduate workers they represent. And unfortunately such tactics are a common feature of business unions like the UAW, which too often care more about memberships and dues than fighting the boss. As GWC member and organizer Jared Sacks explained, “the UAW wants any contract it can get, but it doesn’t necessarily care if it’s a good contract.”

But the consequences of this agreement are even worse than they seem. The no-strike pledge is effectively a poison pill. If the union agrees to the proposed bargaining framework they will lose all of the momentum that has been building since the end of the last strike, they will give up much of their negotiating power to win a good first contract, and the administration will gain valuable time to weaken the union through potential NLRB challenges and decisions made by future Trump appointees. The union bureaucracy is effectively sending the bargaining committee to the table with their hands tied. Unfortunately, the situation is not that easy to undo. If the union votes no, they run the risk of losing the moral high ground and alienating their less radical members who may not be as eager to strike knowing that the university is now at least ready to bargain.

This is precisely why the UAW bureaucrats should never have agreed to such a framework and should have engaged the entire membership of the union in its deliberations with the university. Back-door deals and secret negotiations are never in the interests of the rank and file, and the members of the GWC need to send a clear message to the leadership of the UAW: “this is our union!”

The GWC bargaining committee and activists, recognizing their own power and the weakness of the university, should wrest control of the negotiating process from the hands of the UAW bureaucracy, boldly declare their rejection of this rotten “no-strike” pledge, and aggressively step up preparations and mobilizations for the December 4 strike. Such a strike must include demands for the immediate recognition and of both the GWC-UAW union as well as the Post-Doctoral union also represented by the UAW, protection against any and all retaliation for all of those on strike, a bargaining framework that does not include a no-strike clause, and an immediate commencement of negotiations for a first contract.