The Undercommons and UCLA’s African Activist Association hosted a conversation about global resistance against policing. Speakers halied from South Africa, Brazil, the Phillipines and Los Angeles. 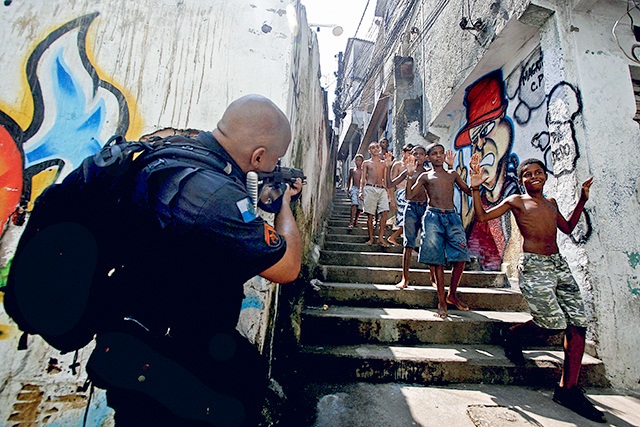 Some students at UCLA along with community organizers based in L.A. began the process of facilitating a global conversation about both student movements against injustice and the particular oppression of police violence. The conversation was organized by the African Activist Association – an organization founded in 1970 in connection with global agitation against European colonialism and anti-racist activism in the United States. It was also organized by The Undercommons, a collective founded at UCLA after the University of Missouri protests in 2015 that links social movements to university resources. The conversation featured organizers speaking on police violence in Brazil, the Philippines, South Africa, and Los Angeles, and was held in “The Black Forum” at UCLA.

Khabo Ramoupi and Neo Lekgotla Iaga Ramoupi discussed the police response to the #FeesMustFall protests in South Africa. Neo claimed that the violent crackdown by police represented a shift in the relationship of the police to the university, compared with the more cautious relationship maintained by the previous Mandela and Mbeki regimes. Neo outlined how increased corporatization had pushed more and more campus labor into subcontracted work – citing that there were even some workers made to clean campus toilets that they were then not allowed to use! He credited an alliance between protesting students and local unions with helping to fuel protests and other direct actions. Khabo pointed to a generational difference in perceptions of police between an older generation that experienced legal apartheid and constant armed repression from police patrols, and an initially hopeful but now increasingly disillusioned younger generation.

Tatiana Cozzarelli, a Brazilian-American writer for Left Voice and militant of the Movement Revolucionario de Trabalhadores (Revolutionary Workers Movement) spoke on police violence in Brazil. Tatiana explained that there is a tight connection between race, class, and policing that owes itself to Brazil’s particular relationship to the institution of slavery. Black Brazilians are overwhelmingly concentrated in Brazil’s working classes, living in its poorest and most heavily policed neighborhoods. Brazilian police kill more people, most of whom are Black, than any other police force in the world. This policing has increased over the past few years in cities like Rio de Janeiro, host of the 2014 Fifa World Cup and the 2016 Olympics. There, the police kill people who live in the favelas while hyper policing tourist areas that are used by people of different class positions, like the beach. Police in the favelas – literally called the “policia pacificadora” or the “pacifying police” – exist to keep the “peace” in a city fractured by capitalist contradictions. “When we fight the police we fight against the glue that holds the capitalist system together. Our struggle against police and against capitalism are connected” said Tatiana.

Nap Pempeña organizes with Anakbayan Los Angeles, a community organization that works across the Filipino diaspora but is based in the United States. Nap noted some similarities in the political personas of President-elect Donald Trump and President Rodrigo Duterte of the Philippines . Duterte is using the police force to commit thousands of extrajudicial murders – an approach Trump deems the “right way” to handle a war on drugs. Nap also emphasized the importance of an internationalist analysis urging Filipino American community to explore the conditions that drove Filipino migration to the U.S.

In particular, this requires contending with the state of the working class in the Philippines, as well as the role of the U.S. in maintaining corporate interests by lending material support to the Philippines’ police and military arms of state repression. Nap also pointed out that a campaign for US divestment of its public funds from these arms of state repression in the Philippines has not yet been able to get the necessary traction. It is necessary not only because foreign state aid funding kills Filipinos and other but also because US government funds the killing.

Mimi Soltysik works with Stop LAPD (Los Angeles Police Department) Spying Coalition, and also ran for President in the U.S. on the Socialist Party USA ticket with Angela Walker. Mimi talked about the importance of activism that makes material differences to organizers and communities. The Stop LAPD Spying Coalition had succeeded in grounding LAPD drones and continues to mount meaningful opposition to LAPD surveillance regimes, especially ones that target activists. However, work remains to be done. The Stop LAPD Spying Coalition is currently battling an FBI “Stop Violent Extremism” measure that attempts to enlist public school teachers and other employees in surveillance of young potential activists. Los Angeles teachers have strongly opposed to the FBI measure. Mimi further noted that organizing with different skill sets and diverse politics had not prevented the coalition group from being practically effective.

All of the speakers and other attendees agreed on the importance of international connections and thought, even while going after local political goals. Self-consciously international organizing strategies will continue to be important as the right wing makes its global resurgence. This means building on existing transnational struggles like the fight for justice in Palestine, as well as proactively taking on new battles against oppression.

These struggles are up against a police force informed by an international consolidation of repressive tactics. The tendency of police departments to defend capital respects neither borders nor jurisdiction. The water protectors at Standing Rock faced police opposition from 24 different counties from across the United States, while the protesters at Ferguson confronted a riot force trained in Israel. The increasingly militarized police tactics and technology used in the United States set precedents that will no doubt show up in the police departments of cities in the Philippines and the military patrolling its countryside.

Police serve the demands of securing global capital, whether through defending its ideology against the decolonizing demands of the protesting students of South Africa or protecting its material investments from those who work in its mines. Police serve as the system’s first lines of defense against popular resistance movements.

Our adversary is global. Our resistance must be too.