Venezuela: What is the real political and class content of the Reform? 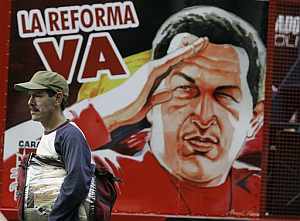 –1. What is the government’s project?

In order to understand clearly what the Reform seeks, it is necessary to begin by clarifying what the project is that President Chávez embodies. As we have always indicated, if we follow the real politics of the government beyond the high-sounding rhetoric and phrases against capitalism, it is easy to realize there is no revolutionary, anti-capitalist project. Unless one is unwilling to see, it is obvious that the capitalist structure of the country continues to be the same one inherited from the Punto Fijo pact: private property (and capitalist exploitation) exist in industries, enterprises, banks, businesses, and the countryside; it coexists with state ownership of PDVSA and some other enterprises. In addition, the structure of social classes and the position of each class in the productive and political system continue intact: the workers (of city and countryside) produce everything, and they own nothing more than their own wages; the capitalists exploit labor power and are the owners of what has been produced. The state and its institutions continue to be the same, and for that reason the working class and the poor have no mechanism with real power that would permit them to lead the country. This, in spite of Chávez’ having already been in power for more than 8 years, in spite of the fact that popular mobilization and workers’ action have put the capitalist reactionaries on the ropes on more than one occasion!

In reality, Chávez’ rule represents bourgeois nationalism, that is, an attempt to develop national industry and production by the hand of the “productive” capitalists, with the search for greater independence from imperialist capitals and the US. An alliance of the state, which manages PDVSA and its revenue, the “productive” and “nationalist” sectors of the Venezuelan business class, beside the oil and gas transnational corporations, with those that are renegotiating for themselves the conditions of exploitation of the country. That is the fundamental basis of Chávez’ economic policy. To this, the deciding factor in the government’s economic plan, is added financing for productive small businesses (cooperatives, micro-enterprises, etc.) – which have no real weight in the Venezuelan economy – as well as designating part of the oil revenues for plans to try to alleviate the most urgent needs of the poor, or to meet unpaid wage and social security commitments to the workers. Nothing in this scheme of “socialism with businessmen” is going to change with the Constitutional Reform.

–2. A reform to deepen the Bonapartist character of the regime

However, this project faces a society characterized by strong social and class confrontation. This is a project that seeks to “develop” Venezuela by basing itself on, and promoting, some specific sectors of the Venezuelan bourgeoisie, while, at the same time, having to reckon with a mass movement that, since February 27 and 28, 1989, has very forcefully entered the Venezuelan scene, by administering the death blow to the bourgeois regime of that time, a mass movement that is now still waiting to see most deeply-felt social and political demands resolved.

For this reason, the government needs to have constantly increasing power in its hands, since, to develop such a program, Chávez needs to act as “arbiter” [referee] between contradictory class interests, fundamentally between the workers and the poor, on one hand, and the capitalists, on the other; but also between the struggles of different sectors of the Venezuelan bourgeoisie, as well as between the interests of the whole Venezuelan business class and the imperialist capitals. Chávez is trying to elevate himself and his government as the great regulator of the class struggle, by making some concessions and also disciplining, as he believes it to be necessary, both the mass movement and the factions of the dominant classes that may not submit to his political project. This is what Marxist theory calls Bonapartism. The PSUV and now the Constitutional Reform, are the political and legal instruments with which Chávez is determined to advance on this terrain. Thus, in what refers to the working class, Chávez seeks to make sure that experiences like that of Sanitarios Maracay, – where the workers, still trusting Chávez, took up for themselves the struggle against capitalism with their own class methods and went beyond the government’s politics of agreements with businessmen, even going as far as confronting the government itself, – that such experiences do not arise forcefully, or, to limit them when they are already a fact.

Regimes with similar characteristics, like Perón’s first period in Argentina, or Cárdenas in Mexico, also had mechanisms to coopt and control the mass movement: in Perón’s case, controlling the workers’ union organizations through the combination of concessions and punishments, going as far as putting the CGT (Central General de Trabajadores) [union federation] under the discipline of the [Peronist] Partido Justicialista; in the case of Cárdenas, the workers’ and campesinos’ organizations were also coopted by the state, forcing them to participate in the internal elections of Cárdenas’ party, even when they were formally independent from it.

–3, And the right-wing opposition?

a) Why are they campaigning for a “No” vote?

Therefore, beyond the generalization of seeing the opposition of the “right wing” to the Constitutional Reform, we should make these definitions concrete, in regard to the question of social classes. It is clear that the bulk of the Venezuelan bourgeoisie and the landowners do not recognize this government as their own, they do not trust it, and, if they had the strength, they would remove it from power, but it is no less certain that after their failed attempts at coups, the owning classes have kept their properties and businesses intact, “normalizing” – in a bourgeois sense – their relations with the government. Furthermore, the government clearly has effusively praised the sector of the bourgeoisie they are seeking as an ally: “productive” sectors of the Venezuelan business class (including ranchers and farmers) and the middle- and petty-bourgeoisie, that greatly depend on state protection and help. They have formed the “Confederation of socialist (!) businessmen of Venezuela,” that is encouraged by Confagan and Empresarios por Venezuela, openly chavistas.

Not all the sectors of the owning classes are opposed to Chávez and his Reform; there are factions that support it. For their part, some time ago, the opposition employers’ associations decided, as a “gesture” of coexistence that the government requested of them, “to apply themselves to production and not be politically active,” so that, even when they certainly are not in favor of the Reform, they are not now playing a role of open opposition, as in the period 2001-2004, that is, there are now no threats of walkouts supported by the bosses, closing businesses, etc., as means of pressure against the government. In brief, while a sector (obviously not the majority) of the capitalists and businessmen of the countryside is chavista and openly campaigns for the “Yes” vote, the other sector is opposed, but without participating in an open political campaign, leaving the main leading role to the right-wing parties and student movement, unlike years ago, when they were the visible leadership, calling for boss-supported strikes to impose their will.

b) Why are the reactionaries opposed? What are they “crowing about” in their speech?

In this context, the campaign for the “No” vote takes place in defense of private property, “democracy,” and “political pluralism,” with a deeply reactionary character, since it is a question of the inflexible defense of capitalist ownership. While the government is not proposing to move forward against private property, the enormous concentration of power in the executive and the formal definitions of “socialism” in the Constitutional Reform, as we indicated above, give more power to a government, that, if it needs to, could act at its discretion to discipline the bourgeois or land-owning sectors that are not guided by its political program, to the advantage of state control or even control by the emerging bourgeois sector that supports Chávez. This is the real reason this sector of the bourgeoisie and its politicians talk about democratic rights, because they see in the limitation of rights a possibility [for the government] freely to attack their properties, and [the limitation of rights] also closes further possibilities of [right-wing] opposition to Chávez’ “nationalist” and “popular” project, with their bourgeois plan for the country, from positions of the state itself (governor’s and mayor’s offices, for instance).

But there is also a lot of cynicism and nerve when they denounce the authoritarian character that the government increasingly assumes. In the first place, they try to hide the fact that the “democracy” of the Punto Fijo agreement was always a profoundly repressive regime, inaugurating the evil policy of “disappeared people in democracy,” and then, to tell the truth, any bourgeois government, even if it changes its forms and methods, is still authoritarian, against working people, and still more so, in our country today, when any bourgeois project will have to fight against the movement of masses in struggle. In fact, any government of the bourgeois opposition will certainly be more “authoritarian” and repressive; the most convincing sign of this is precisely the brief Carmona administration, supported by the entire right wing, that brutally carried out part, and most, of the antidemocratic [measures] they are disputing in the Constitutional Reform: suspension of the right to due process, reducing freedom of expression, refusing to recognize the popular vote, repression, etc.

We face a Constitutional Reform proposal that seeks to increase government power to regiment the class struggle and movements of different factions of classes, on the road of its “socialism with businessmen.” This is backed by the bourgeois and owners’ sector that supports the government and receives a boost from the government, while the majority sectors of the dominant class oppose it, defending the bourgeois Constitution of 1999. In view of this setting, the workers and all the poor must bear in mind that no constitution that establishes the legal bases of capitalism is an option for the working class. Neither the 1999 Constitution, nor the present reform, is a revolutionary alternative; on the contrary, one with more or less demagogic rhetoric about democratic rights, the other [with demagogic rhetoric] about popular power, and with the present Reform [proposing] a greater concentration of power in the executive than the 1999 Constitution did, both guarantee that exploitation of the workers of the city and countryside will continue. Both establish the framework of class society.

The Workers League for Socialism (LTS) is the Venezuelan section of the Trotskyist Fraction — Fourth International.