Workers and Activists Fight Back Against Detentions of Muslims

Workers and activists fight back against Trump by protesting at airports across the country. They have already won a partial victory. 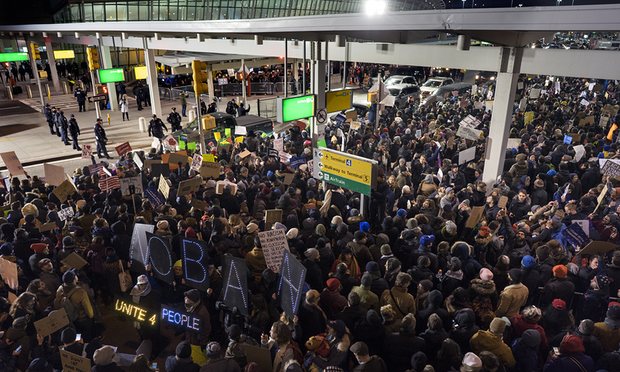 Image from The Gaurdian

Dozens of Muslim immigrants were detained at airports across the country on Saturday after President Trump signed an executive order banning travel into the U.S. from seven majority-Muslim nations. It is clear that Trump intends to carry out, to the best of his ability, his racist and draconian campaign promise to ban Muslim immigrants from entering the country. At the same time, he has suggested that he would allow Christian refugees from these countries to enter.

Trump’s order and today’s detention of Muslim immigrants, nearly all of whom reportedly hold U.S. green cards or visas, has sparked outrage across the country. Hundreds of people have mobilized in only a few hours’ time to airports in New York, San Francisco, Los Angeles, Philadelphia and elsewhere to demand the release of all detainees and an end to Trump’s Muslim ban. Demonstrators shouted “Let them in!” and held signs reading “No Ban. No Wall” and “Refugees Welcome.”

The protests have already won a partial victory. Saturday night, a federal judge issued an injunction that would prevent the deportation of the detainees the time being. However, the court order is expected to affect only 100-200 Muslims who are currently detained in the U.S. It does not affect the ban on the thousands of Muslim refugees and immigrants who are currently abroad.

Video of arrivals at #SeaTac for #MuslimBan protest pic.twitter.com/fxd9s2hVot

In an show of solidarity with detainees, New York taxi drivers held a one-hour work stoppage, refusing to pick up any passengers at JFK. While still limited in scope, the drivers showed that worker solidarity will be critical to a successful fightback against Trump’s reactionary campaign against Muslims and immigrants.