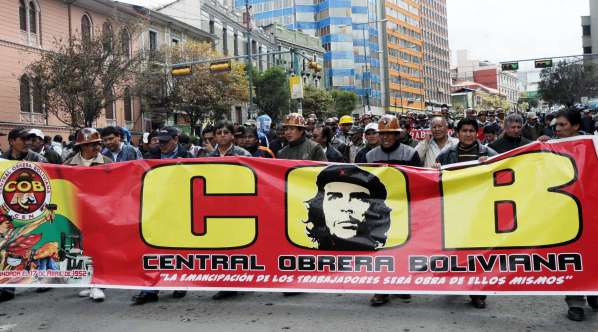 On Tuesday, May 21, after 15 days of a general strike with road blockades, the Central Obrera Boliviana (COB) began a break of 30 days in the measures of pressure, on accepting the offer of Evo’s government to lower the retirement age for mining from 35 to 30 years, in addition to which, the pension will be calculated on the basis of the most recent 24 pay stubs while employed. This decision was harshly challenged by big groups, like city teachers’ federations, miners’ and healthcare workers’ groups, who denounced this decision as a betrayal of their aspirations for an income of 100% of the salary they got while employed. In the following lines, we try to draw the main lessons of the conflict, as well as understanding the new political moment that this conflict is opening up.

A workers’ action without precedent in the last two decades

The starting point for any serious analysis of the conflict is registering that these two weeks of conflict, will enter the world of concepts as “the days of May” of the Bolivian working class. Not because the workers were on the verge of taking power, nor because the result of the struggle will be that of a forceful and extremely clear victory over the anti-worker policies of the government of Evo and García Linera, nor because of the number of dead or wounded that the conflict has left. “The days of May” are becoming a starting point because they mark a qualitative leap in the recomposition and re-emergence of the Bolivian working class. A class that suffered a big defeat with the beginning of the neoliberal cycle in the middle of the 1980’s, with tens of thousands of layoffs, unemployment, job insecurity, the loss of the rights of union organization, the activists’ leaving the union, and the workers not following the COB nor many important organizations.

Beginning with this extremely big defeat a little more than 25 years ago, the activism of the working class had a defensive and partial character. Except for times like the action of the Huanuni miners in the October 2003 national uprising or the role of the manufacturing workers’ federation and the COD of Cochabamba during the water war, the workers’ organizations and, more generally, the workers acted in a weakened fashion, as part of the people and the peasants’ movement. However, this most recent conflict is not only one more link in the efforts at workers’ recomposition, efforts that began with the manufacturing workers’ rebellion of 2010, the struggles over wages in 2011 and 2012, the valiant resistance by the health care workers against the attempt to extend the working day, without the consequent wage compensation and rights, but it opens a new moment in the working class and changes the national political map.

During the 15 days of struggle, hundreds of thousands of workers occupied between 35 and 40 points of blockade on the national routes, massive mobilizations in all and each one of the departments, strikes by teachers, healthcare workers and at some mining firms, as factory workers show that the social subject, that was given up for dead, for finished, is showing that it is alive and that it is beginning to recover an ability for struggle, that was not seen in these two decades. Teachers, miners, factory workers, public health workers, municipal employees, and different groups marched and fought together throughout the country, in addition to the fact that they were beginning to radicalize the measures in different places of the country.

This big independent workers’ action is what provoked the anger of the government of Evo Morales and García Linera, and what motivated a McCarthyite attack against the workers, like the prohibition of the right to strike, the arrest of more than 400 workers in different places of the country, the prosecution of dozens of comrades, including the house arrest of Vladimir Rodríguez, Executive Secretary of the Oruro COD, the defamatory campaign against the leaders and against the struggle, with the accusation of a conspiracy and a coup d’état, up to the slanders and falsifications against the socialist and revolutionary left that raises the banners of Trotskyism. The government of Evo and García Linera had to resort to the tactic of mobilizing the organizations of the peasants’ and indigenous people’s bureaucracy, to be able to counteract the power of the workers’ mobilization. Only at times of a profound national crisis has the MAS resorted to the mechanism of manipulating the peasants.

With this conflict, the pro-employer and pro-business role of Evo’s government has been revealed. Evo systematically refused to increase the employers’ contribution for the workers’ pensions. The MAS prevented increasing the government’s contribution, keeping the core of the neoliberal system of pensions, based on the individual contribution and compounding. For this reactionary purpose, it resorted to all the possible mechanisms, from repression, lying, and falsification, up to the attempt to set one group of the poor against another, by mobilizing peasant groups against the workers’ blockades. With this conflict, it is the government itself that ends up consolidating a workers’ opposition to the government, an opposition that during the previous months had a social and union character, but after such a struggle is being transformed and consolidated as a political opposition to the MAS, from the left.

If the workers were discussing the launching of the Workers Party some months ago, after this most recent struggle, what is revealed is not only the need for, but the urgency of organizing this new political formation of the workers as an expression of the tendencies to reorganization of the workers, who have confirmed that from the government of the MAS, the wage earners and the urban and rural poor can expect little or nothing.

Some lessons from the struggle: If the capitalists do not pay, we workers pay!

The conflict was a difficult one, not only because we are facing the presence of a strong government, that is enjoying an economic bonanza, that, according to some studies, has accumulated foreign currency in the last 5 years, equivalent to all that which was collected in the last 25 years of governments previous to Evo. A government that, as a result of formal democratic concessions, is even managing to contain and establish its hegemony over broad swaths of peasants, and of trade unionists and the urban poor, which allowed the big strike of the COB to be limited to the wage earners and some signs of popular sympathy, but that were essentially passive. Facing this scene, the leaders did not measure up to the movement that they unleashed, being frightened by the scale of the mobilization and trying to contain the movement, in extremely passive measures, like the “vigils” that exhausted and wore down the vanguard of the miners, in addition to the fact that they prevented deploying all the strengths and energy of thousands of workers that joined the conflict everyday.

In the first place, a policy was needed that showed that the government was not defending the interests of the poorest people, as official publicity asserted, but that it was defending corporate and capitalist interests. The leadership of the COB limited its demand to the government contribution, when what had to be clearly set out is that it was necessary to restore the employer’s contribution, eliminated by Sánchez de Losada, an elimination kept by Evo. In the second place, it was necessary to show that the Dignity Income [pension] is, in reality, an income worthless for survival, since no one can make it with the sum of 250 bolivianos [$35.66 USD, monthly]. It was necessary to overcome the unions’ self-interested behavior and openly enter the political arena, showing that there was a need to fight for a universal income equal to the minimum wage. This policy would have shown, to hundreds of thousands of peasants and the urban poor, that Evo was lying, that, instead of defending the poorest people, he was defending the capitalists, since a universal income based on the minimum wage could only be guaranteed with clearly anti-capitalist measures and financed by the rich. Such a policy would have helped break the isolation of the workers and would have allowed new and more detachments of the people to join the struggle. Finally, in the third place, these measures and these demands could only have been used if the struggle acquired forms of democratic organization, based on the rank and file workers, who were the ones that carried out all and each of the measures of the struggle. What was needed was the formation of a National Strike Committee, that, based on delegates elected in assemblies and open to all the organizations committed to the workers’ struggle, could expand and democratize the leadership of the conflict, strengthening the COB and limiting Trujillo’s policy, based on fear of the mobilization, on exhausting vigils, and on a dialogue that never flourished in the service of the workers.

Advance with the Workers’ Party, a working-class alternative political organization

The outcome of the conflict is activating a new level of reflection of the workers’ vanguard. The key is not demoralization, but reflection and anger against a government to which thousands of workers gave their trust and their democratic and social aspirations. Next June 28 and 29, in the Department of Oruro, the Second Congress of the Workers’ Party (WP) will be carried out, where the documents approved at Huanuni should be confirmed, against the attempts to dilute the most anti-capitalist aspects of the party, as well as reaffirming the need that this party should be the organic expression of the unions and the workers. During the 15 days on strike, we insisted and sent a letter to the provisional leadership of the WP, that it should intervene in the conflict, since we want a party that, in addition to participating in the 2014 elections, will be principally a class-struggle party, that is, a fighting party of the working class. Unfortunately, the provisional leadership subordinated itself to the logic of separating the union intervention in the struggle from the necessary political struggle, which weakened the defense of the conflict in the face of the attacks from the MAS. Facing the nearness of the Congress, the struggle that is posed has to do with the need to overcome narrow self-interested behavior, in order to formulate a program from the workers, for all the oppressed and exploited people of the country, as the Pulacayo Theses recommend.

A program that will respond to all the poor, as, for example, a universal income that will really be dignified, respect for the right of self-determination of the original peoples as in the TIPNIS, land to the peasants’ movement that, after 7 years of Evo’s government, still finds itself forced to seize lands in the east, confirming the preservation of the large estates by Evo and García Linera. These basic measures are so that the working class can make the jump from its current position of a workers’ opposition to the MAS, to gain hegemony over all of the oppressed nation and finally become the class that leads the movement of the peasants and the poor. Only on this basis will it be possible to clear the way towards a profound social transformation that can only be the workers’ and socialist revolution.