A Call for a More Militant May Day

On May first, leftist groups around the world recognize May Day amidst the backdrop of an emboldened right-wing bent on exploiting and oppressing us in order to further enrich an insatiable minority. What are the militant origins of May Day (also referred to as or International Workers’ Day) and how should socialists carry on its legacy today? 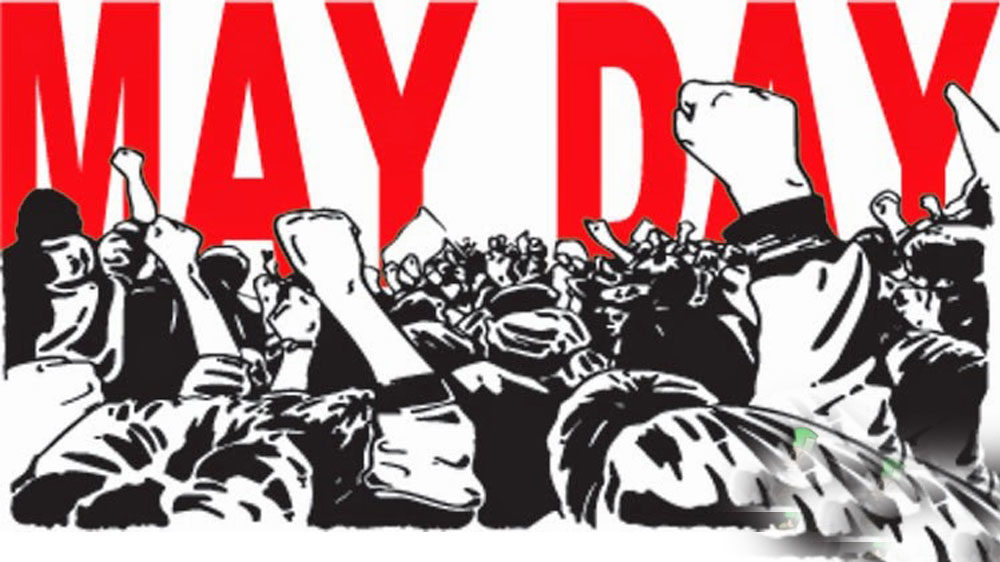 In 1886, on May first, over 350,000 workers from nearly 12,000 workplaces throughout the United States courageously held coordinated strikes. Chanting  “eight-hour day with no cut in pay” the workers demanded the legal establishment of shorter work hours, a response to the horrendous working conditions they were subjected to in factories, where 14-18 hour days were the norm. It is important to note that this action was facilitated in large part by  anarchists, socialists and other labor organizers who organized strikes by this hyper-exploited working class.

Two days later four striking workers at the McCormick Harvesting Machine Company in Chicago were killed and countless others injured by police protecting strikebreakers who had crossed the picket lines.

The next day,  May 4th, local labor activists staged a large rally at Haymarket Square to draw attention to the police repression that had taken place the night before. Socialists and anarchists spoke passionately to the 3,000 workers who gathered despite the rain about the eight-hour movement and the brutality of the police.  Just as the rally came to a close, police marched onto the peaceful crowd in an effort to disperse the rally.

As the police advanced, a person whose identity is still unknown threw a bomb into the ranks of the police, killing seven and injuring over a dozen. The police retaliated against the protestors, and by the time the gunshots died down hundreds of workers were injured and dozens were killed. The retaliation went further: for several days afterwards, socialists and anarchists had their homes raided and were hauled to jail.

The police blamed eight anarchist leaders for the bombing. Two of those blamed had not even been at Haymarket Square when the bomb was thrown. And yet, all but one of the eight were sentenced to death. The prosecutor, Julius Grinnel, made very clear that the reason these eight were on trial had little to do with their suspected guilt for the bomb thrown in Haymarket Square: “These men have been selected, picked out by the grand jury, and indicted because they are the leaders. They are no more guilty than the thousands who follow them. Convict these men, make examples of them, hang them, and you save our institutions, our society.”

Despite national and international protests, four of the anarchist leaders were put to death by public hanging. They were killed on November 11.

These unjust killings sparked international demonstrations and brought the fight for the eight-hour workday to the forefront. Since then, the Second International formalized May 1st as International Workers’ Day,not only to commemorate the events that unfolded in 1886 but to establish a unified day of action where workers would come together to fight against capitalist exploitation.

Demonstrations and strikes take place throughout the world on May Day. However, what are the demands of a socialist and internationalist May Day beyond these rallies? Revolutionary socialist Rosa Luxemburg shed light on her vision for May Day in her article “What are the origins of May Day?”:

“The first of May demanded the introduction of the eight-hour day. But even after this goal was reached, May Day was not given up. As long as the struggle of the workers against the bourgeoisie and the ruling class continues, as long as all demands are not met, May Day will be the yearly expression of these demands. And, when better days dawn, when the working class of the world has won its deliverance then too humanity will probably celebrate May Day in honor of the bitter struggles and the many sufferings of the past.”

Over a century has passed since Luxemburg wrote those words. Although we have technically “won” the eight hour work day in the United States, for many working class people that right has been lost due to low salaries necessitating more than one job. In capitalism, all our victories are ephemeral if we are not willing to fight to defend them.

There are some hopeful signs. Unlike many previous decades, there is an increasing number of young people who consider themselves socialists. Although we want to discuss what socialism means, it is a welcome sign to see more people interested. There is also an increase in labor struggles: the current Stop and Shop strike and the ongoing wave of teachers strikes, to name a couple.

But far from its militant origins, this May Day risks becoming merely a celebration by a small group of leftists and/or a symbolic rally put on by union bureaucrats rather than a mobilization that can make a difference in broader workers’ struggles. To avoid this defanging, contemporary socialists need to infuse a broader political vision into these events, as well as organizing in our workplaces and places of study. What are examples of issues we might take up today?

From fighting imperialist aggression to demanding a $7K per-course minimum wage, May Day is an opportunity for workers around the world to galvanize other workers and build power around important demands. Perhaps May Day’s original demand – that of control over our time – is the one that speaks the most to the everyday reality lived by many workers. In New York State, home care workers are working 24-hour shifts and are increasingly becoming patients themselves due to the effects of long shifts on their wellbeing. At the same time, nurses are working beyond their already strenuous 12-hour shifts because of chronic understaffing.

The pervasiveness of these labor struggles coupled with the increased popularity of socialist politics can give rise to a more militant May Day. For this task, as socialists, we need to organize in our workplaces and communities, telling the story of May Day, bringing up the reasons to organize and reminding folks that we can’t trust the capitalist politicians to give us our rights– the last few decades are proof that the Democrats and Republicans will take them away. We need to organize the rank and file, without any trust that voting will necessarily get us our rights, as well as against the union bureaucrats who consistently stifle working class militancy.

It is our task as socialists to organize and mobilize, so that as workers in New York, we will fight together with one fist for 7k or strike, against yesterday’s coup attempts in Venezuela and for the rights of working class and oppressed people.