A Childhood in Struggle – My Encounters with Ahed Tamimi

The Israeli filmmaker and activist Dror Dayan met Ahed Tamimi when he was documenting protests in her village. The 16-year-old Palestinian girl was arrested last week by Israeli soldiers and has become an international symbol of the Palestinian resistance. But Dror got to know her as a normal teenager as well. 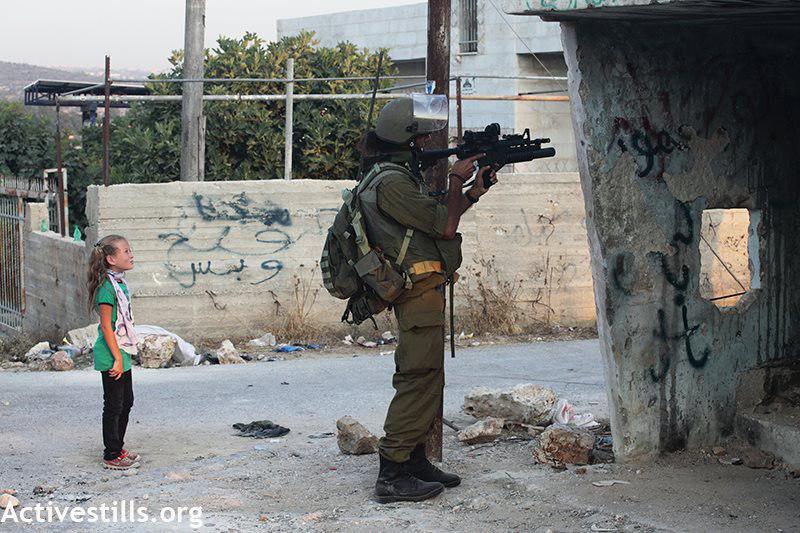 Dror Dayan is a filmmaker, originally from Jerusalem and living in Berlin. He is active in the group FOR Palestine and contributes regularly to Klasse Gegen Klasse, the sister site of Left Voice in Germany.

When the editors of the German-language website Klasse Gegen Klasse asked me to write a somewhat more personal text about Ahed Tamimi and her arrest , I hesitated. Yes, I sort of know Ahed– but maybe “know” is an exaggeration. Ahed was about eleven the first time I went to her village, Nabi Saleh, and probably around fifteen during my last visit there. Although I was at her home many times, drinking coffee with her parents after the demonstrations, she was already too grown-up to play freely with the unfamiliar guests who can’t speak Arabic and communicate per hand signals, as the younger children in the village often do. When she was old enough for an adult political conversation, my lack of language skills prevented one. Yes, I know Ahed Tamimi – mostly through nods and wordless greetings, or via the view finder of a camera.

But that’s not why I hesitated. I hesitated because I do not believe that my personal experiences in Nabi Saleh make Ahed’s story more important than others. That’s the catch in this village’s struggle – for almost a decade it has been so saturated with journalists and international activists that it almost automatically seems more important. Ahed’s case makes this clear: Since Trump’s Jerusalem decision, roughly 150 Palestinian children have been arrested by the Israeli military – and many more than that in recent years. Many are tortured and abused. But who in the West remembers the 13-year-old prisoner Ahmad Mansara, or even the murdered 18-year-old Hadeel Al-Hashlamon? Ahed’s case is not unique – nevertheless, in a matter of days she has become a national symbol of Palestinian society and an icon of the solidarity movement in the West – in a way that verges on fetishization. We must ask ourselves: would this have happened the same way if Ahed weren’t blond or if she wore a hijab like her mother, the activist Nariman Tamimi who is currently detained together with her daughter? Or if international journalists, such as this unimportant Jewish Israeli in Berlin, did not have a few cups of coffee with her father?

But Marxist methodology is also based on the dialectic between the concrete and the abstract, between the individual and societal struggle. And in this regard, Ahed’s case is certainly important. Maybe my personal experience can indeed prove helpful to put her story in the right political context.

Nabi Saleh – An epicenter of struggle

When I try to think about Ahed, one evening in the village comes to mind. I was there screening a film I shot about the village’s struggle. Ahed’s father Bassem is featured prominently in it, and Ahed herself often appears– in some scenes she’s twelve, in others perhaps fifteen. We were sitting in Naji and Boshra Tamimi’s house, whose 21-year-old daughter Nour is currently imprisoned together with Ahed. Perhaps 30 people were huddling in front of the TV. The kids were energetic and loud – it seems I had brought too much chocolate with me from Germany – and the grown-ups tired and preoccupied, some maybe even slightly bored. This certainly wasn’t the first film they had seen about themselves.

I glanced at Bassem during the film and noticed how his gaze often drifts away from the television to stare into space –a product of the torture he endured in an Israeli prison, as his interrogators beat him into an eight-day coma. During the demonstration at noon he had appeared exhausted and beaten. We were sitting on a hill overlooking the village’s well, which had been confiscated by Israeli settlers and soldiers. We watched from the sidelines as they repeatedly shot tear gas at an Israeli activist as he approached the road separating the well from the valley. Bassem told me that the activists in the village wanted to stop the weekly demonstrations and reduce their frequency.They simply lacked the necessary strength, as well as the support from outside. The scene playing out below us in the valley – a single Israeli activist surrounded by tear gas – made his words painfully visual.

The film continued on the television while I replayed the day’s events in my head. I looked from Bassem to Ahed. Bassem often talked about how the younger generation has to continue the village’s resistance when the adults are no longer able. Ahed was sitting with the other children as they snacked on the German chocolates. When she appeared on the screen, yelling at soldiers, she suddenly turned red, giggled and buried her face in her hands. This I didn’t expect.I had seen Ahed standing in front of soldiers so many times, and she was filmed doing it just as often. Why was she feeling uncomfortable now, in her relatives’ house, surrounded by family? Without the adrenaline and emotions of the demonstration, the 15-year-old was suddenly like any other child, sheepish and insecure.

But it was different during the demonstrations. Every Friday, and each year more and more, Ahed carried the responsibility for the continuity of the struggle on her shoulders. She didn’t do it alone, but together with her generation. In my first visits to the village she would stand in the back with friends like Nour, encouraging the boys who came back from the front lines soaked with “skunk-water”. But she became braver and braver. She took an example from women such as her mother Nariman or her relatives Boshra, Manal or Nawal Tamimi. I saw her in the front lines of the demonstrations more frequently, fearless, waving the Palestinian flag. Several times she positioned herself in the sights of snipers who were aiming at the protesters. Obviously Bassem was a role model for her as well: during Ahed’s childhood, her father spent almost as much time in jail as at home. After his last release from prison, their home was full of comrades and journalists.

“First, remove the occupation from your head”. This is a popular saying in the village. For years I thought it referred to us, the Jewish-Israeli guests: that we should renounce the occupation and commit ourselves to practical solidarity in order to be accepted as allies in the village. But as I watched the video in which Ahed strikes two fully armed soldiers in her front yard, for the first time I understood the flip side of this slogan: Ahed, just as Bassem and many others before them, removed the occupation from her own head. With her blow– as well as all her other acts of resistance – she accomplished that which scares Zionism the most: she de-colonized her own mind. She couldn’t remove the real occupation from her home, so she removed the fear of it from her head. In that moment, as her hand flew in the direction of the helmeted officer’s face, Ahed was briefly free.

And that’s precisely what made the Israeli media and society at large livid. Zionism is used to regarding Palestinians either as primitives (the host of a popular Israeli talk show couldn’t believe that Bassem isn’t a farmer, but rather a civil servant with a master’s degree in economics), or as “Islamic terrorists”. The fact that a young Palestinian woman fights back against armed soldiers invading her home, even wearing “western clothes” and her hair loose while doing it, was too much for Zionism to bear. Ahed was taken away from her home at 4am, trailed by a military camera team. The footage was sent to all Israeli TV channels and opened the evening news – as if it was an exclusive video from the raid on Osama Bin-Laden. Zionist masculinity had been literally slapped in the face and demanded revenge.

Now Ahed has been in prison since December 19, still without charge, together with her mother and her cousin Nour. According to reports she has been harassed by multiple unnecessary moves between different prisons and deprived of sleep. In her last court hearing she seemed tired and beat. She was also denied fresh clothes from home. Bassem told the media she refuses to speak to her interrogators, since she does not recognize their authority over her as an occupying force.

And so, Ahed has become a symbol. The scholar and journalist Rima Najjar declared her a “part of the Palestinian Generations R” –“R” for return, for the new generation unwilling to end its struggle until it achieves its land, its self-determination and its freedom. This is also something one heard quite often in Nabi Saleh as well. When I asked Bassem what he would do if the confiscated spring and plots of land were given back to the village, he replied he would naturally go to the next village and join their protests.

Solidarity is an important issue in Nabi Saleh. Bassem himself is a vocal supporter of a democratic one-state solution in the country. But for him and the others, this is not just about their own fate, but also about the rights of the Palestinian refugees. The image of the key, the symbol of the refugees’ struggle, can be seen waving on flags at the demonstrations. In the same way, slogans in solidarity with prisoners or with the population of Gaza or Jerusalem are common as well.

Ahed’s case is not unique. Her fate is not more important because she wears her blond hair loose. Nevertheless, it still is important, since it exemplifies a concrete aspect of the occupation of Palestine and allows us to improve our understanding of the more abstract, more general reality. And so, the reason I write about Ahed is not because I had the privilege to meet her and her family in person, but rather so that you, dear readers, cannot claim you had no idea.