A Class Divided: A 5th Grade Classroom in a Red State

A teacher shares her experience in the classroom the day after Trump was elected. All K-12 and university teachers are invited to share their experiences with Left Voice in a paragraph or more. Email contact@leftvoice.org. 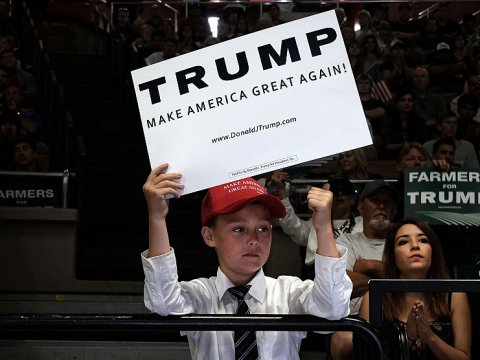 As a teacher in a red state, I headed to school on Wednesday dreading how I’d talk to my students. While my stomach still held a hard knot of panic and despair from the night before, I knew many students’ families would be celebrating. At ten, fifth graders’ opinions are overwhelmingly their parents’, but they are fervently and often fantastically supported. I didn’t even want to look at anyone who voted for Trump. How would I smile and get through the day when they were my own kids, the students I was supposed to nurture and love?

I’d been teaching the election to my 29 fifth graders for weeks, but I’d tried to stick more to the bare bone of electoral process than the issues, personalities, or stakes unique to this election cycle. My students were very divided. They supported Trump, Clinton, and third party candidates almost equally. Throughout the process, they had more negative things to say than positive. Like the adults around them, they were highly opinionated, often ill informed, and sometimes unkind.

During my drive to work the day after the election, I actually considered not addressing the results at all. Impossible, of course. Irresponsible. I got to school and read some articles with advice on talking to kids—family members and teacher colleagues had thoughtfully shared a few. I decided to direct my words most of all at students who were frightened for themselves or their loved ones. Many of my students are from immigrant families. Many are of color. Many are girls. I would tell them that they were safe, that we would work to protect them, that just because the future president had said some terrible things did not mean those things were okay to say. I reminded them that the people who voted for Trump (their friends, their neighbors, their parents) did so for lots of reasons. It didn’t mean they believed those hateful things. Some students also shared their feelings and their fears. My most vocal Trump supported sat in the back huffing and rolling her eyes. A house divided.

I said things to my fifth graders (and I did say them, even after the principal came over the intercom letting students know we would NOT be discussing the election results at school) that were not radical. Some of the things I said are things that chafe when other people left of center say them to me. My calculations had dozens of factors, and I still wonder if I did things the right way. It was a simplistic message for a complicated time and place: we’re in this together. Let’s move forward. Let’s move on.

When the inauguration comes in January, we’ll have to talk about things again. I am working hard to move my students to a place where they will all respect each others’ opinions, share bravely, and listen thoughtfully. On a national level, “let’s come together” drives me crazy. Every fiber of me wants to fight. But in the classroom, unity and compassion are my main goals.

I don’t know how I can do this for the next four years.

All K-12 and university teachers are invited to share their experiences with Left Voice in a paragraph or more. Email contact@leftvoice.org or send us a facebook message with your story.