Cuba’s remarkably successful state-owned biotech sector is on the cusp of completing development of a novel vaccine for Covid-19 that it will use to immunize its own population. But its plans to produce nearly 10 times what’s needed for that, and Cuba’s long history of medical internationalism, is a promising sign for those whom capitalist vaccination programs are leaving behind. 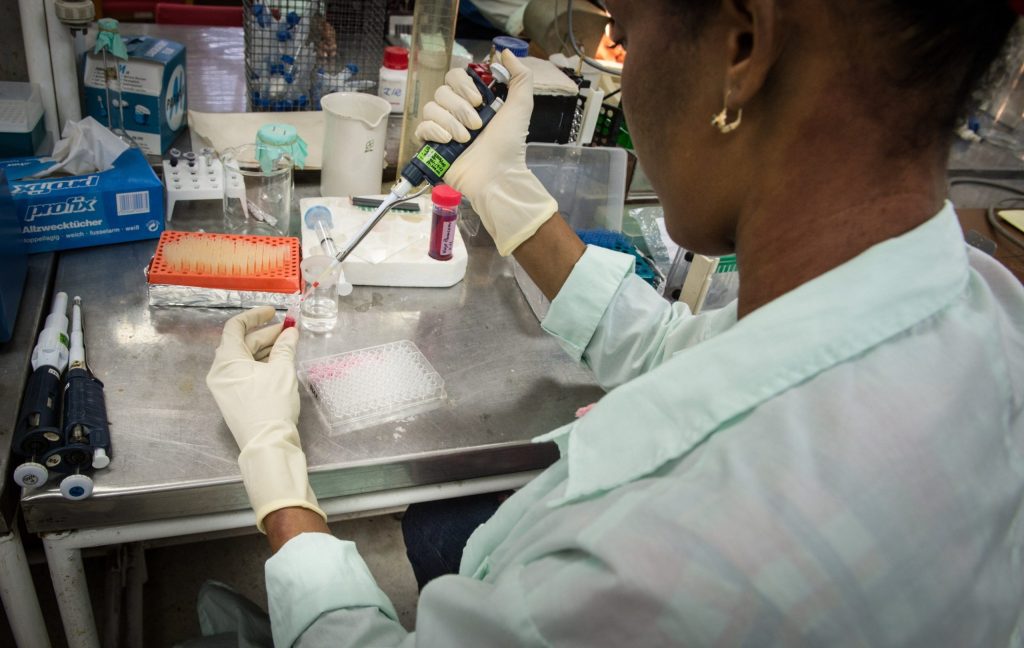 The news from Havana that Cuban medical researchers have been working on a domestically produced Covid-19 vaccine and are close to the human testing phase is not only great news for the island’s residents. Based on Cuba’s long history of providing long-term and emergency medical care for large swaths of the world’s most vulnerable poor populations, it has the potential to alter the trajectory of vaccinations across the globe.

The Economist reported on January 27, “More than 85 poor countries will not have widespread access to coronavirus vaccines before 2023.

Freed from the Profit Motive

Cuba’s Soberana 2 (Spanish for sovereign) is a conjugate vaccine that fuses an antigen to a carrier molecule, a method that bolsters a vaccine’s stability and effectiveness. If it works, it will be yet another feather in the cap for the Cuban biotech sector that over a 30-year period has become one of the most advanced in the world, especially in immunology. It is a highly sophisticated research and development ecosystem, entirely publicly funded and managed. It is a key part of one of the world’s most efficient public health care systems in the world, and its mission has always been to develop drugs that prevent disease and treat patients who are at the greatest need medically.

That is the opposite of U.S. “Big Pharma,” which functions to maximize revenues as it creates “blockbuster” drugs (those for which it projects sales in excess of $1 billion) that are often for maladies that are far less important than what the world’s masses confront as part of daily survival. A case in point is gastroesophageal reflux disease (GERD), which for more than 100 years was known as “heartburn” and was largely an unpleasant (but almost never life threatening or even particularly serious) but for which Nexium, Prilosec, and other drugs that are now available without prescriptions were created and filled the coffers of a handful of wealthy mega-corporations.

Despite a global pandemic, that profit-driven motive is impossible to overcome; capitalism is going to be capitalism. And so even the World Health Organization’s COVAX program to build manufacturing capabilities and buy supply “so that 2 billion doses can be fairly distributed by the end of 2021” depends largely on the world’s major imperialist countries to “share” some of their vaccine wealth.

The idea that global capitalism is going to come to the rescue of the world’s most vulnerable is, of course, a pipe dream. At best, there will be token support, like that proposed by French president Emmanuel Macron. He told the Financial Times that Europe and the United States should allocate up to 5 percent of their current vaccine supplies to developing countries — a proposal immediately rejected by the Biden administration.

That’s why a Cuban vaccine is likely very good news for the world’s most exploited countries. The Cuban objective is to produce about 100 million doses in 2021, and to immunize its entire population by the end of the year. But Cuba’s population is less than 11.4 million people. If history is any indication, the other doses are likely to end up in the arms of impoverished people around the world, especially Africa and Latin America.

To be sure, Cuba’s production capacity is insufficient to meet the 100-million-doses goal. While the United States has expressed zero interest, the island nation is working hard to team with contacts in Europe and Canada to expand production once the virus is ready. Then, Cuba’s unique approach to the “intellectual property” it generates through its biotech activity will kick in. While Cuba does patent the therapies it creates, it has typically sought mostly to recover its actual costs when selling its medicines — when it’s not providing them gratis to the most needy — and generally only charges near-market rates for patent licenses when the licensee is a wealthy capitalist company.

That is how the “business” side of Cuba’s medical internationalism has long worked. The other component has been its overseas medical missions, so broad in their sweep that the thought of Cuban Covid-19 vaccines not ending up as part of them is almost unimaginable.

In late 2019, the United Nations estimated that about 30,000 Cuban doctors were active in 67 countries, sometimes responding to disease outbreaks but just as likely to be working in longstanding clinics focused on illness prevention — just as health care is practiced in Cuba itself. Sending health workers around the globe began soon after the Cuban Revolution, and one academic study estimated that between the early 1960s and the mid-2000s, nearly 70,000 Cuban health workers had provided services in nearly 100 countries in Latin America, Africa, and Asia. During the same period, some 3,350 Cuban health workers every year worked abroad in two-year stints as part of the country’s “structural cooperation programs” helping establish health systems in 94 countries.

Some other examples include Cuba’s long-term care for 18,000 victims of the Chernobyl nuclear disaster in Ukraine, which it has been providing since 1990, helping treat everything from cancer to hair loss and skin disorders caused by exposure to radioactivity. And when the end of apartheid in South Africa led to “white flight” of so many of that country’s physicians, Cuba began a cooperative agreement in 1995 that has sent hundreds of doctors to that country while inviting medical students from South Africa to study in Cuba.

Whatever one sees as the limitations of Cuba’s 1959 revolution, there can be no denying that the country has built a health care system that puts most of the developed world to shame. There are no private hospitals or clinics — the government operates the national system. No one gets a bill for medical services. Medicines are free. When there is a charge for therapeutic drugs for visitors, it is so low as to be nearly unfathomable for people in the United States — as documentarian Michael Moore famously showed in his film “Sicko,” when he took 9/11 first responders from New York City to the island.

All of this is a testament to the power of a planned economy that puts human needs before profit. Even with the problems of the Cuban leadership, Cuba’s revolution that overthrew an oppressive capitalist regime that ruled in the service primarily of U.S. imperialism nearly eradicated illiteracy and infant mortality, established free, universal education, and began a long-term project to build one of the world’s most effective health care systems aimed at keeping people healthy, not bankrupting them if they are unfortunate enough to get sick.

For Cuba to fulfill this promise of its vaccine helping the impoverished of the world, it will have to overcome its own current desperate situation. Its Covid-19 statistics have been getting worse of late, with confirmed cases growing to more than 1,000 a day — far fewer than in the United States, but enough to put a big strain on the system.

This has been accompanied by growing economic strains beyond those put on the island every day by U.S. imperialism’s criminal blockade, the full version of which has been going on since 1962 — some 59 years. Cuba depends on tourism for much of its income, and the global pandemic has grinded that largely to a halt. The country’s economy contracted by 11 percent in 2020. People have been forced to line up every day outside supermarkets and other food shops just to get basic goods. These strains have compelled the Cuban government to take some emergency steps for which imperialism has long been clamoring, including allowing for some new self-employment.

Beyond those steps, there are the reforms that the ruling bureaucracy has been undertaking for many years now to increase the private sector overall and open the island to further foreign investment. The more that the world’s capitalists are invited to Cuba, and the more the Cuban government itself undoes its planned economy and adapts to “market forces,” the greater the threats to the country’s remarkable health care system. That would be a loss not only for the Cuban people, but for people the world over. The answer to Cuba’s problems lies in democratic decision making by its workers to protect and expand the gains of the 1959 revolution, along with expanded international solidarity and a global campaign to end the U.S. blockade.

Meanwhile, the Soberana 2 vaccine — which tens of thousands of Cubans will soon be getting as part of initial human testing — has urgency both in terms of health and economics. Cuba’s dedicated scientists are doing their best, and they don’t have any corporate bosses poking their heads into their labs reminding them of a fiduciary responsibility to produce fictitious capital for shareholders.