A Decisive Step in the Reactionary Right Wing Coup

The Brazilian Congress approved a legislative coup against President Dilma Rousseff, with speeches that proved just how right wing the impeachment process is. 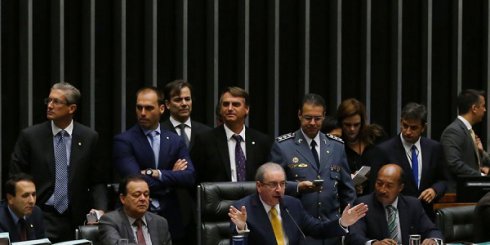 The Brazilian Congress has approved a legislative coup against President Dilma Rousseff. The process was presided over by none other than the infamous President of the Chamber of Deputies, Eduardo Cunha. Cunha is being investigated in numerous corruption scandals including the “lava jato” scandal which helped provoke the political crisis in Brazil. The following statement explains the perspective of the Revolutionary Workers Movement (MRT) in the face of these events.

With a much higher margin than expected by the Brazilian newspapers, the extraordinary session of the Chamber of Deputies approved the continuation of the impeachment process. Hundreds of pro-impeachment deputies, who bask in the privileges provided to politicians and who themselves are being investigated for corruption, imposed their own political will on the Brazilian people. Disregarding the will of the millions of voters in the previous election, these deputies voted to impeach the President in order to pave the way for deeper cuts and austerity measures than those the PT has been able to implement.

The Chamber of Deputies took another step towards an institutional coup which, with the support of FIESP (Sao Paulo´s Chamber of Commerce) and Globo News (a major right wing media network) will help bring Temer and Cunha to power. The next step of the impeachment process is to be approved by a simple majority in the Senate, which the media expects to easily pass. Operation Car Wash (Lava Jato, a federal corruption investigation), which serves imperialist interests and attacks basic democratic rights laid the foundations for this coup-like offensive by Parliament and the Judiciary.

Very few of the votes in favor of the impeachment actually referred to the official reason for the proceedings, Dilma’s “window dressing” of the federal budget – a dubious justification for impeachment. This makes clear the coup-like nature of the impeachment and demonstrates the completely reactionary basis for the Deputies’ votes. The pro-impeachment votes were a parade of right wing conservatism: impeachment in the name of the military police, of the armed forces, of the lobbyists of big agro-business that persecute indigenous people, of the church, of the patriarchal family and even in the name of the military dictatorship and its infamous torturer, General Brilhante Ustra.

The right wing did not emerge from nothing; they were the PT’s allies for more than a decade. The PT fed the right wing as part of their coalition government, a right wing which Sunday shamelessly paraded its reactionary nature. For example, central to the impeachment vote was the evangelical right wing that the PT chose to ally themselves to, an alliance in exchange for which the PT abandoned the struggle for basic democratic rights such as the right to an abortion. The impeachment was also supported by big agro-business, which the PT chose to work with and deny the people agrarian reform. The speeches of ex-allies of the PT (Marco Feliciano with the PSC and the PP’s Maluf) were more reactionary than those of the right wing opposition of the PT (even the hyper-neoliberal DEM)! The defeat of Dilma’s government, of Lula and the PT is a clear example that it is not possible to defeat the right by buying their votes with political favors.

The PT cleared the way for this offensive when they used capitalism’s corrupt methods to govern while containing and diverting the demands that exploded onto the streets in June of 2013. They implemented brutal cuts against workers and poor people in Dilma’s second term. The PT’s election campaign promised not to implement austerity, but it began by attacking the working class on the very first day of their government, undermining and demoralizing their own electoral base, especially the working class.

For their part the CUT CTB and UNE (labor and student organizations tied to the PT), and the PT leadership prevented the unions from fighting against the budget cuts. They defended the impunity of “their government”. They merely criticized the more right wing aspects of the government and worked on the foundations for a campaign by Lula in 2018. This is a real betrayal which the Brazilian people will have to pay for. In isolating and betraying workers struggles these sectors prepared Sunday’s defeat. In the middle of this national crisis, the peaceful protests called for by the unions tied to the government were unable to create any real resistance to the right wing offensive. The CUT refused to organize a plan to fight using strikes, work stoppages and other tools of class struggle organized by the rank and file- the only possible way to confront the right wing offensive. However, this would have meant breaking with their subordination to Lula and Dilma. These organizations would rather that the right wing win, as happened on Sunday, rather than risk a threat to the power of their bureaucratic caste. The union bureaucracy is more afraid of their members spontaneity than of the bosses and the right wing.

Sectors of the Brazilian left did not speak out against the impeachment- and went so far as to call on people to abstain. Some, like the PSTU, argued that the result was unimportant.*Therefore, in practice this sector cheered on FIESP, the Evangelical politicians and big agro-business – the major winners of the night. The approval of this step of the impeachment is an advance for the bonapartist (authoritarian) right wing. Internal currents of the PSOL, like the MES led by former Presidential candidate Luciana Genro, limited their action to a social media post against the impeachment in the last moments before the vote. By idealizing Sergio Moro, the judicial leader of the Lava Jato investigation, and supporting new general elections, they also helped pave the way for the triumph of this institutional coup.

We call on workers and youth who hate the right wing to organize a serious fight against the institutional coup, but without supporting the PT. Every workplace and school should organize an immediate plan to fight against the advance of the right wing and their attacks. CSP-Conlutas (a left wing trade union) should not be complicit in the coup by following the PSTU’s political line. If the Parliamentary leaders of PSOL wish for their rejection of putschism to be meaningful, they should cast away their illusions in Operation Lava Jato. They should not cover for the union bureaucracy or the PT’s politics. The PSOL should use their forces to call for an independent mobilization of workers and youth.

At the same time, we of the MRT dedicate all our efforts to building solidarity with the ongoing struggles and helping them to triumph. In Rio de Janiero there is a state public school teachers strike, 40+ schools are occupied by high school students and there is a student and teacher´s strike at UERJ, the state university. At all of the student and worker assemblies the MRT will work to create a plan to fight against the cuts and the institutional coup; we defend the need for a free and sovereign Constitutional Assembly, one brought forth by workers struggles that will attack corruption at the root and make the capitalists pay for the economic crisis.

Translator’s note:
*The PSTU’s position was to call for “Fora Todos” (out with everybody). In this poltiical moment, there was only one “fora” that exists- “Fora Dilma” (out with Dilma), by the hands of right wing politicians and judges with imperialist ties. The PSTU sees the “Fora Dilma” as a step towards “Fora Todos”. Therefore, the PSTU does not position themselves clearly against the impeachment, raising “Fora Dilma, Cunha e Temer”, nor does it plan to put its militant forces to organize a plan against the right wing impeachment. The PSTU’s “Fora Todos” serves as the left wing of the reactionary agenda to unseat Dilma.