A Fighting Program For a Free Palestine

Revolutionaries in the United States have a responsibility to build a fighting anti-imperialist movement in support of Palestinian liberation from the Zionist colonial oppressor, Israel. This is a contribution to that project. 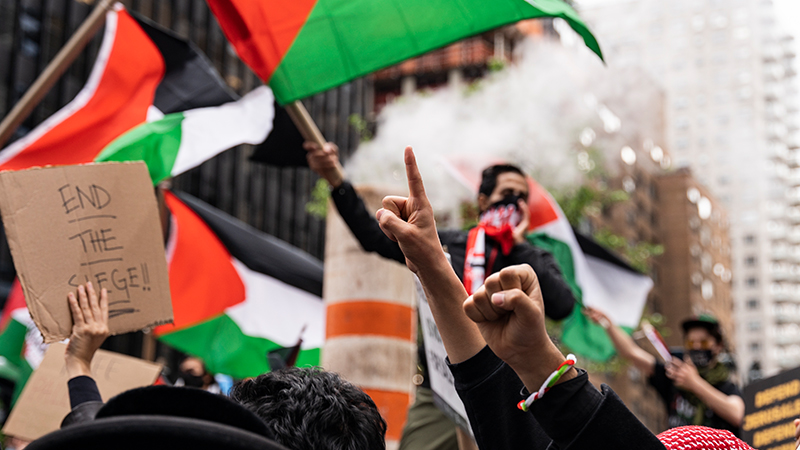 Earlier this year, members of Left Voice met over several hours for a deep discussion about Palestine. The meeting was motivated in large part by the phenomenal outpouring of support for the Palestinian people that was manifesting itself in the streets around the world, including in the United States. On the weekend of May 22 and 23, there were more than 90 rallies and marches across the country.

This outpouring was provoked by Israeli airstrikes against Gaza that began on May 10, and in which close to 300 people were killed. At the same time, Israeli settlers in the West Bank and Jerusalem unleashed a reign of terror, with mob violence that included several attempted lynchings of Palestinian passers-by.

We saw the global protests — and especially the protests in the United States — as a turning point. New polls showed American Jews, especially young people, breaking the stranglehold Zionism had long held over that broad community. Many people with “peacenik” views on Israel — typically supporting Israel’s “right to exist” but calling for a return to the “pre-1967” borders that had existed before the Six-Day War — began to question the Zionist project altogether. There was even a shift in mainstream media coverage of the Palestinian cause, with declines — small, but nonetheless noticeable — in presenting the Israeli position as mere “fact” and establishing moral equivalencies between Zionism’s murderous aggression and Palestinian defense.

Israel survives to oppress the Palestinians and continue its brutal expansion because the United States foots its bills, providing more military and other aid to the settler-colonial state than to any other foreign government in the world. In opening our meeting, Left Voice members agreed that as revolutionaries in the United States, one of our central tasks must be to contribute to the emergence of an anti-imperialist movement in solidarity with the Palestinian people.

The 11-point program we present here, which came out of that meeting and is a first contribution for the anti-imperialist movement that is required, is just as relevant as it was last spring. Israel continues its oppression, and the Palestinians continue to resist. The only difference today is that the story has faded from its position of prominence in the news media  — and that is something we ourselves must change.

A Fighting Program for a Free Palestine

1. The creation of Israel was backed by imperialism to be an enclave serving its interests in the region, specifically those of the United States. It has done so throughout its history. Because Israel is backed economically and militarily by the United States, our political profile from the United States must be uncompromisingly anti-imperialist.

2. The United States is the main source of support for Israel through military, economic aid and legal cover in all international institutions. This support is decades long and supported by the bipartisan regime. We propose to agitate with the slogan Stop All U.S. Aid to Israel!

4. We recognize the right to self-defense of the Palestinian people against the attacks of Israel, not only against the severe bombing of the Gaza strip but against all repression by the Israeli Defense Forces and other police and military agencies.

6. We defend the inherent right of return of all Palestinian refugees, from the river to the sea, as the Palestinians themselves define that right.

7. Palestinians are subjected to an apartheid regime by the racist and reactionary Israeli state, through military checkpoints, restrictions on freedom of movement and place of employment, and the isolation of the Palestinian population in territorial “islands,” often without access to water, electricity, and other basic needs. To further these efforts, Palestinian homes and orchards are routinely destroyed. We therefore demand the complete dismantling of Israeli apartheid.

8. The Covid-19 crisis is far from over in most of the world. Nowhere is that more evident than in Palestine, where Israel is withholding Covid-19 vaccines for Palestinians and consciously targeting vaccination posts in Palestine during the offensive as part of their ongoing ethnic cleansing of Palestinians from the region. This has aggravated the dire health crisis in the region. Since Israel continues to prevent Palestinians from obtaining basic healthcare, we demand: vaccines and healthcare for all Palestinians!

9. We demand an immediate end to the blockade of Gaza, without conditions. This blockade has long kept vital foods, medicines, and other supplies from reaching Gaza, and now — as Israel specifically targets not only Covid-19 testing sites, but also medical clinics and the roads to Gaza’s largest hospital, Shifa Hospital– the unconditional lifting of the blockade is as important as ever.

10. We unconditionally defend the BDS movement against retaliation, and will use the website and our positions in workplaces, unions, and schools against censorship and persecution of BDS activists by the U.S. state and corporations. Since the BDS movement plays a progressive role in the United States, as it positions itself in defense of the Palestininan people and puts forward actions that can weaken the state of Israel; because the youth and sectors of the labor movement use BDS to demand the union bureaucracies cut their ties to Israel; and because in many places it is the movement’s central demand, we support these progressive BDS initiatives by highlighting them on our pages and in unions and universities where we have forces. At the same time, we recognize that the BDS tactic is not our strategy; it shifts attention away from imperialist policies as a whole and focuses on consumer action and reforming this or that individual policy of the state, corporations, and schools. Consequently, we do not include it as part of our program. We will use discussion of BDS to push against its limits and foster a debate around the methods the U.S. working class can employ in the fight against Israel and Zionism.

11. The Zionist state of Israel, an ally of imperialism, is a racist enclave, based on colonization and national oppression, whose constitutive principle is the exclusionary Jewish character of the state. For this very reason, this state is completely incompatible with the Palestinian people’s right to national self-determination. Since the dismantling of the Israeli state is vital to fight the oppression, displacement, and systematic attacks on the Palestinian people, we defend a single, secular, democratic, and multi-ethnic state in all of the pre-partion territory of Palestine. However, this fight must be taken within the framework of class independence from all imperialist and regional bourgeoisies. Therefore, we believe that only a workers government — made up of Arabs, Jews, and all those who are against the colonial state — can guarantee that Palestinian and Jewish people live in peace, as they did for centuries before the imperialist offensive. We fight for a socialist Palestine and for a federation of socialist republics in the Middle East.