A Grim New Milestone: More than 10,000 Protesters Arrested Across the U.S.

The protests against police terror are being brutally repressed…by the police. 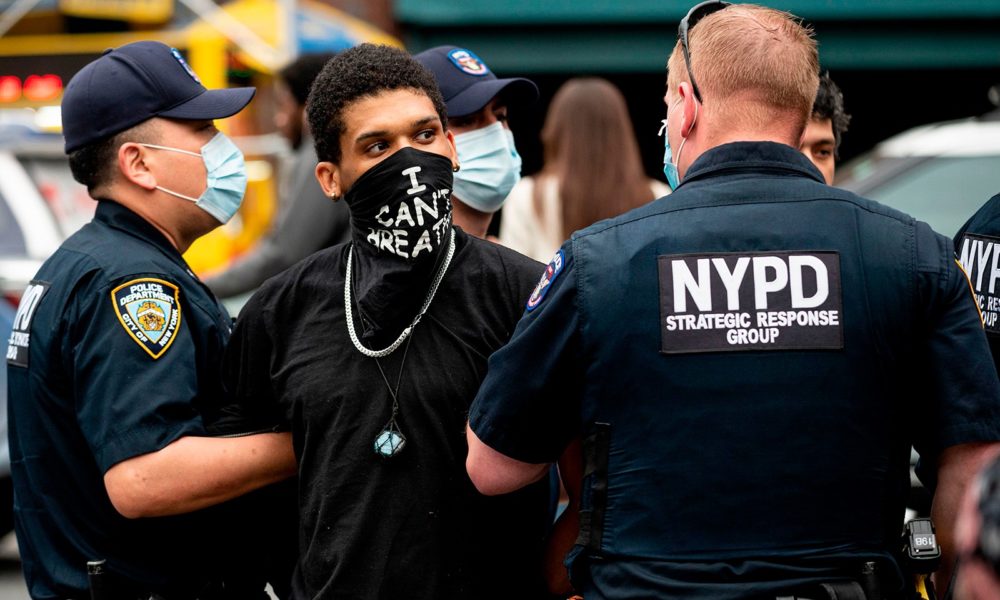 Last night the NYPD violently arrested hundreds of protesters in the Bronx borough of New York City just minutes after the 8pm curfew imposed by Mayor Bill de Blasio and NY Governor Andrew Cuomo. These protesters had been peacefully marching against police brutality for hours without incident, but as soon as the curfew took effect, they were corralled by the NYPD, arrested en masse, and taken to jails across the city. While some were released early the next morning, many are still in custody thanks to a huge backlog of cases waiting to be processed from the previous day’s arrests. Well over 300 people were arrested in just one night.

These protesters are being kept in cramped cells, where social distancing is impossible, and many are being punitively held sometimes for days before being processed. This means that many may likely leave detention with a death sentence simply for protesting. While most protesters have been charged with curfew violations, many are facing trumped up charges of disorderly conduct, resisting arrest, unlawful assembly, and assault on a police officer. The idea that these protesters, who have been brutally attacked by police would be charged with assault for defending themselves is outrageous, and shows the essential injustice of our so-called justice system.

This grim new milestone only further reveals the oppressive nature of the police and the state, neither of which has any interest beyond the perpetuation of capitalist exploitation under stable conditions of enforced consent. And it is imperative that working people everywhere reject these authoritarian tactics and demand the release of all political prisoners without charges. It is obvious that the curfews that have been imposed in New York and other cities are little more than a trap to draw out and punish the most militant layers of the movement, which every day becomes more and more radicalized. The NYPD and other police forces across the country believe the threat of violence and arrest will be enough to undermine and shut down these protests, but as we have seen everywhere this approach has been used, such tactics have only emboldened protesters and increased the number of people taking to the streets.

At the same time that they are cracking down on curfew violations, mayors across the country have been offering concessions as well. In Minneapolis, for instance, the City Council is considering measures to disband the police force, and in Los Angeles, Mayor Eric Garcetti has agreed to cutting the LAPD budget by more than $100 Million in response to the protests. This figure is of course, far too small considering the proposed LAPD budget for 2021 exceeds 1.5 Billion. And of course, it is the height of hypocrisy to pretend that such cuts are meant to curtail police violence and not merely balance the city budget in a moment of economic crisis and uncertainty. But these responses, which other city mayors and city councils have also embraced, show that the state is afraid and is willing to use the whole arsenal of carrots and sticks to quell unrest and eventually force the reopening of the economy. This shows that militant, disruptive protests can win demands.

While it is likely that repressive measures, including more massive arrests of peaceful protesters are likely to proliferate in the coming weeks and months, how the movement will respond remains to be seen. However it seems possible that the fallout of the coronavirus pandemic and the economic collapse will only add fire to these protests. Just this week, almost two million more Americans filed for unemployment, and millions have still not received benefits they applied for weeks ago. It is only a matter of time before the calls for racial justice in the streets grow to include calls for broader economic and social change including employment and the abolition of the police. Regardless, it seems clear that protesters, at least for the short term, have no intentions of backing down.

Would you like to contribute to Left Voice? Please send us your articles, photos, and videos. Also, if you are interested in translating from Spanish, Portuguese, French, German, Italian, or other languages, please get in touch. [email protected].org