A Historic Wave of Workers’ Struggle is Sweeping the U.S. — and It’s Speeding Up

It’s time for socialists to agitate as far and wide as we can for workplace committees and local assemblies. 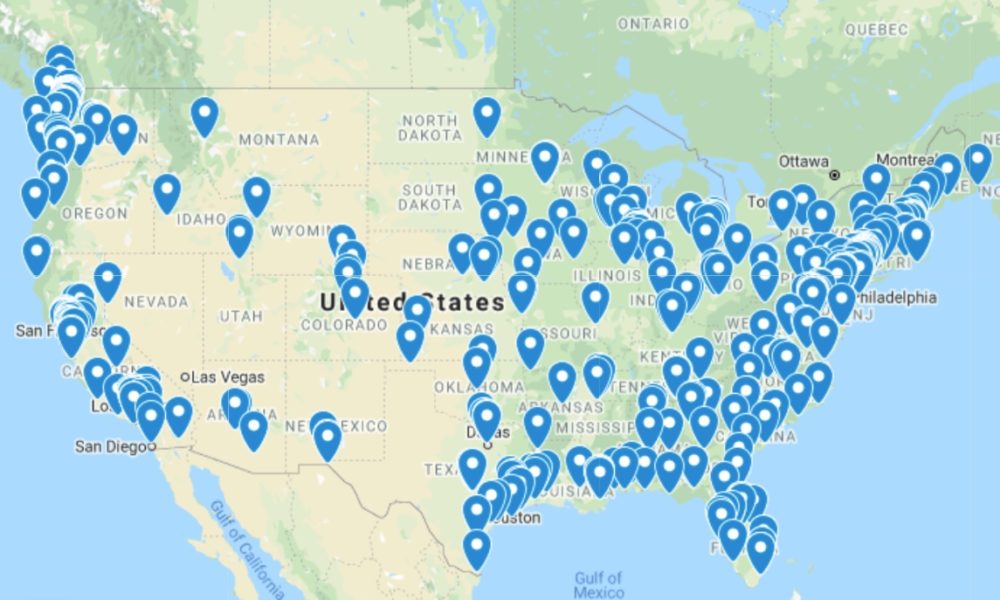 Strikes that have taken place during the Covid-19 pandemic (Source: Payday Report)

A wave of militant workers’ struggle is sweeping the U.S., with over 800 strikes, walkouts, sickouts, and other disruptions since the beginning of March. This wave is being driven by two things: support for the uprising against the police and fear from being forced to work amid the danger of infection and death.

In the past few weeks, socialists have said a lot about the role of unions in this struggle — and with good reason. Organized labor is playing a key role in the uprising against the police. Union bus drivers are refusing to transport arrested protesters in many cities, and on two separate occasions, union dock workers shut down ports across the country in mini-strikes to stand in solidarity with the fight against cops. All of this shows how important it is for socialists to work inside unions to push even more of them into the struggle against the police — for more solidarity strikes, for example, and to kick cops out of our unions.

But as important as unions are, they are only one part of a bigger picture. The great majority of strikes, walkouts, sickouts, and other disruptions since March are happening in non-union workplaces. This fact raises an important question: what can revolutionary socialists do to help build up and channel workers’ struggle beyond organized labor?

One key possibility is to agitate as widely and loudly as we can for the building of workplace committees by all those being forced back to their jobs in the pandemic, regardless of whether or not they’re unionized. Those committees could be weapons not just to fight for worker safety, but also to build up the organized workers’ power for sabotaging and striking more workplaces in order to deepen and broaden the class struggle and the uprising against the police.

But it’s just as important to agitate for citywide assemblies. Assemblies could be places where the uprising in the streets can build wider, stronger connections to the struggles of union members and militants as well as non-union workers happening across cities.

Unions in the Uprising

Unions are playing a key role in the current uprising. In its first days, a union bus driver in Minneapolis organized his coworkers to refuse helping cops bus arrested protesters to jail. The tactic quickly spread beyond Minneapolis to San Francisco, Pittsburgh, Washington DC, New York, Chicago, and beyond. Meanwhile, the international president of the Amalgamated Transport Union issued a statement supporting the tactic.

Bus drivers are hardly alone. Teachers in Minneapolis quickly joined the uprising against the cops. Within days the teachers’ union there (the Minneapolis Federation of Teachers) pushed the school district to cut its ties with the police. On June 9th, dockworkers across the country engaged in a mini-strike for 8 minutes and 46 seconds — the length of time that killer cop Derek Chauvin was kneeling on George Floyd’s neck. And on June 19th, dockworkers once again showed their solidarity when they shut down ports across the West Coast as part of a day of action.

Rank-and-file movements have been crucial in pushing unions to join the uprising. Union bureaucrats are usually reformist, if not downright reactionary. For example, the head of the AFL-CIO rejects the idea of kicking cops out. In other words, he’s defending exactly the same people who murder and terrorize Black and Brown communities and break strikes to protect the power of the ruling class. And the bureaucrats running the SEIU, AFT, and other unions are doing little besides giving mealymouthed statements. The SEIU, for example, issued a resolution supporting Black Lives Matter but conveniently didn’t mention its own affiliation with police unions. On Friday morning, the president of the SEIU gave an interview vaguely saying that kicking police out of unions could be “an option to be considered” while remaining silent on the issue of police abolition.

When bus drivers fought against helping cops transport protesters, it didn’t start with a union bureaucrat. It started with a rank-and-file driver who built a campaign from below that pushed the union to take more radical action. The Chicago Teachers Union, one of the more militant and activist-driven teacher unions in recent memory, is mobilizing to get cops out of schools, going far beyond the lukewarm “support” of the uprising coming from AFT national.  And likewise, United Teachers Los Angeles recently voted to call for the disbanding of the LA public school police department.

Seeing this power, many socialists rightly point out how important it is to struggle inside our unions to support the uprising. It’s crucial that socialists help build up the rank-and-file power we will need to create more wildcat actions in our workplaces, to push more unions into the streets for marches and demonstrations, and to force union leaders to take more committed and serious action, like kicking cops out of our organizations.

A Wave of Struggle Beyond Unions

Still, socialist strategy has to cope with the extremely small reach of unions. Nationally, only 10.3% of the workforce is unionized, the lowest number on record in the U.S. This breaks down to 33.6% in the public sector (but this includes the highly unionized cops themselves) and an abysmal 6.2% in the much bigger private sector.

In some of the main cities that the uprising is shaking, the numbers look a little better. For example, in the New York metropolitan area, union membership is 19.1% overall. In the public sector, the number is 63.3% (but again, this includes the cops). In the far larger private sector, the rate of membership is 11.8%. In the Minneapolis-St. Paul metro area, the numbers look similar. So in other words, in the New York metro area, around 7.2 million out of 8.8 million workers are not union members. In the Minneapolis-St.Paul metro area, that number is about 1.5 million out of 1.8 million workers.

And besides, the most exploited workers are only rarely unionized. Those kinds of workers tend to mobilize for struggle in waves during moments of mass struggle. We see exactly this dynamic playing out today, like in the historic mass strike actions by workers at Amazon, Instacart, McDonald’s, as well as by agricultural workers, since the pandemic hit the U.S.

In fact, Payday Report has so far tallied over 800 walkouts, strikes, and other workplace disruptions across the country, including a mass strike in Seattle, since only March 1.

This tally shows that there is a wave of militant workers’ struggle happening right now. And it shows that this wave is being spurred by two factors: safety concerns over COVID-19 and support for the uprising against the cops.

But also, the wave is accelerating. Between March 1 and the end of May, there were 260 reported workplace disruptions. That means more than 500, or the vast majority, occurred in the last three weeks, driven above all by support for the uprising against the police.  And the large majority of these disruptions are happening at non-union workplaces, organized especially by restaurant and retail workers, warehouse workers, agricultural laborers, meat packing factory workers, and truck drivers.

All of this means we are witnessing a situation where, very rapidly, large sections of the working class are being radicalized.  At the same time, these struggles also seem largely spontaneous. A few, like those by Amazon and Instacart workers, have created infrastructure to coordinate themselves.  But most are largely disconnected from each other and without a strategy to develop the wave of struggle as far as possible in coordination with the anti-police uprising.

As socialists, we badly need to strategize ways to help deepen and spread the surge of workers’ struggle that is happening beyond unions and to help connect them in the wider uprising.

One key possibility is agitating, wherever and whenever we can, for the creation of worker committees by the workers being forced back in the pandemic, regardless of whether or not there’s a union involved.

Bottom-up worker committees can build up the power to strike and sabotage a workplace, whether for safety measures in the pandemic or in support of the uprising.  And they can be a way of coordinating more of the working class to join the marches and fights in the street.

The fact that there is a wave of workers’ struggle and strikes right now means that versions of these committees are already forming all over the country. Amazonians United is one of the most important recent examples. It created committees within Amazon facilities and coordinated between them for a national strike. One major goal for socialists should be to point out the crucial importance of committees and to broadcast the need for them as far as we can in order to help the wave spread further.

But just as important is agitating wherever and whenever we can for the creation of mass assemblies like the ones emerging in Minneapolis and Seattle. Mass assemblies can be crucial for the meeting, connecting, and coordinating of protesters, union militants, and scattered non-union workers’ struggles.

In this way, local assemblies could be small-scale experiments in building a united front of workers and anti-racist organizations. They could serve as spaces for revolutionary socialists to argue that the fight for worker safety and the fight against cops must be parts of one struggle against a capitalist ruling class that wants to maintain its power and profit at any cost. And in those kinds of assemblies, socialists could help support and defend the most radical positions emerging in the uprising, like kicking cops out of unions, totally abolishing the police, and seizing workplaces under worker control.

In this way, mass assemblies would be crucial forums for socialists to counter the capitalist Democratic Party that is frantically trying to tame and channel the uprising — calling instead for the creation of our own, independent, revolutionary party that links the struggles of workers and the oppressed.