Tomorrow is Election Day in Germany. Here are some thoughts on how a leftist should approach the vote. 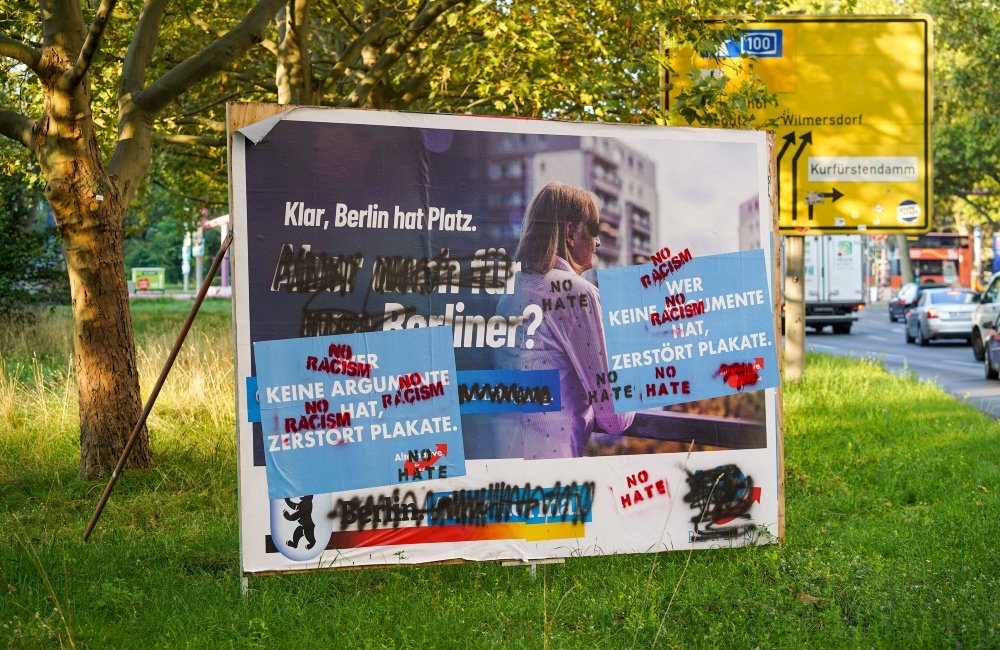 Apart from defacing posters from the AfD, German’s far-right political party, what's a “lefty” to do on election day? Photo: IMAGO / Stefan Zeitz

This Sunday, Berliners are voting in three different elections: the Bundestag (German parliament), the Abgeordnetenhaus (Berlin parliament) and the referendum about expropriating the city’s biggest landlords. What’s a lefty to do?

The very first thing: Demand voting rights for everyone! Every third person in Berlin is denied the right to vote, mostly because they lack German citizenship. People who have lived in Berlin for decades — who pay the same rents and taxes as citizens — are not allowed to participate. How can this be considered democracy?

The second thing: vote Ja on expropriation! This one is easy. Big housing companies jack up rents and suck money out of the city — Deutsche Wohnen, for example, takes €177 per month from each apartment to hand over to their shareholders. These 240,000 apartments need to be put under public control, so that money gets invested in maintenance and construction.

The elections, however, are more complicated. After 16 years, Angela Merkel is leaving the chancellery. The captain is leaving the ship. Who will follow? All the parties are competing to appear the most “Merkelist.” Every party can imagine entering a coalition with every other party, leaving us with a dizzying number of possible constellations with names like “traffic light” (red-yellow-green) and “Jamaica” (black-yellow-green).

The campaign posters in Berlin make it look like left-wing demands are incredibly popular. The SPD is calling for fair rents; the Greens promise to fight against racism; The Left wants social justice. So far, so good.

Except: All these parties of the “institutional Left” are in government, and have been for many years. How does their record match up to their posters?

The SPD, now demanding “fair rents”, is the same party that privatised up to 200,000 public housing units in Berlin in the 2000s. The social democrats gave us the hardcore racist Thilo Sarrazin as Finance Senator. Without his fire sale of public goods, rents would not have doubled in the last decade. Now, the SPD’s candidates are opposing the demand for socialization — even though even a majority of the party’s members are in favor. Sarrazin’s replacement Matthias Kollatz is instead buying back 14,800 of those apartments for almost €3 billion. In both cases, social democratic politicians stand for throwing public money at corporations that pay almost no taxes.

So what about the Greens? As the horrifying effects of climate change make themselves felt, at least one party is talking about the need to phase out lignite coal mining in less than 17 years. But as activists for Fridays for Future point out, Die Grünen are not actually a green party. Winfried Kretschman, the “green” prime minister of Baden-Württemberg, is a good friend of Germany’s automobile industry. The party wants E-Autos — which are terrible for the environment, but good for corporate profits. Meanwhile, Berlin’s “green” Transport Senator is trying to privatise the S-Bahn. This is not a program for stopping climate change — it’s a program for putting a green shine on capitalist devastation.

The last time the SPD and the Greens were in a national government, from 1998 to 2005, they launched the first German war of aggression since 1945. They also sent troops to Afghanistan — how did that turn out? Simultaneously, they pushed through the Hartz IV reforms, the biggest social cuts in the history of the Federal Republic. In fact, one could say that the red-green government was the worst government for working people in post-war Germany. Now those same parties are calling for a higher minimum wage and an end to child poverty. As the satirical paper Der Postillon put it, the Greens are lucky that “the majority of their voters are too young to remember their last stint in government.”

That leaves us with DIE LINKE, Germany’s Left Party. This party emerged out of East Germany’s old ruling party, and remains a kind of Schmuddelkind (grubby child) of German politics, with all the other parties emphasizsing they would never let them enter a national government. “The Left,” however, has been in government in Berlin for most of the last two decades, and in government in other East and West German Länder.

The party’s program sounds great: they oppose all German military interventions, call for open borders and even support the campaign to expropriate big landlords.

But their praxis? It’s often the exact opposite. Harald Wolf of DIE LINKE was Berlin’s Economics Senator in the 2000s, and he, alongside Sarrazin, was responsible for privatizing housing. Wolf also imposed precarious working conditions at hospitals and the public transport company BVG. Healthcare workers today are still fighting against the terrible devastation caused by this “left-wing” politician. It’s not just about this one guy, either. The Left Party is equally responsible for evicting a camp of people without housing in Lichtenberg to make room for luxury condos for investors and an expensive aquarium for tourists. Let’s not forget the violent eviction of the anarcha-feminist squat Liebig34 or the lefty bar Syndikat.

Rosa Luxemburg referred to parties like DIE LINKE as “government socialists”: they believe they can build socialism by joining the government of a capitalist state. They claim they can make capitalism more humane — and they end up administering an inhumane system.

I don’t think any of these “left-wing” parties deserve a vote. We need a Left that stands uncompromisingly on the side of working people, no matter their origin or nationality. That’s why I will spoil my ballot. Instead of a cross next to a candidate, I say, “voting rights for everyone” and “expropriate banks and corporations.” I would like to vote for a genuinely left party in Berlin, but such a party still needs to be built.