On Saturday, thousands of people joined a rally of the Workers Left Front—Unity (FIT-Unidad) in Buenos Aires. Three weeks before the national elections, they sent a powerful message to the two parties of the capitalists. 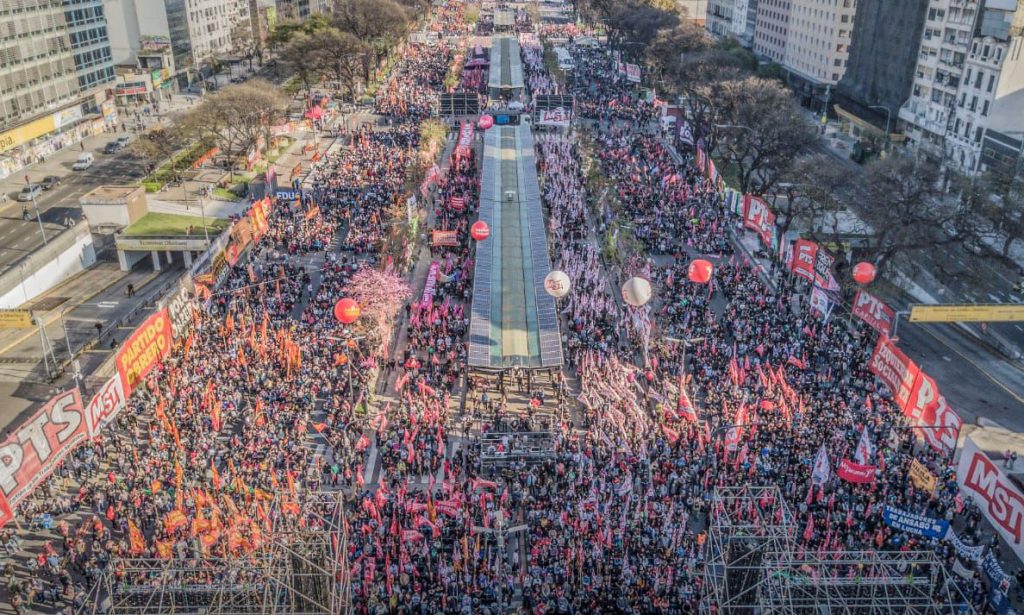 The largest avenue in the world, the 9 de Julio in the middle of Buenos Aires, was blocked off on Saturday afternoon. Thousands of socialists gathered in front of the Obelisk, Argentina’s national monument, for a rally of the Workers Left Front—Unity (Frente de Izquierda y los Trabajadores—Unididad, or FIT-Unidad). The country’s largest bourgeois newspaper, Clarín, estimated the crowd at 25,000 people. The rally was covered in all of the country’s major media outlets.

Argentina’s national elections will take place in three weeks. The current president, Mauricio Macri, suffered a landslide defeat in the primary elections on August 11. The center-left coalition of Alberto Fernández and former president Cristina Kirchner is preparing for a massive victory. Many working people, desperate for an end to the austerity measures imposed by Macri and the IMF, think that Kirchner’s return will help recover their declining living conditions. However, Fernández and Kirchner have promised to comply with the IMF’s dictates, agreeing to pay Argentina’s massive foreign debt of around $160 billion. As Myriam Bregman, a candidate for the congressional seat of Buenos Aires and a leader of the PTS (Party of Socialist Workers), explained during her speech at the rally: “Macri is leaving but austerity and the IMF are going to stay.”

Meanwhile, the bureaucracies of the trade unions and the social movements call on working people to wait for Fernández and Kirchner to win the elections before demanding change. But unlike the ruling class, the working class cannot afford to wait. In opposition to these stalling tactics, Bregman countered: “Women continue to die as a result of secret abortions. But they tell us we have to wait. We women always have to wait!” Kirchner and her late husband were in power for 12 years, and they blocked all attempts to legalize abortion. Now Kirchner’s center-left coalition includes numerous candidates who oppose the right to choose. The FIT-U is the only slate that defends abortion rights unconditionally.

In her speech, Bregman also referred to the striking teachers in the southern province of Chubut, most of them women, who are on strike to get unpaid wages. “They cannot wait,” Bregman said. Tellingly, in Chubut they are fighting against a governor who is part of Kirchner’s coalition—this shows what workers can expect from the new national government.

The rally lasted for two hours. Speakers came from the four organizations that make up the FIT-U but also from numerous rank-and-file opposition groups in the trade unions and workplaces, including the worker-occupied factory Madygraf. The rally was full of calls on the leaders of the trade unions to break their “social pact” with the incoming government and instead develop a plan of struggle to defend workers rights workers’ rights.

Romina del Plá of the Workers Party (PO), the FIT-U’s candidate for vice president, called on workers to “break from the bosses’ parties and give their votes for political independence.” This vote would help “prepare the struggles that are coming.”

Internationalism at the Center

Nicolás Del Caño, the FIT’s presidential candidate and a member of the PTS, explained that the country was in a situation of “polarization, where they are trying to convince people that there are only two options.” But this rally showed there is a third alternative. In contrast to the two bourgeois factions, who want the masses to pay for Argentina’s current economic crisis, the FIT-U demands that the capitalists—who created the crisis in the first place—be the ones to pay. To that end, Del Caño’s speech emphasized the importance of internationalism:

There is a historic tendency around the world toward a scandalous concentration of wealth in the hands of billionaires, while the vast majority get a smaller and smaller piece of the pie. In the poorest countries, this leads to constant waves of immigration. Thousands of people drown in the Mediterranean or they risk losing their children at the southern border of the U.S. But capitalism also impoverishes the U.S., French, English, and German workers. The youth are searching for alternatives on the left, but reactionary politicians try to channel the rage toward right-wing solutions.

Del Caño expressed solidarity with the struggles of the Yellow Vests in France and the mass mobilizations in Ecuador, along with the protests in Sudan, Algeria, and now in Haiti. “These are our allies! The working people of the countries oppressed by the IMF and imperialism!” He also connected these struggles to the hundreds of thousands of young people participating in Fridays For Future:

The youth is mobilizing around the world against the irrationality of capitalism, which is leading the world to an environmental crisis. The youth is saying: ‘Our lives and our planet are worth more than their profits!’ This is why our struggle is to the end, to get rid of exploitation and oppression, for a workers’ government and socialism.

He ended his speech with a rousing call: “Struggle and organization is the only realistic path to ensure that the majority does not have to pay for this crisis.” The rally ended with tens of thousands of voices on the central boulevard of Buenos Aires singing the Internationale.

There are three weeks left until the national elections. The militants of the FIT-U will continue their fierce campaign against the two bourgeois alternatives; but this campaign is really about preparing for the struggles to come, and envisioning a different “future for workers, women, and youth.”

Hundreds of socialists from around the world have signed a declaration in support of the FIT-U. How is this example relevant for socialists in the U.S.? As in Argentina, we in the U.S. are also confronted with a two-party system—and as in the U.S., different left groups in Argentina have adapted to the bourgeois center left, forming the left flank of a capitalist government coalition. But as the FIT-U shows, when the revolutionary socialist left remains independent and builds up its own fractions in the schools and workplaces, its uncompromising, explicitly anticapitalist and socialist politics can reach millions of people with a perspective for liberation from capitalism.

The FIT-U is not simply a new left phenomena like Syriza in Greece or Podemos in the Spanish State. The FIT-U is fighting for a workers’ government, built on the ruins of the bourgeois state. Given a relatively low level of class struggle in Argentina at the moment, this anti-capitalist program of struggle will not win a majority of the votes, but it will prepare the vanguard of the working class for the struggles to come.

This article was based on a report in Spanish on La Izquierda Diario. Pictures from Enfoque Rojo.