A Migrant Caravan Breaks Through Police Blockade in Mexico. Let Them All In

On Saturday, October 23, a migrant caravan left the city of Tapachula, in Mexico’s southern state of Chiapas. The caravan is made up of some 6,000 migrants, mainly from Central and South America, heading to Mexico City. Their goal is to first submit papers to be in Mexico legally, with the aim of continuing their […] 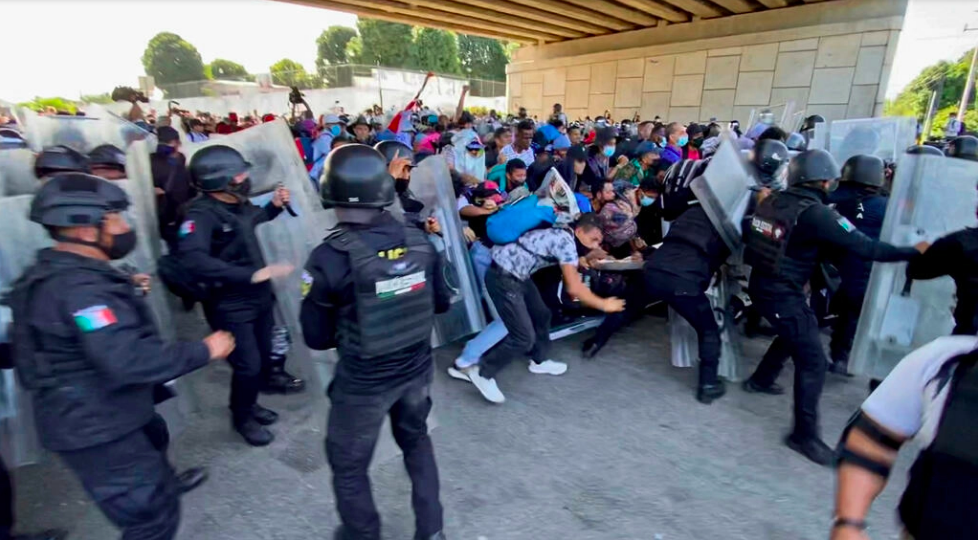 On Saturday, October 23, a migrant caravan left the city of Tapachula, in Mexico’s southern state of Chiapas. The caravan is made up of some 6,000 migrants, mainly from Central and South America, heading to Mexico City. Their goal is to first submit papers to be in Mexico legally, with the aim of continuing their journey to the United States.

As the caravan left Chiapas, the Mexican authorities responded by placing checkpoints on the roads with armed National Guard and state police dressed in riot gear.

The brave migrants formed human chains to face off against the police, allowing them to break through the police and advance toward the city. Thousands of migrants were able to push past the cops. They were beaten as they passed the police, and several women and children were badly injured.

Migrants travel by land or by sea with their children and sometimes while pregnant. They experience unsafe and uncomfortable transportation — from walking to riding the top of trains to riding in the back of dark vans. They often go hungry during the trip. And when they arrive in a town, they are forced to accept the most precarious jobs in conditions of even semi-slavery, without rights, and they are paid miserable wages while the courts decide whether they “deserve” asylum. Throughout their long march from Central America to the United States, the migrants have faced a great deal of police repression.

On the one hand, the U.S. relies on undocumented migrant labor to extract even larger amounts of surplus value from them, as they endure low wages and miserable working conditions. This occurs with the support of subordinate countries, such as those of Central America and Mexico, which supply the imperialist need for workers in maquilas, the countryside, and agriculture, as well as in personal and domestic services, to continue capitalist accumulation with temporary jobs, as was done with the Bracero Program (1942–64).

On the other hand, the U.S. maintains a virulently anti-immigrant discourse and policy against those who enter the country illegally, in order to maintain its status quo by imposing programs such as Remain in Mexico through the U.S. Supreme Court, which forces the applicants to wait on the other side of the border, that is, in Mexico.

Mexico under the “progressive” President Andrés Manuel López Obrador has created multiple border control mechanisms at the bidding of Donald Trump and Joe Biden. Mexico created a new military police and is attempting to deter migrants from getting to the U.S. border.

Let Them All In

In the face of the anti-immigration policies of the capitalist states, it is urgent that the broad spectrum of organizations and unions on both sides of the border boldly demand that migrants’ fundamental rights be respected and that violence against them be stopped.

Together with our comrades of La Izquierda Diario Mexico, we demand full rights for everyone who migrates and an immediate halt of the actions of harassment and aggression against migrants who were forced by the consequences of imperialism and natural disasters to leave their own country in search of a better life.