A month of mobilizations in Peru 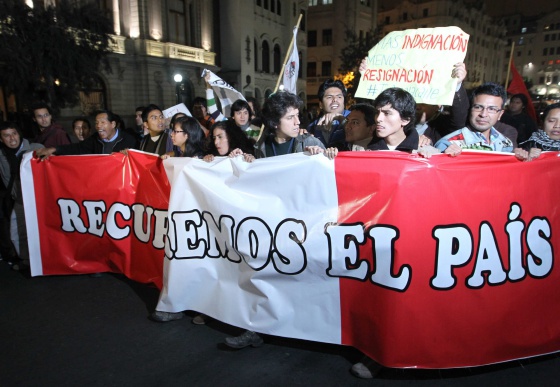 July was a month of intense social agitation in Peru, with several days of protests and mobilizations of public employees, health workers and university workers, that are resisting government measures, as well as the beginning of demonstrations of “indignant” young people against the corruption of the government and the politicians of the regime, against the background of an atmosphere of protests against mega-mining and among different groups of the poor. This process of increasing resistance is confronting a government that took office two years ago as a “progressive” replacement, and that is seeing its popularity crumble, experiencing a cabinet crisis and political scandals and scandals of corruption, while it attempts to go forward with a series of anti-worker and anti-popular measures. Peru could be undergoing incorporation into the phenomenon of a bursting-in of the workers’ movement and young people’s mobilizations that jumped during this same month in Brazil and the Southern Cone.

The protests are confronting a government that has embarked on a reactionary and pro-imperialist offensive, as a response to the economic difficulties that the unfavorable change in international conditions is creating.

Peru is coming from long years of very rapid growth, because of mining exports at high prices and foreign investments attracted by natural resources. But the prices of copper, silver, tin, and other metals are falling. And, with that, the rate of GDP growth, that was 7.9% in 2010, fell to 6.2% in 2012, and it would be something more than 5% this year. As Ollanta Humala admitted in his July 28 speech: “The prices and foreign demand are beginning to shrink, signs that the cycle that favored our economic growth is reaching its end…”

To respond to the demands from businessmen and investors, Ollanta has been increasing the severity of his economic policy, which entails a rise in the cost of living, protects the challenged mining companies from popular repudiation and promotes measures to “adjust” the state structures with counter-reforms like the law about teachers (imposed at the end of last year, despite strong resistance; opposed by teachers), the public service law, that has been resisted by government employees, the healthcare reform, against which doctors, nurses, and lab technicians from the hospital system (on strike for the last three weeks) are fighting, and reductions in university autonomy, against which, big student mobilizations have been carried out.

Among the sources of the broad popular discontent is the contrast between big corporate profits and the enrichment of the most well-to-do groups, and the situation of millions of people, in poverty or squarely in the greatest destitution, the workers with low wages, those who face job uncertainty, the mass of urban poor people, the peasants and indigenous peoples, a social situation that the social assistance plans are scarcely trying to alleviate.

At the same time, the flaws of the political regime, with scandals of corruption that affect the government, are surfacing. Meanwhile, the agreements with traditional politicians, the scandals of corruption that are affecting the ruling party, like the arrest of the former Deputy from the party in power and an advisor to ministers, Nancy Obregón, for narco-traffiicking, and affecting her allies, like former President Toledo, whose mother-in-law faces charges of embezzlement; maneuvers attempting to free Fujimori or the spurious agreements like “the share-out,” the agreement with opposition groups in the Parliament to hand out appointments in the Central Bank, the Constitutional Tribunal, and the Office of the Ombudsman.

In the second round of the 2011 elections, Humala won, by presenting himself as an “outsider,” that had nothing to do with the discredited traditional politicians, with a nationalist, anti-corruption profile, and by promising a “great transformation.” The majority of the forces of the reformist left and the union bureaucracy backed him, endorsing the dubious “progressive” credentials of this former soldier, who made a career during the times of the “dirty war” against the Shining Path guerrilla group.

Ollanta kept the pillars of the neoliberal “model” imposed under Fujimori and preserved by Toledo (currently an ally of the governing party) and Alan García (now in opposition) from the Aprista Party. This model was based on handing over minerals and oil to foreign capital, profitable earnings for businessmen, and low wages and uncertainty for the workers, contempt for the regions, poverty for the peasants and oppression for the indigenous peoples, keeping the agreement with the US on the Free Trade Treaty and the military facilities. The plans for “inclusion” and social assistance are poor palliatives for the situation of millions.

Most recently, he intensified his repressive and pro-imperialist turn to the right, by aligning himself with the US. He not only put Peru in the “Trans-Pacific Partnership,” next to agents of US policy, like the regimes of Mexico, Costa Rica, Colombia and Chile, but Ollanta traveled to Washington to discuss the rapprochement with Obama, and he is discussing with Colombia “security” plans and the “fight against narco-trafficking,” with US collaboration.

The mobilizations of July

It began with the National Day of Struggle, July 4, called by the CGTP and other organizations, with thousands of public employees, students and other groups in the streets, despite police repression, that left one person dead and several wounded on the outskirts of Lima, and dozens of people arrested nationally.

The university students are coming from big mobilizations and seizures of university buildings, against the attempt to reduce autonomy. The public employees, rejecting the “Public Service Law,” that involves layoffs and prohibits collective bargaining over wages, have been carrying out strikes, seizures of public buildings in cities of the interior and demonstrations in Lima and nationally. Some 20,000 physicians, nurses and lab technicians from the healthcare system have been on strike for three weeks, against the proposed reform of the hospital system. Several workers’ conflicts have also occurred in mines, like Uchucchacua/ Buenaventura, Milpo or Casapalca, in some industries and in the service sector.

These struggles are occurring in the context of a nearly constant process of popular protests against the giant mining companies, for regional demands, and others. According to the Office of the Ombudsman, in the month of July, there were 229 conflicts, more than half because of “social-environmental” reasons, with many of these in Cajamarca, Ayacucho, Ancash and the Departments of the south, where the resistance is growing against the pillage involved in mining, that affects many towns and indigenous communities.

On July 17 and 22, demonstrations were begun by the “indignant ones,” that on July 27 joined the mobilizations of public-sector employees, called by the unions. On July 28, the day of Peruvian independence and a public holiday, new demonstrations brought together several thousand people, and there were new clashes with the police. The CGTP announced that it would call a general strike in August.

In the recent mobilizations, public-sector employees and university students have come together in the streets, but, in addition, there has begun what the press is calling “the waking up of the indignant ones” (La República, July 31): the emergence of a movement inspired by the young people’s protests internationally, like the Spanish “indignant ones,” the “#Soy132” movement in Mexico, or the massive going out to the streets in Brazil, that includes groups of middle-class young people, denouncing corruption and the “sharing out” of jobs in the upper echelons of the government and the parliament. This has achieved a lot of visibility in the media, since it showed that discontent with “politics” extends to middle-class groups. Thus, on July 17, 22 and 27, through the “tomalacalle” hashtag and other channels of the social networks, calls circulated that brought together some thousands of young people, among whose guiding lights are student leaders from universities like the Catholic University (PUCP), groups of artists and NGOs (like the Coordinating Committee for Human Rights), but where tendencies of the left and of the bourgeois opposition, like the APRA, are also trying to have influence. That is, it is about an ideologically and politically heterogeneous phenomenon, that is at its beginnings, but that is tending to differentiate itself. Thus, while one group considers its objectives achieved with the suppression of the “share out” and suggests that, beginning now, it is a matter of “regulating” what the government and parliament will do, another group is proposing continuing to participate in the mobilizations, next to the unions and the CGTP.

The government has noticed the danger on the “social front” and is trying to maneuver in some of the most irritating initiatives, in order to prevent a bigger convergence of workers, groups of the poor, students and middle-class young people in the streets. Members of the ruling party and of the opposition have cancelled the “sharing out” of positions. Parliamentary spokesmen have come out to suggest a “dialogue” with the students, to agree on the university reform, and that it would not be resolved this year, and they have also hinted that the implementation of the legislation for public employees would be postponed. However, Ollanta is not renouncing his plan, and he continues his campaign against the doctors and nurses on strike. A big test of strength nationally is being posed, and it remains to be seen if the weakened Ollanta, despite the backing of the big bourgeoisie and imperialism, can confront and defeat the workers’ and popular resistance.

The mobilization of the workers in struggle, converging with young people and students, and relying on the broad popular dissatisfaction, and the trail of protests of peasants, of indigenous peoples, in defense of the water, against contamination by the giant mining companies, etc., would be able to develop towards a big national mobilization and deliver big blows against Ollanta and his measures.

But the policy of the most important leaderships is a serious obstacle on this road. The upper echelon of the CGTP, alongside the Frente Amplio, centered on the Peruvian CP, the Socialist Party, MAS, TyD, CxC, and other reformist groups, not long ago, even supported the government, and, although they found themselves forced to move away from it, they do not cease to bet on achieving negotiation with Ollanta. For that reason, they do not have a policy of unifying and developing the mobilization, that they conceive of as an element of pressure to force the government to negotiate and make concessions. At the same time, they are raising a center-left program of “alternative policies that will strengthen development without exception, that will really respond to the necessities of the national and international situation, affirming human rights and those of the workers, care for the environment and the cultural heritage.”

Mario Huamán, main leader of the CGTP, stated that in August the preparation of a national strike will be discussed. We will have to see if it is really promoted and with what date. The atmosphere of protests seems to encourage the possibility, and necessity, of a unified national measure, but not just isolated actions, so a plan of struggle would be required, that will start coordinating the mobilized groups, that will raise a workers’ and popular program, not subordinated to negotiation with Ollanta, nor other bosses’ politicians, and will aim at defeating the government and its plans in the service of the big bourgeoisie and the transnational corporations. In the heat of these struggles, the possibility is posed that the Peruvian workers’ movement will begin to repair its forces and prepare itself to open a road to a workers’, peasants’, and popular solution.