Venezuela: A new case of corruption shakes the government 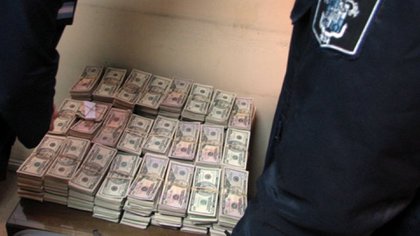 They say that a few hours before leaving, the pilots were informed
that there would be eight passengers on the Royal Class flight coming
from Venezuela. The affair of the suitcase of the Venezuelan Antonini
Wilson has acquired a special resonance. Not only because it is in
addition to the Skanska case and to the bag of former Minister Miceli,
stripping bare the corruption of government officials, but because of
the importance that the Bush administration and the domestic right
wing attribute to diplomatic relations between Argentina and
Venezuela. The case has already forced the resignation of the
Argentinean official Claudio Uberti, responsible for deals with
Venezuela and an official of the road franchises control organization
(OCCOVI), as well as [the resignation] of the Venezuelan Diego
Uzcategui Matheus, Vice President of PDVSA, the state oil company of Venezuela. In the first place, the political fraud of Kirchner’s
[current President of Argentina] leadership, that was presented as the
“new politics,” is being unmasked. Just as with Menem [President of
Argentina 1989-1999], the shady deals of privatizations and financial
speculation are the rule; shady deals tied to state investment, with
their respective bribes for political personnel and to the commissions
connected with foreign investment are the characteristic of Kirchner.
These “commission member” politicians go on getting richer, at the
same time that they are collecting for their election campaigns.
Claudio Uberti, a man of Minister De Vido [Julio De Vido, Argentina’s
Minister of Public Works] and a genuine penguin, had in 2006 sent 63%
of the funds from OCCOVI to 4 businesses operating in Santa Cruz and
was a collector of funds for Kirchner’s election campaign in 2003,
charged with selling fishing licenses in exchange for $60,000 US to
finance that campaign.

In the case of the suitcase, the face of the Venezuelan bourgeoisie,
or of its links with foreign capital, also appears. Antonini Wilson, a
millionaire businessman, of dual nationality (Venezuelan and US),
residing in Miami, does business with the “national” oil company
PDDVSA. Not only that, but as was published in several media sources,
Antonini Wilson appears in a picture with Johny Yánez1, the chavista
governor of Cojedes state, with whom he had visited Montevideo last year.

A regime of easily bribed officials

The critics of official bribery all participated in the same corrupt
regime of all these years. López Murphy [Argentinean politician, who ran for Presidency in 2003, finishing third, now an ally of Macri] was a government minister of Banelco, excuse me, of the Alianza. Lavagna
[former Minister of Economy and Production. 2002-2005] was a member of
this government that keeps the privatizations made by Menem, perhaps
the biggest scandal involving corruption and handing over the national
wealth in our history. And as if these scandals were a small matter,
even the corrupt Macri [Buenos Aires politician, elected as head of
city government in BA and an opponent of Kirchner] came out to talk
about honesty. Elisa Carrió2 supported the government of de la Rúa,
then resigned, and her “model” was the US, where bribes and corruption
are legal tender. If sectors of the business class complain about
corruption now, it is because bribery seems very expensive to them.

Corruption is the rule in capitalist business, and the inheritance of
all countries, from Argentina to the US, Europe and Japan. The
scandals of this kind are legal tender.

For that reason, there is no other way to end corruption than ending
capitalism, by building a workers’ republic to put an end to the big
looting of the national wealth, that is being squandered from minute
to minute, in favor of enriching a handful of imperialist firms, the
local bourgeoisie, and a caste of corrupt officials. To end this order
of things, it is necessary to nationalize the oil companies, the
energy firms, the telephone companies, to name just a few, without
compensation, under administration by the workers, the only class that
has no part in corruption. In the same way, in order to avoid deals
involving speculation, the banks must be nationalized, to prevent the
flight of foreign currency and make credit serve the interests of
workers and the people.

“What is robbing a bank, compared to founding one?”

This famous sentence from Bertolt Brecht seems appropriate for the
bosses’ opposition that raises its voice from all the media, trying to
set itself up as the “moral reserve of the fatherland.” The radical
Gerardo Morales, Lavagna’s running mate, questions the case of the
suitcase, because it did not go through the usual financial channels,
the banks. But the bankers are the ones who have just made a
corralito,3 in Paris, as they did in 2001 in Argentina, swindlers
par excellence. Speculation, usury, and evasion are their doctrine.
Shady business deals involving speculation seem to them to be the
normal field of business, as if they had nothing to do with Menem’s
handing over [of Argentina’s national wealth], with the foreign currency flight during the de La Rúa administration, with the foreign debt. Even the (pro-Castro) banker Heller, who confiscated the savings of depositors, like all the other bankers did, now appears in the ranks of the government, posing as a progressive without blushing. The speculators take away billions of dollars through the “legal channels” of capitalism, money they earned by taking advantage of our high rate of interest, in international terms, thanks to official policy. Without going further, the right-wing “anti-chavista” opposition does not criticize Chávez for participating in financial speculation, by buying Argentinean bonds with the highest market interest rate, in order then to part with them, benefiting his banker friends.