The resistance movement sparked by President Macri’s pension reform continues through new workers’ struggles against layoffs. The Left and Workers’ Front calls for the coordination of all popular struggles and for a plan for a general strike. 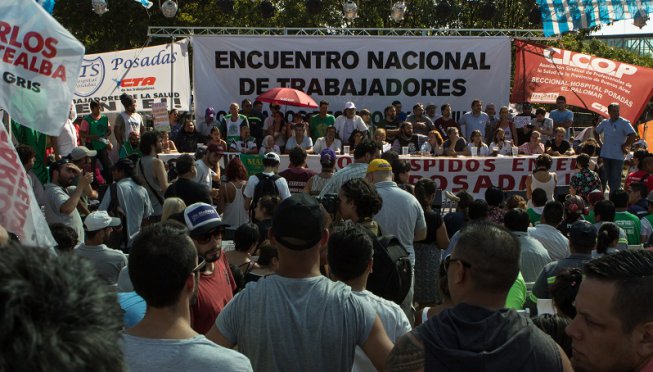 In the recent midterm elections in Argentina, the right-wing Cambiemos party of President Mauricio Macri was able to secure the largest share of votes. As a result, the elections were widely interpreted as political support for his austerity program. However, his government saw a rapid dwindling in popular support when it passed a major pension reform, which was met by a major resistance movement this past December. Although President Macri succeeded in passing the pension reform, the government paid a high price for its offensive and had to retreat from its initial plan to pass a labor reform law as well.

During the summer months, when there’s generally very little political activity in Argentina, the government continued to lay off workers in the public sector, and unemployment rose in the private sector as well. This summer though, in almost every industry, workers fought back with strikes, roadblocks, and marches, in stark contrast to the previous year in which the majority of the layoffs were carried out without a fight back from workers. Some of the most important struggles this summer (winter in the Northern Hemisphere) include the miners’ strike of Rio Turbio and the strike by workers of the Posadas Hospital. These actions point to a growing political unrest among the working class

Because the government wasn’t able to push through a labor reform in Argentina, as the Temer government did in Brazil, it is looking for an alternative plan to exit from the economic crisis with a different set of attacks on the working class. For one, Macri’s government is targeting the collective bargaining agreement of the truck drivers’ union, one of the strongest unions in the country and one which, unlike several other large unions, stills stands in the opposition to the government. The leadership of truck drivers’ union called for a mobilization on February 21 in protest of this attack and rejecting new layoffs. However, this demonstration has not yet been backed by a call for a general strike by the CGT (one of the principal union confederations), which would constitute a major action against the austerity measures and could be the start of a serious plan for struggle.

In a calculated effort to strengthen their position, Macri and his government are prosecuting the leaders of the truck drivers’ union with a campaign against corruption. This is completely hypocritical because even though the union bureaucracy is well known for their anti-democratic processes and their dark dealings, Macri is not interested at all in transparency but rather in disciplining the opposition and in undermining the power of the unions. In light of this situation, the mobilization, although called upon a set of legitimate demands, also becomes a show of strength for the union’s leadership in fighting the corruption indictments.

Meanwhile, the union bureaucracy, which didn’t lift a finger to fight the pension reform, now has to deal with a double pressure: that coming from the government and the unrest of the rank-and-file workers in the face of the austerity plan. The result is a tension that is threatening to break up the leadership of the CGT, which represents the truck drivers’ union and other large unions.

The Partido de los Trabajadores Socialistas (PTS, Socialist Workers’ Party) and the Movimiento de Agrupaciones Clasistas (MAC, Movement of Class Struggle Organizations), along with other sectors of workers put forward a proposal for a major labor meeting on February 17 to coordinate all the workers’ struggles across Argentina and to combat the divisions among workers created by the union bureaucracies.. This call was debated and voted on in assemblies throughout the country and the meeting was held in the Posadas Hospital, where workers are currently resisting widespread layoffs. Around 2,000 workers representing the most important battles throughout the country, from La Esperanza sugarcane fields in Jujuy, in the north of the country, to the Rio Turbio miners in the south, got together to discuss how to stop the government’s austerity plan and vote on a course of action.

The most important resolutions of the meeting were:

– Organize an independent contingent for the February 21 march demanding the reincorporation of all laid off workers, and for the union leadership to call for a general strike. The workers also demanded that the representatives of the struggle are included as speakers at the rally

– Support the encampment that the Rio Turbio miners are planning to set up outside Congress.

-Promote the International Women’s Strike on March 8 and to demand the unions to call to an active strike on the day.

The FIT (Left and Workers’ Front) coalition of which the PTS is part, made a statement calling on the Left, youth, and workers to join in the march on February 21 with an independent column that reflects this program.