Let’s Shut Down the Economy to Fight for Abortion Rights

Abortion is becoming illegal again. The best way to fight against these restrictive laws is mass mobilizations and strikes—not sex strikes, but strikes that grind the entire capitalist system to a halt. 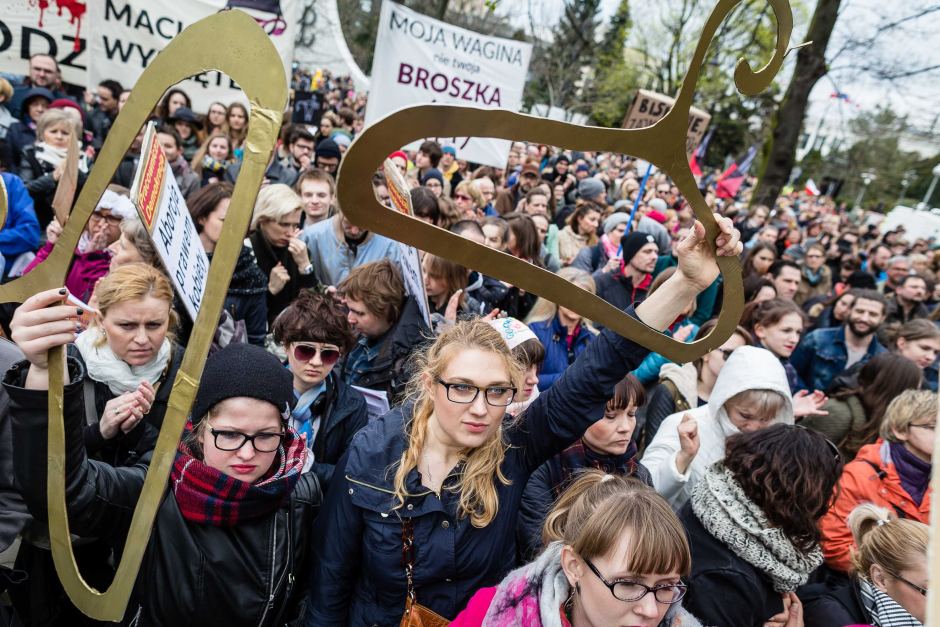 In recent weeks, several states have passed incredibly restrictive laws against abortion. The specifics of these laws vary, but the end result is the same: abortion is becoming illegal again. In many cases, these laws threaten anyone who gets or performs an abortion with prison time.

The Alabama bill (HB 314) reclassifies performing an abortion at any stage of the pregnancy as a Class A felony, meaning that doctors will face a minimum of 10 years and up to 99 years in prison. The law states that people who seek or attain abortions will not face criminal or civil liability. There are exceptions for “serious health risk to the unborn child’s mother,” ectopic pregnancies, and pregnancies in which the fetus has a “lethal anomaly.” However, there are no exceptions for situations involving rape, incest, or pregnancy of a minor.

The Georgia bill (HB481) is similar but does include exceptions for rape and incest. In contrast to the Alabama bill, the Georgia bill lacks a provision exempting the person seeking the abortion from prosecution. Currently, being found guilty of breaking abortion law in Georgia results in between 1 and 10 years of prison time. However, the language of the bill leaves room for prosecutors/judges to redefine abortion as homicide, meaning that pregnant people and their doctors could both be charged under criminal codes pertaining to murder and manslaughter.

The Missouri state senate also passed a bill (HB126) early Thursday morning that bans abortions after eight weeks, without any exceptions for cases of rape and incest. The bill does include provisions for when the person seeking an abortion is a minor, but these provisions primarily take the form of making obtaining an abortion more difficult, not less.

The Alabama and Georgia bills also include disturbing provisions regarding the mental health of the pregnant person. The bills state that a “medical emergency” or “serious risk to ⁹ unless the woman is examined by two different psychiatrists who decide “that the woman has a diagnosed serious mental illness” that may lead to harm to her or the fetus. These mental health provisions present several different problems regarding the risks they pose to people and the legal precedents they may set. For one, they dismiss mental illnesses and other emotional conditions as categorically less serious than physical conditions. Another issue with these provisions is that they make access to abortion contingent upon formal diagnosis, which can be difficult to obtain, and makes access also dependent on vague notions of what counts as “serious” mental illness.

Nothing to do with being “pro-life”

Laws that ban abortions do not stop abortions; they just sentence women and trans people to death by unsafe and illegal abortions.

This law has nothing to do with being “pro-life.” What about the lives of the women who will be forced to carry pregnancies to term or have unsafe and illegal abortions? What about the 16 million children in the U.S. who go hungry every year? What about the children separated from their parents in detention centers? “Pro-life” is not about defending life. It is about state control of bodies.

These bills are part of a larger pattern of assault on reproductive rights nationally, and it would be a mistake to view them as just a southern phenomenon, or as an issue that only affects a few states. These laws, like the “heartbeat bills” that passed earlier this year in Ohio and Mississippi, will be challenged and go to the Supreme Court. And that means we are looking at the possibility of mass restrictions on abortion rights nationally and the possibility of an entire or partial overturn of Roe v. Wade. In such a scenario, 9 unelected judges would have the power to make decisions about the bodies of the approximately 168 million women and trans* people around the country.

Unfortunately, the liberal response to these assaults on reproductive rights so far has been less than inspiring. Planned Parenthood is buying ads that encourage women to contact their legislators. The typical electoral line of “just vote for the Democrats in November” is being trotted out again—but it is even more obviously useless than usual as people are feeling the consequences of these repressive laws right now! Indeed, it is very difficult to imagine that, if more “progressive” politicians are elected in 2020, those who are imprisoned under this law will be pardoned. And for those who are forced to give birth there will never be any justice for what the state forced them to go through. We don’t need abstract, far-off political solutions; we need a concrete and immediate solution.

Besides, voting for the Democrats is no guarantee that they will support reproductive rights. After all, Nancy Pelosi called abortion a “fading issue” in an interview in May of 2017 and argued that Democrats could be flexible on reproductive rights. Even Bernie Sanders campaigned for a pro-life Democrat. The DCCC is fundraising for a pro-life Democrat as we speak. So, it’s hard to imagine that this party will serve as a shield from the avalanche of attacks.

Another bizarre and patently useless “solution” that was proposed by Alyssa Milano is for all women to go on a “sex strike” and refuse to sleep with their (presumably cis male) partners until these laws are overturned. This solution deeply misunderstands both strikes and sex: sex with one’s partner shouldn’t be a job to go on strike from, but an expression of desire. This call for abstinence completely erases women’s desire and goes back to the puritanical and misogynistic notion that sex is only for men’s pleasure. To add to that, abortion bans don’t just affect women, not all women have sex with cis men, and most cis men have absolutely no control or say over laws about abortion. A sex strike will only leave us sexually frustrated, repressed, and with less reproductive rights, as this doesn’t attack any of the institutions of power that are attacking our reproductive rights.

Some have argued that the solution is to donate to local non-profits or form a network of people willing to host people who seek abortions in states where it is still legal. While we should encourage these efforts to support those seeking abortions, this is a vastly insufficient response. They are strategies of defeat, accepting as a given that these laws will stand and that we must work around them. Instead, we need to organize to defeat anti-abortion legislation. This approach also doesn’t take into account that these laws will go to the Supreme Court, and we will need a national response. The Supreme Court decision may threaten reproductive rights everywhere. We need to begin to build this national response now.

If we hope to effectively stop what amounts to a full frontal assault on reproductive rights, we have to take urgent action now.

Maybe half of Alyssa Milano’s slogan is right. We do need a strike but not one that withholds sex. What we need is a strike that withholds our labor, one that could hit the capitalists and the politicians where it hurts: in their wallets.

If Our Lives Don’t Matter, Try Producing Without Us

Early in 2019, during the height of the government shutdown, the Democratic and Republican parties were locked in a blame-game in order to “win” the government shutdown. Meanwhile, federal workers were going hungry, being evicted from their homes, and bearing all of the financial hardships. The bourgeois politicians continued to go on television and talk about how deeply they understood the pain of the working class but continued to do nothing. It wasn’t until the working class threatened to strike—shutting down several airports—that the shutdown was actually ended.

In the cases of both the government shutdown and the current assault on reproductive freedom, the Democratic Party put up entirely symbolic resistance in hopes of garnering votes. The fact that bourgeois politicians aren’t proposing any radical solutions shouldn’t be a surprise. The ruling class is scared of our collective power because, when the working class organizes together, we can win. When we organize, we can stop these regressive laws and protect those of us who need abortion access. We have the power to stop the attacks on reproductive rights, like we had the power to stop the shutdown.

There have been several examples of powerful women’s mobilizations for women’s rights around the country in recent years. Moreover, there have been the International Women’s Day strikes around the world, most notably the massive strikes in Spain that shut down entire industries, involving 5.3 million people and were called for by ten labor unions, as well as by student assemblies and women’s assemblies. “If our lives don’t matter, try producing without us,” the Spanish women’s movement proclaimed.

Just as the threat of a strike ended the government shutdown, a strike could defend our reproductive rights. Professions dominated by women have been increasingly mobilized in the U.S., with the wave of teacher strikes at the forefront, but also strikes and threats of strikes by nurses. These sectors that are already in motion, and that will experience the consequences of our rights being taken away, can and should push for strikes, calling on all sectors of the working class to join. This defensive struggle against repressive laws, in the hands of the working class, could and should be the springboard for a broader movement for Medicare for All that includes free abortion on demand.

There are more socialists and people open to socialist ideas than ever in the past 30 years in this country. Some even hold leadership positions in labor unions, as several DSA members do. These positions should be at the service of mobilizing the working class against this repressive legislation and for the right to free abortions on demand. As socialists, we have to fight against this legislation, organizing our co-workers and, if we are unionized, our unions.

These attacks on vulnerable members of the working class will continue. Abortion rights will continue to be under attack, and women and trans* people will continue to be the target of right-wing aggression. The only way to resist this is to build a strong and unified class solidarity among the working class—not just for wage demands but also for reproductive rights and the rights of all oppressed people. Organizing for a strike means organizing to build a stronger working class, one that will not only overthrow these oppressive abortion laws but this entire oppressive system one day.