Venezuela: A reform cooked up behind the backs of the people

On August 15, Hugo Chávez presented his announced constitutional reform in the National Assembly after months of secrecy. A reform worked out behind the backs of the people, which was presented as a package where 33 articles were amended, in order then to call on the workers and the people to vote “yes” or “no” without having participated in the writing or discussion [of the reform]. 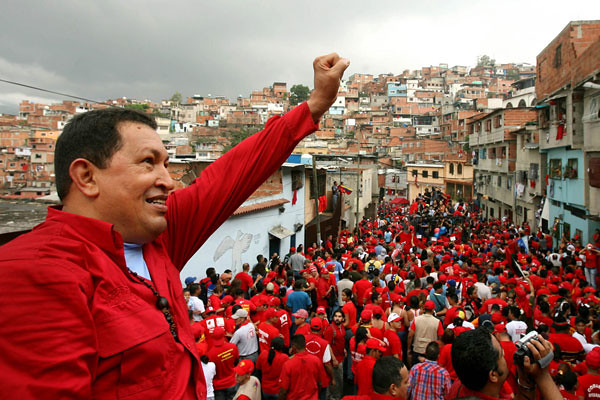 Toward a more Bonapartist regime

It is important to emphasize that the constitutional reform has as one
of its priorities, increasing the concentration of power in the figure
of Chávez. If Venezuela has a system of government centered on the
President, with the present reform it will reach a greater degree of
Bonapartism. In the reform, not only is the presidential term
extended from 6 to 7 years, but it is defined that immediate
reelection continues for as many times as [the President] wishes to
submit to an election. Let us recall that Chávez is already in his
second Presidential term, because when his authority was reaffirmed,
another year was added to his first term as President. The system of
plebiscites accentuates the Bonapartist characteristics of a whole
system of government.

In the case of the “Bolivarian armed forces,” according to the reform,
Chávez takes the authority to promote officers in all ranks. He
demands “supreme authority in the chain of command in all its
entities, components and units.” Notice that Chávez does not need
prior approval from the National Assembly for all his titles. In this
way, all military-administrative power is concentrated in the figure
of the President, and everything for any promotion depends on Chávez’
approval. He talks about a “popular militia,” but this is only a
change of name for the traditional national reserve, which is directly
under Chávez’ command.

In the reform, Chávez also gives himself the authority to create
federal provinces, federal territories, and/or federal cities, some of
them with the pompous title of “communes,” without any intervention by
the National Assembly; Chávez will be able to create more Vice
Presidents by his direct intervention; they will act with direct
powers without any popular election, in those new territories. This is
what Chávez calls the “new geometry of power.” Notice that the
Venezuelan Vice President is not elected through universal vote now,
and neither will the new Vice Presidents be elected; they will
[however] act with complete authority and be responsible only to the
President. Let us emphasize that Chávez is authorized to rule by
decree for one more year; this authority can be renewed. With so many
powers in the person of the President, many people will wonder, why
have a National Assembly? With the reform, the President will have a
free hand under a more and more Bonapartist regime and will be able to
regiment his policies without being answerable even to the National
Assembly.

And, as if it were a small matter, the President assumes control of
the entire public treasury; the central bank and all the [currency]
reserves will now be controlled by the President, as well as the
already controlled economic stabilization fund, in addition to the
complete control Chávez has now over PDVSA.

“People’s power,” only in words

To conceal the new concentration of powers, Chávez talks about the
“people’s power,” raised to constitutional rank, of the communal
councils, etc. But this is just a rip-off, since the already
controlled communal councils will be directly dependent, politically
and economically, on the President. If there were any autonomy in any
communal council, they will lose all power on being co-opted and
directly led by the state. We have already seen how the government has
tried to restrain the unions by limiting their independence by all
means, with the aim of tying the hands of the workers’ movement. Now
it is trying to create “work councils” within the factories, spreading
the tentacles of the state through these councils, as well as in all
the popular neighborhood organizations. Certainly, reducing the
workday to 36 hours weekly is an inducement, but it is far from
becoming a reality in a country where the informal economy approaches
50% of the economically active population, and even in the formal
sector, the rate of precarious work [of uncertain employment] reaches
elevated levels.

There is nothing new [in the reform] regarding property: [the reform]
simply continues the defense of private property. The government that
talks a lot about “socialism” and about the evils of capitalism, is
not making the least change regarding private capital and the means of
production. Proposals in this field do not go beyond empty rhetoric,
born of the wish to dazzle the unwary, like a broad spectrum of the
Latin American left, by detailing, in a pedantic manner, the different
forms of property that now exist. Article 115 continues to guarantee
private property in all its types, and fundamentally, private
ownership of the means of production. As many analysts, including
those of the right, say, “the proposed economic reforms are a lot of
noise and small potatoes.”

What is Chávez seeking with the constitutional reform?

Overcoming the crisis of the regime of control, that began in February
1989, requires bold efforts by the government to repair its order,
after the process of struggles that has taken place in Venezuela.
Tension in sectors of the bourgeoisie tied to big capital — sectors
partially defeated in 2002 and 2003, thanks to the action led by the
large groups of the people and the working class — has been eased, and now a realignment is being prepared to make way for the political
project of the national government. From that comes the need for a
constitutional reform, from the top of the bourgeois regime, that
could facilitate the formation of a social bloc with the business
class which has now become “nationalist” and “patriotic,” that,
together with the political caste that is currently administering the
state, would play the major role (“que … lleven la voz cantante” ).

But exactly the groups of the majority that tipped the scales in their
favor, and indirectly, in favor of the government, have no voice in
deciding what changes are needed and who should lead them. Discussing
the reform is not aimed at this [eliciting the workers’ opinions]. We
categorically deny that giving “special powers” to the President with
a hint of the so-called “parliamentarism of the street” can represent
an advance in solving the fundamental demands of the workers and the
people. As we have explained from the Juventud de Izquierda
Revolucionaria, beyond the attempts to present the reform as a
“deepening” of any revolution, this [discussion] does not put the
demands of all the exploited and oppressed people up front; on the
contrary, it means the legal advance of a policy that seeks to keep
the workers from having their own politics independent of the state
and its “socialism with businessmen.”

For a free and sovereign Constituent Assembly

The Venezuelan and Latin American left literally believes the inflamed
speeches of Chávez that “question” capitalism and that propose a 21st
century socialism,” and that with the reform they would be deepening a
“revolution,” that their own heads have invented. Nothing is further
from the truth. An increase in the concentration of powers, through a
reform behind the backs of the people, that continues the 1999
Constitution guaranteeing private property, is underway. What Chávez
says about “parliamentarism of the street” and “power for the people,”
hides a project aimed at a more Bonapartist regime, of plebiscites. A
lot of “power for the people,” but he is not even willing to submit
the fundamental problems of the country to debate by the workers,
campesinos, poor people and the original peoples. Chávez talks about
“power that can constitute,” but he cannot bring himself to open a
real “constituting process,” that is, to call a real free and
sovereign Constituent Assembly. So we see that the “explosion of
communal power” is only empty talk, since in reality everything is
concentrated in the hands of Chávez, and those who surround him, and
not in the Venezuelans who are exploited and poor, who are the ones
who produce everything.

For this reason, we think that, in view of this project, it is
necessary to impose a real, sovereign and free Constituent Assembly. A
single Assembly that will combine legislative and executive power,
that is, all the existing “powers” should be dissolved in a single
Assembly. Its members must be chosen through universal suffrage by all
those over 16, without discrimination of sex or nationality, and
taking the country as a single district. The candidates for the
Assembly should be put forward by local assemblies near to the needs
of the people; they must be recallable to put an end to deputies that
swindle their voters, and earn the same as a school teacher or an
average worker, to put an end to millionaire politicians. An Assembly
with full, sovereign power freely to debate and solve the problems and
demands of the workers and the people, to guarantee that the oppressed
masses impose their strength and decide the measures needed to solve
the fundamental problems of the oppressed nation.