A Revolutionary Socialist Running for City Council in Appalachia

Ellie Hamrick is running for City Council in Athens, Ohio. More and more socialists in the U.S. are running for elected office—but Hamrick is one of just a few candidates with a revolutionary perspective. Left Voice spoke to her about the reception her campaign is getting. 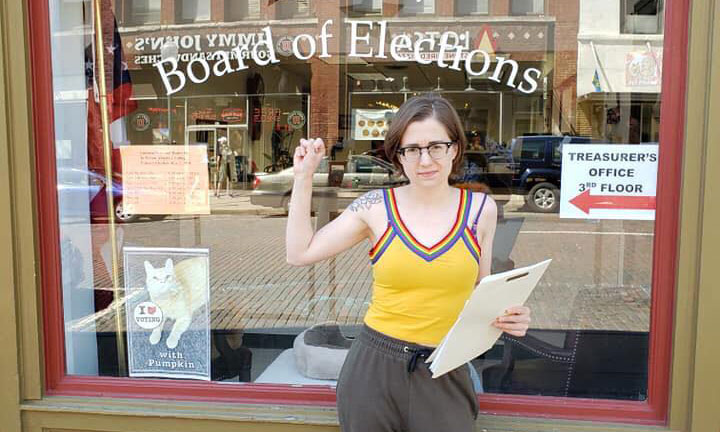 Can you tell us something about yourself and about your hometown? I had never heard of Athens, Ohio.

I grew up in Columbus, Ohio, and I first moved to Athens to attend Ohio University in 2009. I’ve been an activist since I was 11 years old. I’ve done work on reproductive rights, anti-policing, anti-prison, environmental justice, Palestine, strike solidarity, and much more. I studied anthropology and I wrote about the genocide reparations movement in Namibia and the mass incarceration of women in Appalachia. I have a beagle named Charles, and I work as a waitress and dishwasher. I’m a proud member of the Athens Revolutionary Socialists.

Athens is a college town nestled the Appalachian foothills. Unlike the entire surrounding area, Athens consistently and overwhelmingly votes Democrat in local, state, and national elections. So there’s this pervasive myth that Athens is a liberal oasis. But Athens County is the poorest and most unequal county in Ohio. Slumlords, top university officials, and the “enlightened” liberal political class of small business owners and property owners prosper while most of us struggle to make ends meet. Women and people of color make about half what men and white people make, and a third of children live below the poverty line. Skyrocketing rents and stagnant wages are pushing more and more workers outside the city entirely.

There are more and more democratic socialists running for office. Often they use this term as a synonym for “New Deal liberalism.” You mightbe the only revolutionary socialist candidate out there at the moment. What does “revolutionary” mean to you as a candidate?

I know I’m not the only one, because another member of the Athens Revolutionary Socialists, McCray Powell, is running for City Council in neighboring Nelsonville, Ohio.

I am a revolutionary because I know that the planet literally cannot sustain one more decade of capitalism. I also think there are connections among social democracy in colonizing countries, imperialism, and borders. Unequivocal solidarity with all workers of the world is both morally and strategically imperative. We have to turn the whole world upside down: we can’t get the scope and scale of change that we desperately need via elections or reforms.

That doesn’t mean I’m against elections or reforms—there’s a dialectical relationship there. I’m running for office and proposing a number of local reforms. But everything must be done with an eye toward the central goal of building independent working-class power, organization, consciousness, solidarity, and militancy. I openly and frequently make the case for actual, literal revolution as I’m campaigning. My organization and I are not devoting all our attention to our electoral campaign, either—we are also involved in workplace organizing, harm reduction for drug addiction, and mutual aid efforts that we ask people to plug into as we meet them in the course of campaigning.

Appalachia is one of the centers of the opioid crisis in the U.S. What does an anticapitalist program against addiction look like?

Opioids and meth are big issues here. The evidence is abundantly clear that policing and prisons do exactly nothing to solve the problem, and in some ways they make it worse. Ending poverty is the most effective way to get at the root of this crisis of despair. That’s why I want to take away as many resources as possible from policing and expensive city-center infrastructure projects, and give those resources to anti-poverty programs. For example, kids should have access to three free, healthy meals a day all year round. We can also bring free mobile health clinics to our town, including for things like dentistry and reproductive healthcare. And we can forgive all municipal water debt and restore services to people without running water.

Fundamentally, socialists should recognize that people who use drugs are human beings—and that far from being a blight on our community or the source of our problems, they have a lot to contribute to building effective solutions to reduce the harm that often comes with drug use and abuse. There are already great advocacy and support organizations in our community led by current and former drug users. As we work toward confronting the root causes of addiction, we need harm reduction strategies like clean needle exchanges, free Narcan distribution and trainings, and a safe injection facility.

Your most interesting demand is for the abolition of the police. This is something that Marxists have always called for. But many socialists in recent years have forgotten about this. Even many working people critical of the police might find this a bit shocking. Can you explain the proposal?

I’ve said that I want to take as much money and power and as many weapons away from the police as possible at every opportunity, up to the point of abolishing them completely. A lot of people are surprised by this, but it is possible to convince them because sound evidence is on the side of police abolition. Let’s assume that we take for granted that crime causes social harm—a bold assumption in a world where dropping bombs is legal and smoking weed is not. Sociologists estimate that we could literally do away with policing and prisons entirely, with no alternative in place, and the impact on the crime rate would be somewhere between negative one and positive two percent. There is no correlation between police per capita and the crime rate. Police simply do not keep us safer. In fact, they make life a whole lot less safe for people of color, queer people, poor people, women, and people with disabilities—the majority of society. Police kill many times more people than mass shooters. It is completely outrageous that Athens spends a third of it budget on policing while so many children are hungry. Athens has passed dozens of ordinances about policing, and every single one gives the police more money and/or more power. That’s going to have to change.

What kind of reactions have you been getting for your campaign? Do you think you can draw any lessons from it for revolutionary socialists in the U.S. more generally?

I’ve been surprised to find that most people I talk to don’t really have an opinion on socialism vs. capitalism one way or another. In some ways that feels a little underwhelming, but it’s also given us plenty of opportunities to introduce people to socialism—especially since there is also an independent democratic socialist, Damon Krane, running for mayor of Athens. At first I was hesitant about being “too radical”—but I’ve found that actually a lot of people have a sense that radical change is necessary given the magnitude of the crises we are facing. There’s no point in going halfway. We have to show people that we have a genuine alternative to the status quo and a vision of how to get there. I’ve been very open and honest about what I think, including the need for revolution, and people have been responding well. I keep waiting for the other shoe to drop, but so far the campaign’s just on the up and up.