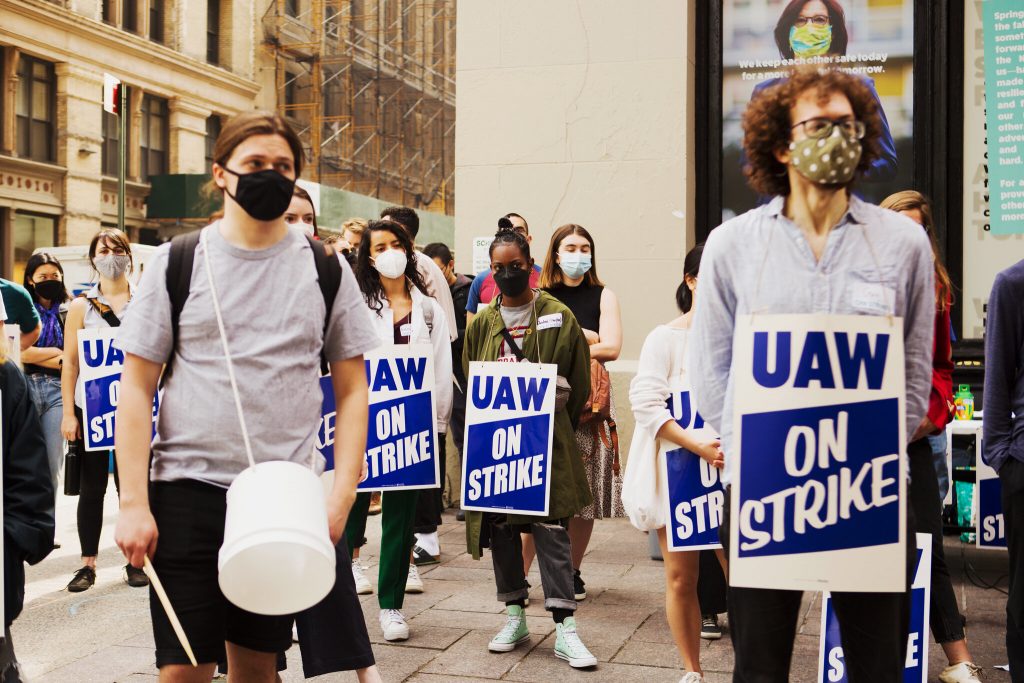 This week, adjunct faculty at NYU (UAW Local 7902) came to a new tentative agreement with the university administration. Major gains include a new minimum pay of $10,400 per standard course (a raise of nearly $4,000 per course), a $2,000 pandemic pay bonus, pay parity for instructors in the arts, and significantly expanded health benefits.

NYU adjuncts’ new raises are good, but we must be clear that these are the bare minimum. Even these wages at the summit of nationwide adjunct pay don’t measure up to even basic industry recommendations. Yet, these gains are significantly more than what adjuncts make at the City University of New York (CUNY). NYU adjuncts show the way forward for the faculty, adjunct, staff, and student workers in the Professional Staff Congress (PSC-CUNY) union, who are about to begin their own contract negotiations.

These wins at NYU were only possible due to the union’s successful strike campaign, in which 95 percent of voting members authorized a strike. It was clear to NYU that faculty and students were mobilized and ready to take action. In order to avoid the disruption of a strike, the university made significant concessions in the final hours before the contract expired during a marathon 14-hour bargaining session.

This tentative agreement shows the power of what a credible strike threat can do — and that’s a lesson that all unions should learn from. As the Columbia adjunct struggle last year showed us, a strike can defeat even the most intransigent administrations.

Right now, most of the faculty unions in the greater New York City area are either in the middle of bargaining or will begin bargaining soon. These include unions at The New School (UAW Local 7902, the same as NYU), Rutgers (AAUP-AFT), Fordham (SEIU Local 200United), and CUNY (PSC-CUNY). All of the unions at private universities listed above are currently in the middle of their own strike preparations — and CUNY needs to join them.

CUNY adjuncts, who teach about half of the classes at New York City’s biggest university make poverty wages: a meager $5,500 per course. With a full course load of 4 classes a semester, that means $42,000 a year, before health insurance and taxes — an unlivable wage in New York City. Meanwhile, most if not all of the 250 new full time lecturers CUNY hired last year, who teach the same course load, are making at least $75,000, with a much better benefits package than adjuncts. $75,000 should be the bare minimum for those who educate the working class of New York City. Yet, adjuncts and these lecturers do the same work, but get paid significantly less. This two-tier system drives down wages for all CUNY professors, as well as lowers wages and standards across universities throughout New York City.

Compare CUNY adjuncts’ meager wages to that of the CUNY Chancellor, Félix Matos Rodríguez. He makes over $670,000 a year and gets a “monthly housing stipend” of $7,500 — more than an adjunct is paid to teach a class for a whole semester.

CUNY adjuncts are not given any job stability, such as assurances that they will be given courses each subsequent semester. So at the end of every semester, adjuncts must hope for a job — even adjuncts who have taught at the same school and in the same position for years. Adjuncts are in constant threat of losing health insurance as well: If they don’t have two courses per semester for two semesters in a row at the same CUNY school, they lose their health insurance.

It is clear that CUNY adjuncts organized in the PSC need to organize, mobilize, and be ready to strike if they are not provided with a real living wage and a fair contract for all members of the PSC.

The PSC has time after time accepted mediocre contracts, especially for adjunct faculty. Just two years ago, we fought for $7,000 per class for adjuncts, demanding “$7K or strike.” In the contract struggle before that, over 95 percent of the PSC voted to authorize a strike, and yet the union leadership, rather than mobilizing its members to walk out to win parity for adjuncts, used the vote as a way to win a slightly better but still weak contract.

The truth is that there is no way to fight for dignified wages for adjuncts and a fully funded CUNY without employing our greatest weapon: the strike. In the end, if CUNY won’t give us what we need and deserve, we should withhold our labor until they do.

Yet, our union, the PSC, has historically been reluctant to strike due to the Taylor Law, which penalizes public sector unions that go on strike. But this is an anti-democratic, union-busting law that only serves to scare New York’s public sector labor movement into submission. It is a law that deserves to be broken — and not just broken, but smashed. Right now in Ontario, 55,000 public education workers are on strike in direct violation of a new law that fines individual workers C$4,000 and the union C$500,000 per day, which was fast-tracked through the legislature specifically to prevent a strike while unilaterally imposing a contract of raises between only 1.5 percent and 2.5 percent on the workers.

Last year, PSC-CUNY passed a Strike Readiness Resolution, but very little has been done since then to actually prepare the ground for a strike. When asked, union leaders point to the “contract action teams” that have been formed in each chapter, yet these teams are doing nothing to prepare for a strike. At the same time, the PSC’s adjunct liaison program — which pays part-time workers a small stipend to spend time mobilizing other part-time workers — is under threat.

Naysayers, particularly the bureaucrats that lead the PSC-CUNY, will claim that going on strike and defeating the Taylor Law is impossible — but that’s only because enough people believe it’s impossible. If union members stand together, willing and ready to organize a strike, we can win not just enormous raises for adjuncts, but all of our other demands as well: significant raises for all, remote work agreements, promotion opportunities, expanded healthcare benefits, better job security, and so much more.This can be achieved by building real working-class power and a fighting labor movement, which can win not only better raises at work, but broader demands for the whole of the working class.

NYU adjuncts have shown the way forward. It’s time to prepare to strike.