A Teacher’s Role in the Fight Against Police Brutality

Teachers have the responsibility to fight against racism and police presence in schools. 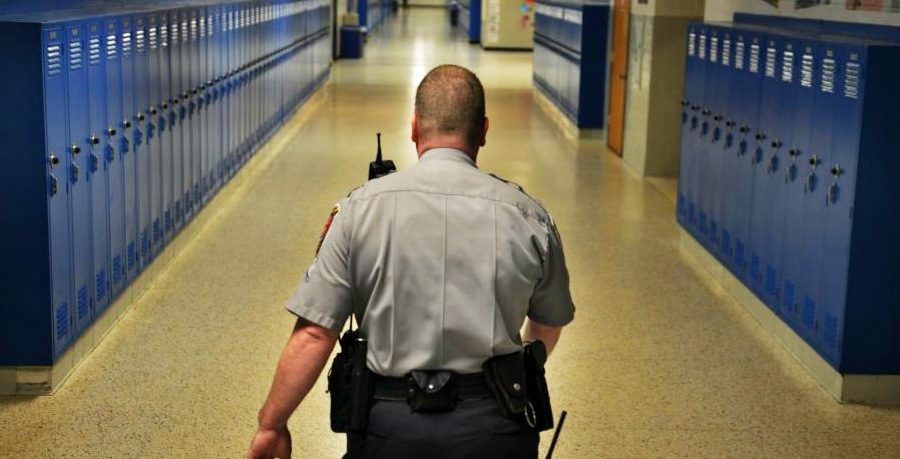 We know about cops’ sheer disdain for Black life. Just this year, the cops have killed 136 black people. We have seen the legal system refuse to bring indictments against cops who kill and we have seen that it is almost impossible for cops to be convicted. Last week, the cops killed two Black men, two days in a row. First, Alton Sterling was shot while being restrained by the police, then, cops shot Philando Castile four times with a four-year-old child in the backseat of the car.

The cop shot Philando Castile knowing full well that there was a child in the backseat–a child who herself could have been hit, could have been killed, and will most certainly have been deeply traumatized by witnessing a murder at four years old.

This is indicative of the deep discrimination that Black kids face every day, some of it interpersonal and much of it institutional. The fact that the cop had so little regard for Castile’s life, as well as for the life and well-being of the little girl in the backseat of the car is not an exception, but one link in a chain of violence.

Those of us who are teachers should not be surprised by this blatant disregard for Black kids. The school system itself is one of institutionalized discrimination. To begin with, low-income kids, especially those of color, attend overcrowded, subpar schools. Beyond not having the resources that wealthier public schools and private schools have, such as high tech computer labs and science labs, many of these schools lack basic sanitation.

Just this year, Detroit teachers brought the nation’s attention to abhorrent conditions in schools that lacked basic hygene and infrastructure by calling out sick. Eighty percent of the students in Detroit’s rotting, mouse infested schools are Black, demonstrating that racism is not only a bullet from a cop’s gun, but is also the mold on the walls of Detroit schools.

Discrimination against Black kids happens every day in schools: while white children who misbehave are “kids being kids,” the body language, dress, language, and behavior of Black children and youth are criminalized. White kids are put on medications when they misbehave (a terrible practice in itself), under the assumption that they are “good kids” who just need help staying focused, while Black kids are suspended and arrested. In fact, a study by the American Psychological Association found that Black boys are seen as “older and less innocent” than whites. Black kids, especially Black boys, are more likely to be classified as “overly aggressive” and are more frequently suspended for minor infractions, such as writing on desks or “talking back” .

This forms the first link in the school to prison pipeline, which feeds Black people into the largest prison industrial complex in the world. Black kids are over-punished in schools because they are not perceived as kids, whose personalities are in development.

As the past years have shown us, institutionalized racism is lethal when it comes to the police. From Mike Brown to Freddy Grey to Tamir Rice to Alton Sterling, we have seen over and over again that cops kill Black people. We have taken the streets and blocked highways against these killer cops. Yet, teachers should think closer to home when organizing against police brutality–teachers should organize within their own schools.

Teachers around the country need to take a stand and organize against institutionalized racism in schools, whether in racist disciplining or in race- and class-based inequalities in schools. Teachers unions should follow the lead of Detroit and Seattle teachers who just this past year organized to address injustice in their schools.

During the Seattle teachers’ strike last September, teachers demanded racial justice and proposed “race and equity teams” at every school in the district to identify inequalities and make specific recommendations. Though this small initiative and the strike alone are not enough to end racism in public schools, the Seattle struggle provides an important example for other teachers unions and education workers to follow.

Get Cops Out of Schools!

The discrimination against Black kids is exemplified by the push to ramp up police presence in schools. Over a quarter of US schools have police , and as is to be expected, the greater the non-white population in school, the greater the police presence. The underlying assumption is that Black, Latino, and other students of color are dangerous, so police must be called in to contain them. Instead of providing small class sizes, more guidance counselors, safe infrastructure, art and music classes, etc., many school districts choose to hire cops for full-time surveillance in schools. They treat kids like criminals and minor infractions like criminal offenses. The brunt of this policing is felt by Black children.

Since last year, the country has been shaken by multiple videos of cops beating and abusing Black teenage students. The most notable perhaps is the Spring Valley High School video, in which a cop puts a 16-year-old girl in a chokehold and arrests her. Another example took place in Philadelphia this year, after which the Philadelphia Student Union led protests against police in schools, but failed to win their demand, the removal of school cops. Even elementary school kids are targeted, as was the case with ten Black elementary school students who were arrested for “bullying” . Clearly, schools must address bullying, but arresting 9-year-olds and throwing them in a detention center is not the answer. Needless to say, a white student would not be treated that way.

Unions Should Organize A Strike!

Faced with the reality of daily police violence, teachers must organize with a clear message: “We cannot trust the cops with our students.” The cops have shown over and over again their disdain for Black life. Teachers cannot allow them to continue their racist violence in schools.

For teachers, this means organizing through unions to kick cops out of the school system, demanding union leadership to make a commitment to end policing and follow through, and making immediate steps like the establishment of race and equity teams to fight racist attitudes in every school.

It is not enough for teachers to join the BLM protests. Teachers all over the country should follow the example of those in Seattle who fought for racial justice during their strike. Teachers must be prepared to strike to get cops out of their schools. That’s what it means to organize for a society where Black Lives Matter.