A Teacher’s Tale: The Day after Trump’s Win

A teacher shares her experience in the classroom the day after Trump was elected. All K-12 and university teachers are invited to share their experiences with Left Voice in a paragraph or more. Email [email protected] or send us a facebook message with your story. 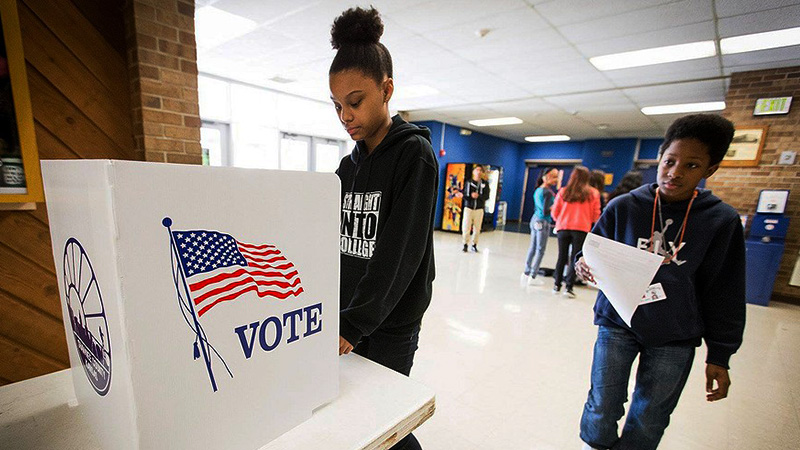 It’s been a really really strange week full of darkness and fear despite the sparkling November sun each day. At my tuition-free middle school for girls in New Bedford, MA, we held a mock election on Tuesday, the culmination of many weeks of study in humanities and public speaking classes. We also held school-wide Morning Speaker presentations related to electoral process, history, and trends. We not only studied the race for president but political rhetoric, the ballot initiatives and other aspects of state and local government. Parents designed, built and worked our mock polls. Sixth graders made visuals and reminded the school of our norms for the election– commitments to “Think for Yourself,” “Value All Ideas,” “Be informed” and “Your vote is confidential.” When the big day finally came, there was a palpable excitement. Many student-voters exited the polls feeling proud, proud for participating and many felt especially proud for supporting who they hoped would be the first female president of the United States. One remarked, “I felt nervous in there. My hand was shaking.” I replied, “Yeah, voting is a lot of power.”

Wednesday morning was tough, surreal and disappointing. We humanities teachers took over and dedicated our entire class periods to processing the results and feelings. One teacher read feminist Roxane Gay’s essay published that morning entitled “The Audacity of Hopelessness” then offered an original “My America” poem structure and mentor text for students to adapt. I provided time and space for reflective writing and then facilitated discussion circles. There were tears and there were expressions of fear and frustration: “I’m afraid my dad will be deported. He’s not a citizen yet.” To which another student assured, “My mom works with immigrants. We can help him get citizenship.” There was also a tiny handful of girls who were pleased with the results. They had voted for the president-elect in our mock election. They did not gloat, but they did speak up when the talking piece came to them.

And so, our tiny community of learners sat on the rug, actively and gracefully dealing with difference and practicing the incredibly difficult but necessary work of listening to learn from each other. When one fifth grader asserted that the winning candidate had “made mistakes like other human beings,” a peer explained, “But being racist and sexist isn’t a mistake when you do it over and over and over again.” Ultimately, we committed to take care of each other. I urged them to become the best readers and writers and speakers and listeners they can. I assured them that I personally and the other grown-ups at school would stand up for them and their families. I went around the circle and looked every single one of my girls in the eye and told her she mattered, which made them all smile. And at lunch, a particularly savvy seventh grader declared, “Well, when I run for president….”

So, as panicked as I felt in the morning, it was impossible to leave the building that night without love in my heart.

K-12 and University teachers, send Left Voice your experience in the classroom the day(s) after the election in paragraph or more. Send your experience to [email protected]

Other teacher responses:
A Class Divided: A 5th Grade Classroom in a Red State

A Teacher’s Tale: The Day After Trump’s Victory