A Tour of Views on China’s Relationship to Imperialism

To complement “China and Imperialism: Elements for the Debate,” which explores how to characterize China within the imperialist system, this article presents some of the alternative positions. 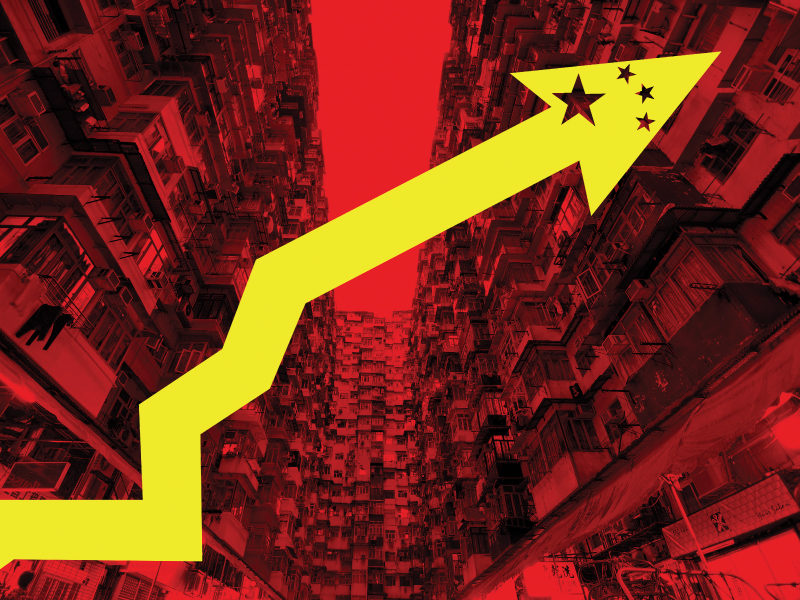 Opinions on the question of China and imperialism can be found along a spectrum. At one end, we find authors such as John Smith, whose views are expressed in his book Imperialism in the Twenty-First Century. It is one of the most comprehensive studies, from a Marxist perspective, of global value chains as a mechanism through which imperialist countries exploit (“super-exploit,” as Smith puts it) the labor force of dependent and semi-colonial countries.1 But it has a fundamental problem, which is how to fit China into this scheme. As Smith expressed in an interview, he tends to situate it more like the global South, that is, in a space that is subjected to pillage by the multinational firms of the imperialist countries. And while he recognizes aspects of China that could transcend that position, he tends to minimize these quite quickly.2 Smith begins from the dominant role foreign capital has played and continues to play in the country’s foreign trade, which at the same time is a fundamental key to China’s economic strength and has converted the country into the planet’s great “creditor.” Multinationals operate either with their own subsidiaries or by hiring supplier firms; in one way or another, they participate in the exploitation of a Chinese labor force to which they pay lower wages than to the working class in their home countries or even in other dependent and semi-colonial countries.3 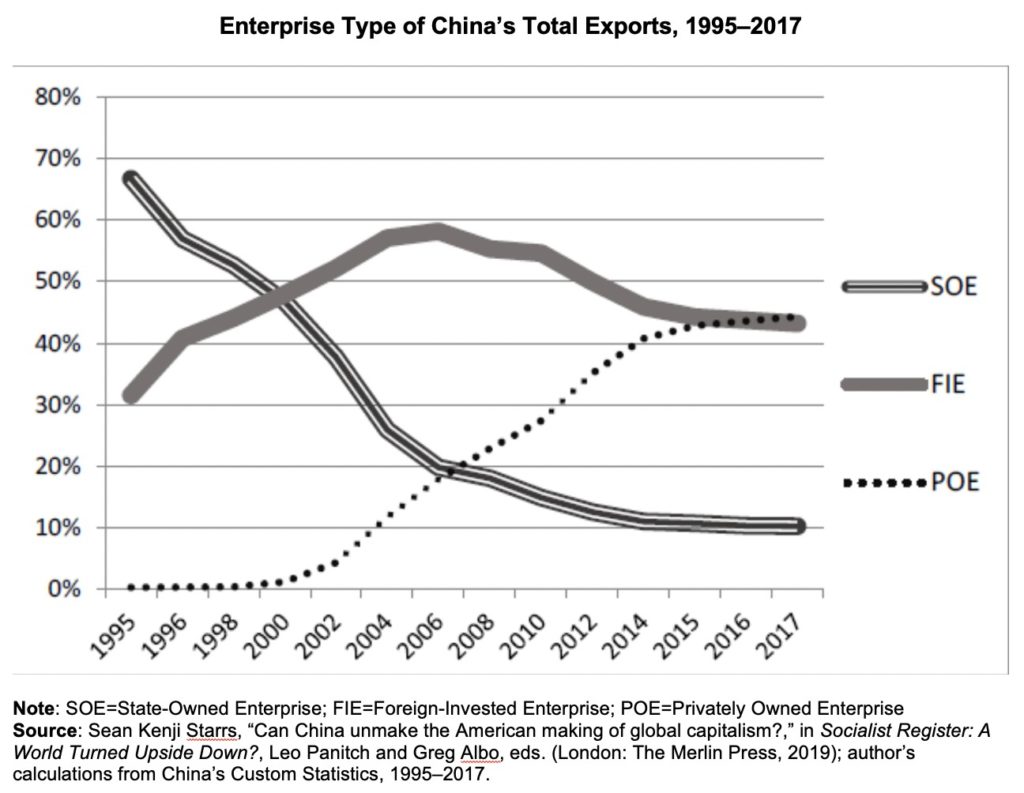 Minqi Li characterizes China’s situation along the same lines.4 He starts from the world-system theory of Immanuel Wallerstein, who studied the history of capitalism as a succession of long cycles and stated that the world system is organized as a center, a periphery the center exploits, and a semi-periphery in between the two that is partly exploited but that also participates in the exploitation of other territories, playing a “cushioning” and stabilizing role in the order of domination. Li affirms that China continues to be located in the periphery, but what he means by “periphery” should be clarified. He is not questioning the prominent, central role China has played in the world system; he refers to it as peripheral because of the way in which the country ultimately loses in its exchanges with the world’s powers, to which it transfers its surplus.

Li’s argument is based on the “labor term of trade” that “tells the degree to which a country gains or loses through unequal exchange in the capitalist world system.”5 Li argues that while China has favorably modified its labor term of trade with some regions (East Asia, South Asia, Africa), it maintains unfavorable labor terms of trade with the rest of the world. In other words, in his scheme, China became “a net ‘exploiter’ in its trade with East Asia, Southeast Asia, and the African peripheral economies,”6 but the opposite is true with the United States, Europe, the Middle East, and even Latin America. Li remarks, however, that it is very likely that soon, “China’s labor terms of trade are likely to turn favorable against not only all the peripheral economies but also most of the semi-peripheral economies. By then, China will become a semi-peripheral state.”7 But Li does not consider it possible for China to go further, because “Given China’s enormous economic and demographic size, [its] entry into the semi-periphery will have fundamental implications for the operations of the capitalist world system and may suggest that the … capitalist world system has reached its limit.”8 That is, it would represent such a destabilization of the system that it would threaten its collapse. While Li, unlike Smith, places China in a subordinate position, he characterizes its advance as irrepressible and states that the system cannot process it under current terms.

To what extent do these positions describe China’s objective place today? It is correct to point out that the Chinese labor force continues to be exploited by imperialist capital — exploitation in which local Chinese capital also participates — and that investment and trade with the Asian giant is a source of increased profits for global capital and the imperialist countries. But China managed, at least in part, to exchange the profit it has generated for multinationals for favorable conditions under which to develop its own productive forces, in a quid pro quo no other dependent country has had. The massive attraction of capital to its economy and the foreign trade currencies provided by the reserves of the People’s Bank of China has nourished the country with resources for its own investments abroad and for building a containment fence to prevent the country from going through an episode similar to the Asian crisis of the late 1990s. In this sense, China does not repeat the dependency patterns of other poor or developing countries in which foreign investment or industrialization for export ultimately does not lead to a qualitative leap in the level of development, except for peculiarities that are mostly explained by exceptional geopolitical conditions.9

Two reasons have converged to produce this result. The first has to do with the scale of the attraction of capital and exports generated by China, even when the multinational companies appropriate a significant part of the value of the chain as a result. The resources — and above all the foreign currency — left behind as the local balance for investment are still massive in absolute terms, creating a potential “win-win” situation for both imperialist capital and the Chinese bureaucracy. The second is that the relative continuity of elements inherited from the nationalized economy, such as a certain monopoly of foreign trade and the financial sector that continues to be quite disconnected from global finance, limits the outflow of surplus.

The scale of the investments attracted from abroad, added to those of China’s public enterprises, generated chain effects, expanding “production for production’s sake” — the growing establishment of new productive sectors aimed not only at exporting finished goods to other countries but also at supplying an increasingly complex productive system. Added to the (often failed but sometimes successful) efforts of the bureaucracy to associate with foreign firms as a way to obtain technology directly or steal it, this has allowed for substantially increasing the level of development beyond anything seen in a peripheral country during the last century or so far in the present one — even though this has gone hand-in-hand with a dominance of foreign capital in China’s foreign trade. That China’s labor force is “super-exploited” by foreign capital and that such exploitation has been the basis for China “climbing the economic ladder” are two sides of the same coin.

Another position is that China will continue its economic rise to position itself among the great capitalist powers, but as Ho-fung Hung has written, China “is far from becoming a subversive power that will transform the existing neoliberal order because China itself is one of the biggest beneficiaries of this order.”10 Hung underlines all the aspects that push China to maintain its involvement in sustaining the current order, including that to stop financing the United States is a danger for China itself. The book’s hypotheses have aged quite poorly in the four years since its publication, as the two countries have escalated their confrontation.

As a mirror position to that of Hung, we find the thesis that China is not only already ascending irrepressibly, but is doing so by playing a benign role in the world order — that is, effectively “subversive” of the imperialist order. This is what Giovanni Arrighi proposes in Adam Smith in Beijing.11 He identifies elements in the history of China prior to the European invasions to define the existence of a non-capitalist — that is, non-exploitative — market economy. He argues that this, and not bourgeois restoration, would be what might be resurfacing now and that it is what China would project to the rest of the world. For decades, Arrighi elaborated the thesis on hegemonic successions that maintains that capitalism developed through increasingly greater cycles in which, successively, the Italian city-states, the Netherlands, Great Britain, and eventually the United States dominated, each imposing different combinations of economic organization and territorial power.12He concludes that the new “succession” would close the cycle because it would no longer be capitalist.

Without ascribing to the more eccentric theoretical elements of a non-capitalist mercantilization of China, Arrighi’s idea that the country could be a counterweight to U.S. and European imperialism is taken up today from different angles. David Harvey — whose vision of the “new imperialism” is openly dependent on Arrighi’s notions of the relationship between economic and territorial power, although Harvey reformulated them — once suggested something along these lines. We see it especially in political currents that, from the periphery, suggest developing a partnership with China.

Finally, there are those like Au Loong-Yu who point to China’s imperialist course while maintaining that it has not been consummated. The first reason is the pending national integration. Yu says:

Before China can achieve its imperial ambition it has to eliminate its burden of colonial legacy, i.e., take over Taiwan and accomplish the CCP’s historic task of national unification first. But this will necessarily bring it into conflict with the US sooner or later. Hence, the Taiwan issue simultaneously carries both China’s self-defense dimension (even the US acknowledges that Taiwan is ‘part of China’) and also an interimperialist rivalry. In order to “unify with Taiwan” not to speak of a global ambition, Beijing must first overcome China’s persistent weaknesses especially in its technology, its economy, and its lack of international allies.

China is a distinctive state capitalist power and an expansionist one, which is not willing to be a second-rate partner to the US. China is thus a component part of global neoliberalism and also a state capitalist power, which stands apart from it. This peculiar combination means it simultaneously benefits from the neoliberal order and represents a challenge to it.”13

Pierre Rousset is another author whose position is in the same vein as Yu.14

As we can see, the positions on where China stands in relation to the imperialist powers could not be more divergent. As I have argued, to consider China as an imperialist country in the process of being constituted or under construction seems the best way to grasp a situation that continues to have transitory elements, but at the same time marks the direction in which China is moving — although its success in this undertaking is by no means assured.

First published in Spanish on November 15 in Ideas de Izquierda.