“A Very Stable Genius”: A Review of Fire and Fury

Michael Wolff’s new book gives a vivid description of the moving pieces within the Trump administration and the resulting total lack of internal stability. 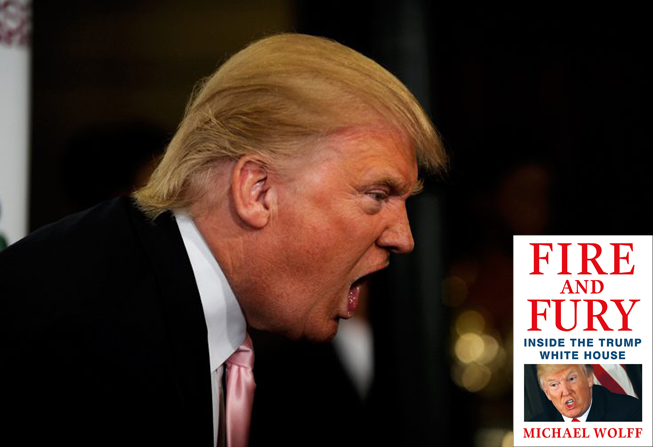 Fire and Fury by Michael Wolff is a chronicle of much of the first year of the Trump administration. Michael Wolff is a journalist known for splashy biographies and exposés of “movers and shakers” of the media, technology, and business worlds including a 2008 best-selling biography of Rupert Murdoch and a 1998 book about the early internet moguls. While both books were generally well received, some of Wolff’s facts have been called into question and he has been accused of embellishment.

In 2016, during the presidential primaries, Wolff interviewed Donald Trump for the Hollywood Reporter, and he later used the connections he established to obtain unprecedented access to Trump’s White House, with no ground rules or subjects predetermined to be off-limits. Wolff describes a highly chaotic administration with competing fiefdoms and no one to control with whom he talked. He obtained much of his material simply by being at the White House as an observer and from interviews that his subjects seemed to have regarded as off the record. The book was originally supposed to chronicle the first hundred days of the Trump Administration, conventionally regarded as a landmark in any presidential term. Due to the tumultuous events of the early Trump White House, however, it continued for over two hundred days — from the beginning of the administration until about a month after retired General Kelly became Chief of Staff and Steve Bannon left — at which point some order seems to have been brought.

Wolff portrays Donald Trump as man with a towering but fragile ego and a short attention span, and he says repeatedly throughout the book that Trump does not seem to understand the principle of cause and effect. Trump has little interest — and possibly limited ability — in reading. His staff have tried to simplify reading material and memos to no avail. Wolff describes a man who, despite having a deeply authoritarian personality, seems to have no agenda and little understanding of the role of the president or of the political process, and little interest or ability in administrative affairs. The chaos and dysfunction of the Trump Administration have been widely reported over the past year. Wolff, however, makes this situation come alive as he vividly describes the extreme levels of factionalism and power struggles within the administration, with Trump himself appearing to have no interest in, or ability to, provide structure.

An early major influence on the Trump Administration was the right wing media empire of Robert Mercer and his daughter Rebekah. Mercer; Robert is a highly eccentric individual who funded various right wing causes, including Breitbart News.

By the summer of 2016, the Trump campaign was in disarray, facing constant media attacks and substantially trailing that of Hillary Clinton. As the campaign was floundering, Mercer’s organization effectively took over, placing Steve Bannon, the then editor of Breitbart, in a leadership position. At this point, especially in the wake of the exposure of Trump’s boasts about his sexually predatory behavior, it seemed inconceivable that he could actually win. Wolff describes a moment of shock when it became apparent he would actually become president; Trump was at first befuddled, then horrified, and then finally came to an egotistical sense of his own destiny,

Wolff describes how various figures had hoped that a stint in the Trump campaign would help jump start their careers in conservative media or politics. Steve Bannon, the only intellectual in the Trump administration and a populist-nationalist with a penchant for proto-fascism, would “become the de facto head of the Tea Party movement.” Kellyanne Conway would become a cable news star, Reince Priebus and Katie Walsh, conventional Republicans, would “get their Republican Party back,” Trump’s daughter Ivanka and son-in-law Jared Kushner would be transformed from “obscure rich kids” to “international celebrities and brand ambassadors,” while Trump himself would be the “most famous man in the world” and a “martyr to crooked Hillary.”

A period of confusion ensued as the incoming administration scrambled to organize itself, decide on policy, and find a chief of staff to run the administration. Various figures were considered for the position, with none seeming to be politically acceptable. Trump finally settled on Reince Priebus, the former chairman of the Republican National Committee. Priebus turned out to be a weak leader, beset on all sides by warring factions and with a confused and unclear mandate from Trump.

A faction formed around Bannon, who served as Trump’s chief advisor and for a time had a seat on the National Security Council. Wolff says Bannon “claimed to be the leader of the nationalist-populist movement” and in an odd way, saw himself as fighting a working-class struggle against globalism. He was responsible for the Muslim travel ban and the departure of the U.S. from the Paris Climate Agreement. Despite being an ideologue, Bannon seemed to have understood the political process and institutional prerogatives far better than other people close to Trump.

The other major faction was led by Trump’s daughter and son-in-law, Jared and Ivanka Kushner. Wolff calls them “Jarvanka” (a term coined by their rival, Steve Bannon) and describes them as “Goldman Democrats” who reflected the views of Wall Street, a milieu which supported lowering trade barriers, globalization, and a degree of social liberalism.

Compounding the growing problems with factionalism was Trump’s problematical relationship with reality, exemplified by his insistence on massively inflated claims of attendance at his inauguration. Trump often agreed with whomever he spoke with last and was highly susceptible to flattery. Bannon, originally the most powerful figure around Trump, was initially able to play to his need for adulation. “Jarvanka” became increasingly worried about Bannon’s protectionism and the possibilities of a trade war. An increasingly tense struggle for influence between Bannon and Jarvanka developed, with the mainstream conservative Republicans, who seemed to see themselves as doing damage control for a surreal administration, caught in the middle.

Wolff does not seem to give much credence to accusations that the Russian government directly interfered in the U.S. election. He does describe Jared and Ivanka as politically inept, responsible for several major political blunders related to Russia during the period covered, including Trump’s firing of FBI Director Comey .

After a long period of chaotic power struggles and political blunders, retired General John Kelly was hired to “tame the chaos.” He quickly began tightening the White House lines of communication and greatly restricted access to Trump, including that of Jared and Ivanka.

In mid August, Bannon, perhaps tiring of the White House political battles and undercut by the outrage surrounding Trump’s racist dog whistles after the murder of Heather Heyer in Charlottesville, seemingly committed political suicide by condemning Trump’s confrontational policy towards North Korea in an interview. He was fired shortly thereafter.

Fire and Fury is a highly entertaining read. It created something of a bombshell among the political and media elite and bootleg PDF files of the book were widely circulated on social media before being blocked by Google Drive. Even before publication, the book elicited anger from the White House, with Trump himself sending a series of tweets seemingly even more bizarre and unhinged than usual. Immediately before the book’s publication Trump claimed, in reaction to his portrayal in the book, that he is “like really smart” and then described himself as “a very stable genius,” adding to the cartoonish image the Trump Administration had already drawn of itself.

The chaotic events of the Trump presidency described in the book highlight the dominance of finance capital, with most top advisors coming from the finance sector. The mediocre and largely incompetent people surrounding Trump show a ruling class oriented towards short-term money making, unable to attract and cultivate any sort of administrative talent. Despite some initial indications to the contrary, the Trump Administration is continuing and expanding the imperialist military adventures of the last four presidents and is using tax reform (which was rolled out after the events in the book) to pursue neoliberalism with a vengeance.

Fire and Fury implicitly shows a ruling class in disarray, consumed by infighting, unable to focus on coherent foreign or domestic policies or any long term strategy. This in turn seems to reflect the results of decades of hollowing out of democratic institutions and the dominance of finance capital, huge media oligopolies, and the military, all of which play major roles in the Trump Administration.

Trump’s election was largely a reaction to the decades of neoliberalism, horrifically expensive militarism, and destructive imperialism pursued by both parties. His promises to reverse these practices quickly turned out to be illusory.

However, the dysfunctionality of the Trump Administration should not lead us to support the Democrats in 2018, which would merely serve to continue the same problems of inequality that led to the election of Trump in the first place. Instead, to actually “drain the swamp,” we will need to build political movements independent of both parties and of the large concentrations of capital which control them.