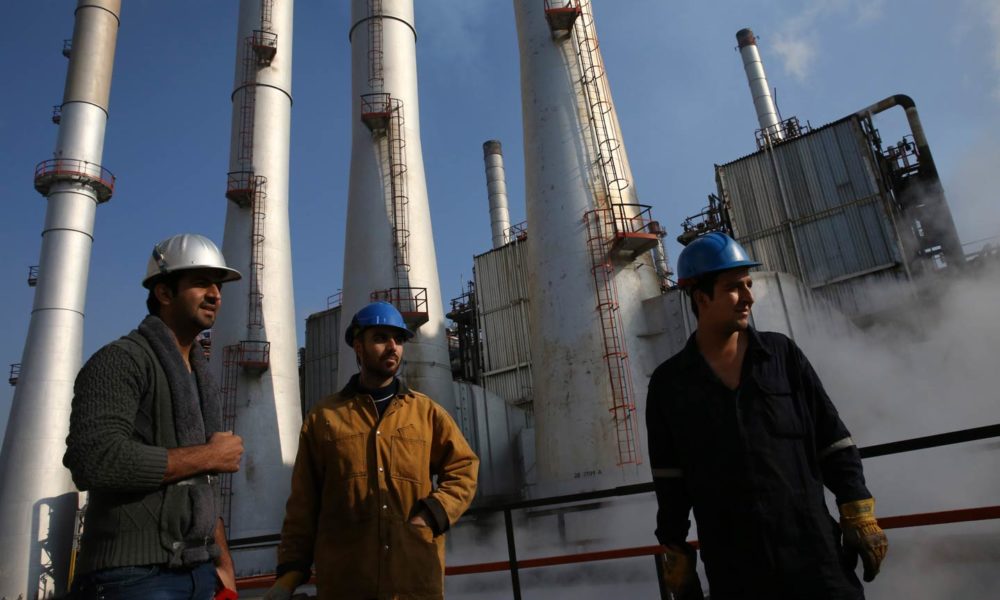 Since August 1, workers in at least 16 Iranian industrial centers have gone on strike to raise their demands in the face of the economic crisis that is suffocating the population. Among them, the immediate payment of salaries owed, the fall of the anti-union laws of the clerical regime and better working conditions in a region that is experiencing a major drought with temperatures of up to 122 degrees. Strikes followed one after another in various petrochemical and refinery plants, primarily in the south of Iran, but other sectors such as the metal-mechanic and mining industries also joined these strikes.

This has been the largest coordinated action in the 40 years since the Iranian Revolution, during which a broad organized labor movement participated, culminating in the triumph of the current theocratic regime. The strikes began on Saturday in Khuzestan where the most important gas fields in the country are located and quickly spread to refineries in central Iran. Most notably, a group of workers in Isfahan went on strike on August 4, in an unprecedented measure that reached at least 10,000 workers in the oil sector, which includes deposits, petrochemicals and refineries.

Some of the workers from different companies that have been supporting the strike since August 1 include workers from Abadan Oil Refinery, Parsiana Refinery in Kangan, Lamerd Petrochemical, Qeshm Heavy Oil Refinery, IG and Jam 2 in Asaluyeh, Atropart Company in Joffair Refinery (south of Ahvaz), Exir Company in Asaluyeh, Asaluyeh Pars Phenol Petrochemical, Asaluyeh Sina Sanat-e Ahmadpour, Asaluyeh Petropalayesh Refinery, Mahshahr Razi Refinery and Tous Dashte Azadeghan Asphalt Company. The strikes are hitting oilfield projects in Iran which were thought to be crucial for the government in order to face the high levels of hyperinflation in Iran’s relatively undiversified economy. 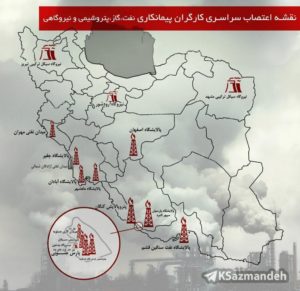 Among these protesters include builders, electricians, welders, and various trades people working under contract at the world’s largest natural gas field. These workers have work cycles of 20 days of work for ten days off, and stay in residences near the work site during working days.The goal of the strike is to resist working a full 20-day shift cycle, which would have a major impact on the oil giant’s production.

Aug 1—Abadan, SW #Iran
Employees & workers of the Abadan refinery, along with their colleagues from the Parsian refinery & Lamerd petrochemical have gone on strike, protesting not receiving their wages & pensions.#IranProtests2020 pic.twitter.com/SIJSpQWqQI

The straw that broke the camel’s back, pushing thousands of workers to strike, was the death of Ebrahim Arabzadeh, a contract worker at the Mahshahr petrochemical complex, who was exposed to extreme heat reaching 122 degrees while working.

These are some of the unbearable working and living conditions that Iranian oil workers are forced to work in. At the same time, there are no trade union rights as a result of the persecution by the Revolutionary Guard Corps of the Republic of Iran (IRGC) which imprisons leaders whenever they arise. Economic sanctions imposed by U.S. imperialism, an inflation rate of about 40 percent, and the deep crisis triggered by Covid-19 all exacerbate the already dire situation of workers in Iran.

The direct impact of U.S. policy has been a 80 percent reduction in oil production, triggering unrest from workers and the poor in Iran who are protesting against the economic conditions they face despite the absence of formal unions or political leadership.

The situation of the working class in Iran is brutal, with 70 percent of workers in the oil industry working for contractors. In the “special economic zones” or “free zones,” workers are exempt from labor laws, so there is a dictatorship of the bosses. Workers have no access to cooling systems and face sweltering heat and of course, the independent unionization of workers is prohibited, while legal unions are just another state body. Workers who are obliged to sign precarious work contracts do not have access to health insurance, retirement coverage, and  can be dismissed at any time the employer wishes. Their salaries are below the poverty line, while many have not been paid for months in a context of rising unemployment which, according to official data, has reached 27 percent among young people. In addition, an expected 4 million people among the working class will be unhoused due to the Covid-19 crisis.

In the Haft Tappeh Sugarcane Factory, workers have been on strike for 53 days. This ongoing strike has continued despite the fact that the leaders of the strike are in prison for organizing strikes in 2019. One of them is about to be executed by death penalty. The demands of these workers include payment of owed wages, reinstatement of dismissed workers, expulsion of corrupt officials, a refund of embezzled funds, and even historic demands against privatization.

The deprived workers of the Haft Tappeh Sugarcane Company continued their strike on Saterday, Aug.1, for the 48th consecutive day by holding a march in the city of Shush in the oil-rich province of Khuzestan, southwest Iran.@labourstart pic.twitter.com/BMfnscMwEK

The oil and gas workers’ strike has provoked solidarity from unions, students, teachers, retirees and women’s rights activists. The Vahed Workers and Drivers Union and the Haft Tappeh Sugarcane Workers’ Strike supported the oil workers. 12 unions, retirees, students and childrens’ rights activists issued a joint statement expressing solidarity with the oil workers. The women’s group Arzem (Women’s Liberation) also defended the workers’ strike in a statement as part of the women’s movement, condemning any attack against them. The Union of Mechanics and Metallurgists also joined in, announcing that the strike has spread to 22 industrial centers so far, and that 4,000 workers are participating in the strike. The workers of HEPCO (Heavy Equipment Production Company), an important heavy machinery factory that is fighting against the conditions imposed by the privatization in 2017, also joined, starting a new round of strikes and protests.

Iranian oil companies maintain a strategic position of strength in the country. The Islamic Republic is deeply dependent on oil and gas production, which is why U.S. sanctions are having such an impact on one of the countries with the largest hydrocarbon reserves in the world. Relations with the US have become increasingly strained since Trump’s withdrawal from the nuclear agreement. Tensions peaked in January with the assassination of Qasem Soleimani. Increasingly, Iran has been thrown into the arms of China, at a time of growing geopolitical tensions between China and the U.S.

The sectors of workers involved in these strikes, bus drivers from Tehran, oil workers from Khuzestan and sugarcane workers from Haft Tappeh, have a long tradition of struggle. The Iranian regime has not issued a statement on the strikes for the time being, but its reaction has  always been characterized by fierce repression – involving torture, kidnapping and murder of workers – combined with economic concessions to calm the waters. This time, however, the scope for concessions is very limited. There is a chance that the strikes will achieve the intended reforms, which can generate relative success for the labor movement. Or none at all.

Whatever the outcome, the current strike wave may be the basis for future workers’ protests in Iran. In November 2019, the government was severely challenged by mobilizations in major urban centers of tens of thousands of people over rising fuel prices and high living costs. At least 7,000 people were arrested and hundreds were killed in the repression. In May 2020, Iranians mobilized over water shortages in several regions hit by the Covid-19. From 2017 onwards, workers’ strikes have been positioned as a key factor in opposition to the Iranian regime which has become more polarized in the midst of increasing U.S. pressure, as shown by the recent triumph of the ultra-conservative (or intransigent) wing of the regime.

In order to solve these structural problems, it will be imperative that the labor movement, which is beginning to warm up its muscles, should promote mobilizations not only against the living conditions imposed by the Iranian regime, but also against the chokehold of imperialist sanctions. In principle, as one sugarcane striker said, “a hungry worker, even if he is whipped, will return to the streets”.

First published on August 6 in Spanish in La Izquierda Diario.