Abortion Access Will Only be Won Through a Broad Grassroots Movement

The attacks on abortion rights aren’t new. Here, Anne Rumberger explains why we can’t trust the Democrats, we have to build a movement for reproductive justice. 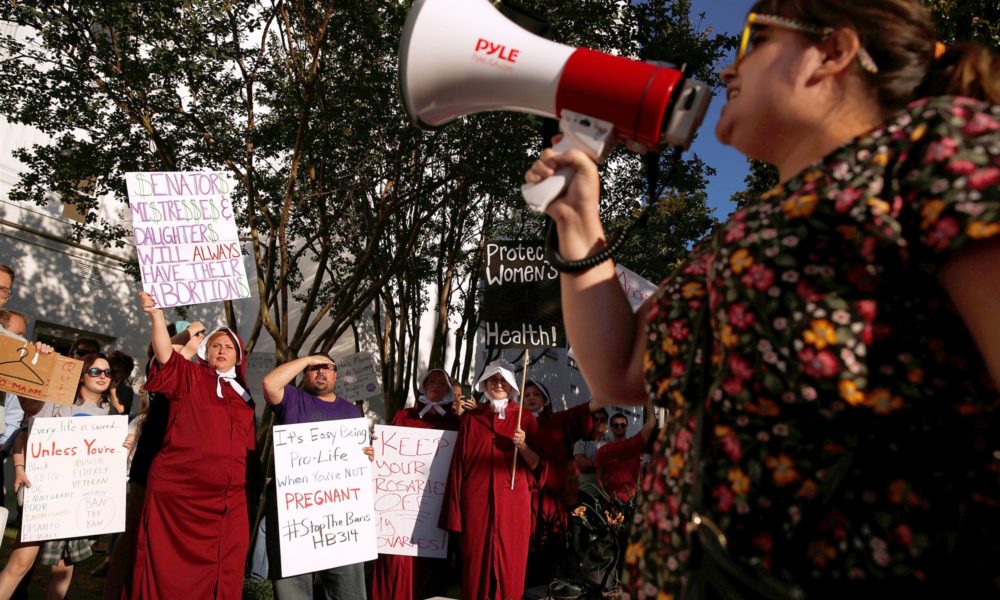 The wave of absurdly restrictive abortion laws passed in recent weeks are assaults on our reproductive freedom. We need to go beyond challenging these restrictions and fight for an expansive vision of reproductive justice that includes free abortion on demand as well as free healthcare, free childcare, paid parental leave, and freedom from state violence and racial oppression.

Alabama recently passed the most restrictive abortion ban in the country, outlawing abortion entirely excerpt in cases of a threat to a pregnant person’s life or a lethal fetal anomaly. It joins five other states–Georgia, Kentucky, Mississippi, Ohio and Missouri–that have passed so called “fetal heartbeat” bills in 2019, which ban abortion once a fetal heartbeat can be detected, as early as six weeks into pregnancy and before many people know they are pregnant.

Just days after Alabama’s abortion law was signed by the governor, the Missouri House approved a bill that would criminalize any abortion beyond eight weeks of pregnancy, except in cases of medical emergencies. Doctors in Missouri who perform abortions after eight weeks face five to fifteen years in prison while Alabama doctors who perform abortions could face up to 99 years in prison.

These bans are clearly unconstitutional, explicitly designed to make their way to the Supreme Court and challenge the precedent for legal abortion until fetal viability established in Roe v. Wade in 1973. There are already 13 abortion cases before circuit courts around the country, the last step before reaching the Supreme Court, and any one of them could provide an opportunity for the conservative-majority court to reconsider the right to an abortion set forth in Roe.

The Guttmacher Institute, a nonprofit group on sexual and reproductive health issues, says legislation is under consideration in 28 states to ban abortion in a variety of ways. These include “trigger bans” that would automatically make abortion illegal if Roe is overturned, “method bans” that would bar providers from performing a specific type of abortion; “reason bans” that would prohibit abortion based on fetal characteristics, such as sex, race or disability status; and “gestational age bans,” prohibiting an abortion at a specific point in pregnancy, such as six, eighteen or twenty weeks after the last menstrual period.

Abortion access is already extremely limited for many poor people and people in rural communities. Some of the many restrictions include: 33 states which prohibit the use of state funds to pay for abortion, 11 states that restrict coverage of abortion in private insurance plans, 18 states that mandate pregnant people be given counseling before an abortion that can include the false claim that there is a link between abortion and breast cancer, 27 states that require a waiting period between when a person receives counseling and when the procedure is performed, and 37 states that require some type of parental involvement in a minor’s decision to have an abortion.

How did we get to this point? And how can we revive the radical grassroots movement that won abortion rights in the first place?

Depending on Democrats won’t help us win

It’s clear that the strategy of relying on Democratic politicians and mainstream reproductive rights organizations to protect reproductive healthcare has been a losing one.

The Democratic party, which has long made claims of being “pro-choice” and “pro-woman” has in fact never been a full-throated supporter of abortion access. When the Hyde Amendment, which prohibits federal money from paying for abortions except in cases of rape, incest, or life endangerment, emerged in 1976 from the backlash to Roe v. Wade, it was passed with 113 Democrats in support and signed into law by Democratic president Jimmy Carter.

Medicaid had been covering three hundred thousand abortions a year. After Hyde it covered only a few. Every Congress, both Democratic and Republican, has approved Hyde restrictions and every president, from Reagan to Obama, has allowed them. With the Hyde Amendment in place and the average cost of an abortion around $500, it’s no surprise that approximately one in four people who would have had Medicaid-funded abortions instead give birth when this funding is unavailable.

A language of defeat

The rhetoric around abortion rights has shifted in recent decades from the unapologetic slogans of the women’s liberation movement such as “free abortion on demand” to defeatist slogans like “keep abortion legal” and the moralistic position that abortion should be “safe, legal and rare,” a phrase coined by Bill Clinton in 1996. During her Democratic primary battle with Barack Obama in 2007, Hillary Clinton’s position mirrored her husband’s. “And by rare, I mean rare,” she emphasized.

Even the pro-choice language of abortion-supporting Democrats and the liberal reproductive rights movement is a huge backward step from the militant demands for free abortion without stigma put forward by abortion activists in the 1960s and 70s.

The choice framework was a pivot embraced by conservatives and liberals alike in the 1980s alongside the rise of neoliberalism. The language is designed to convince working and poor people that our problems are of our own doing, so we–not the government or corporations– must fix them ourselves. Choice is conflated with freedom, concealing the fact that who has money and power matters more than the choices on offer.

Those who fight for abortion rights as part of a reproductive justice framework have long made the argument that the ideology of choice leaves out those without the resources to be able to take advantage of the limited choices on offer. As the SisterSong Women of Color Reproductive Health Collective put it, the

conditions necessary for women to make reproductive decisions about their lives are opportunities to work at living wages, opportunities for affordable quality education, responsible and accessible public services such as good health care, quality schools, and accessible and affordable child care, freedom from personal and state violence, and environmentally safe communities.

When the right to abortion is framed as a choice, enough people are left out, particularly poor people and young people, that almost everyone ends up losing what should be a universal freedom.

Fighting for exemptions is a narrow strategy

The outcry over the recent Alabama and Missouri abortion bans for the lack of exemptions for rape and incest, while understandable, are also part of the problematic and defeatist position that the pro-abortion movement has succumbed to in recent decades. By emphasizing worst-case scenarios like rape, incest, and health crises, politicians and reproductive rights organizations are so focused on preserving what little we have left of abortion rights that they downplay the central role of abortion for women’s autonomy and liberation.

The apologetic position that looks to exemptions for extreme scenarios as the first line of defense in protecting abortion rights is a defeatist strategy that devalues standing up for abortion–for any reason and at any point–as an important part of reproductive healthcare, no apologies or stigma attached.

For too long we have relied on professionalized reproductive rights organizations, polished PR campaigns, and polling research to back up tepid political responses to abortion restrictions piling up over the years. We have relied too heavily on a reformist mindset that continues to allow those in power to dictate who is able to access abortion care and under what circumstances. This attitude is baked into the very laws that protect our right to abortion, including Roe v. Wade, which bases the argument for legalized abortion on a patient’s right to privacy, rather than a demand for liberation. Appealing for rights on the basis of privacy assumes that abortion is something shameful to be hidden from view, rather than a political demand for the ability to control our own reproduction. The restrictive notion of privacy stands on shaky constitutional ground and is not the politically robust foundation we need to build our expansive demands for full reproductive justice.

Where do we go from here?

What we need now is a fighting movement for reproductive rights and justice, one that rejects an overreliance on politicians, Supreme Court justices and mainstream reproductive rights organizations to defend what little we have left, and rather builds coalitions with everyone who has a stake in securing reproductive freedom that expands our horizons of what we can win.

This movement can connect with other movements for Medicare for All, for paid parental leave, for affordable housing, for an end to police violence and mass incarceration, for higher wages and safer working conditions, and for the abolition of ICE and immigrant detention centers.

We can draw inspiration from the women’s liberation movement, which used speak-outs, protests, direct action, and civil disobedience to demand full reproductive freedom. It was this militancy and grassroots organizing—the willingness to oppose both those in power looking to control our reproduction and those arguing for a slower, more limited approach to gaining abortion rights—that won us those rights in the first place.

Anne is a member of NYC For Abortion Rights and NYC DSA Socialist Feminist Working Group.