Abortion Rights in Argentina: A Grassroots Fight in the Streets

The vote in Argentina’s national congress tonight will decide the question of the legality of abortion in the country. Due to significant public pressure from mass mobilizations in the streets, the politicians may find their hands are forced and vote to make abortion legal. This movement provides an important model for the international left. 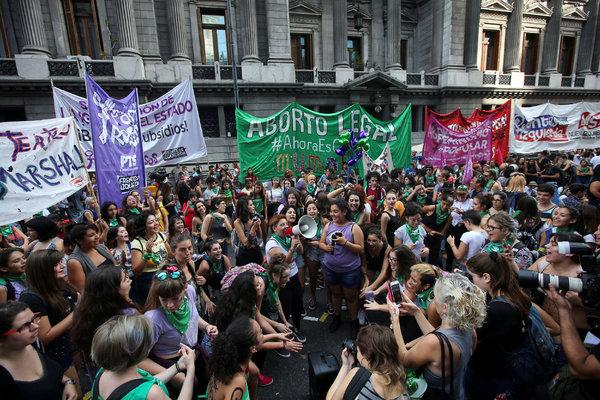 Photo Credit: Agustin Marcarian/Reuters
Over the past 13 years, six bills to legalize abortion have been presented to the Argentine Congress. None have even been debated in Congress, despite the eight years that Argentina was governed by a “progressive” woman president: Cristina Kirchner.

The push for the most recent law began in 2015 when women’s rights groups across Argentina began mobilizing for feminist causes like Ni Una Menos (“Not One Less,”), a women’s rights group. It organized an unprecedented number of mass demonstrations against femicide, including the numerous deaths of women through illegal and clandestine abortions. In June, women organized a massive mobilization of 800,000 people in front of the national congress building in Buenos Aires. As a result of these mobilizations, the right to an abortion passed in the lower house of Congress. Today, the Senate will vote.

Abortion has been criminalized in Argentina since the late 1800s. Since 1922, abortions to protect a woman’s health have been permitted; they are also legal in cases of rape and mental disability. During the 1976-1987 military dictatorship, even these limited rights to abortion were rescinded, effectively denying abortion to almost all women. During this period, over 30,000 people were disappeared, including pregnant women, whose babies were often given to their torturers. Although abortion is punishable by prison, an estimated 500,000 abortions occur every year in Argentina, ending 40 percent of all pregnancies. Unsafe abortions are the leading cause of death for pregnant women in Argentina.

The proposed law, which would legalize abortions up to 14 weeks, narrowly passed in Congress in June. The likelihood of its passage is the Senate is uncertain, and the pro-legalization side is at a slight disadvantage. Currently, 31 senators are pledging to vote in favor and 37 against, with 2 undecided, 1 abstention and 1 absentee.

Win or lose, the struggle for abortion rights in Argentina provides a model for organizing against current and future threats to abortion everywhere. Just as they did in June, activists have held demonstrations across Argentina, and have been joined by demonstrators worldwide, all displaying the green green scarves that have become a symbol of abortion rights across Latin America. It is becoming increasingly clear: we win our rights in the streets.

The fight in Argentina has ignited movements in other Latin American countries, where the Catholic church’s influence looms large; currently only Cuba, Uruguay, Puerto Rico, Guyana, French Guiana and Mexico City have decriminalized abortion. Across Latin America, marches in solidarity with the fight for abortion in Argentina have been organized in countries such as Brazil, Peru, Bolivia, Uruguay, México, Costa Rica, Colombia and Chile. However, the right wing has organized as well. In July, three Chilean women were stabbed by right-wing activists during a reproductive rights rally in Santiago. In Buenos Aires, anti-abortion activists have also organized mobilizations.

Today’s vote is a pivotal moment; will Argentina follow in the footsteps of Ireland and legalize abortion? Will the Senate listen to the hundreds of thousands of people in the streets? August 8 will be consequential in the struggle for liberation. The ‘green tide’ is enveloping Latin America, as women chant, “the patriarchy will fall!”

In the U.S., the Argentinian fight is also a model for mass mobilizations at the state and local level. Since Roe v. Wade was handed down in 1973, abortion rights have been under steady attack. With the likely confirmation of Brett Kavanaugh, who has a long-running anti-abortion record and just last year voted to deny an undocumented teen in a detention facility access to an abortion, Roe v. Wade is in danger of being overturned.

Four U.S. states have abortion bans, known as “trigger bans”, already on the books; these would go into effect immediately if Roe is overturned. 21 states have restrictive abortion laws, many of which are currently being challenged. Mississippi’s 15-week ban is being challenged by the Center for Reproductive Rights, and Iowa’s six-week ban is being challenged in state court by Planned Parenthood and the ACLU of Iowa. Just last week, a federal appeals court blocked an Indiana law placing pre-viability restrictions on selective abortions being sought on the basis of gender, sex, or ability. In the next two years, challenges to these laws are likely to reach the Supreme Court, and the Center for Reproductive Rights estimates that anywhere between 22 and 24 states could ban or further restrict abortion. There is also a threat at the national level.

Even if Roe is not overturned, restrictions to access in states like Texas and Mississippi have made it nearly impossible to get abortions without great expense and the ability to travel. 27 states impose restrictive waiting periods, and 34 require counseling. Abortion access restrictions disproportionately affect working-class women and women of color who may not have transportation and time off work to deal with wait periods or to travel to get an abortion.

Until now, most abortion rights groups have focused on winning in the courts, appealing to what is left of the original Roe decision. They appeal to people to vote for the “good” politicians who will protect our right to choose. Yet despite recent wins, like the striking down of Texas abortion-access limitations, abortion rights continue to dwindle.

Argentina’s movement and the wave of demonstrations across Latin America have demonstrated that mass mobilizations and the pressure they exert can be effective at forcing the hands of politicians. Ni Una Menos has said that their goal is not just to legalize abortion but to ignite a feminist movement around autonomy and self-determination for women. Socialist-feminist group Pan y Rosas takes this strategy one step further, instituting work stoppages in women lead industries and integrating the fight for abortion to the fight against capitalism. “They may vote in Congress, but we win in the streets,” says Andrea D’Atri, founder of Pan y Rosas.

Abortion limits exploit the disadvantages of the working class by making abortion costly and inaccessible. Challenging and winning abortion rights in the U.S. requires mass mobilization, solidarity with the movement around the world, and a commitment to ending all forms of oppression against women, including capitalism. 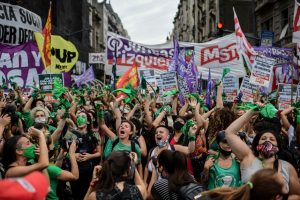 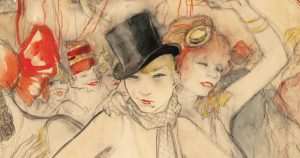 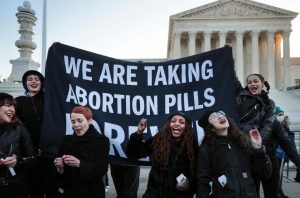