Across the World, Millions Take To the Street on International Women’s Day

Against war, femicide, and gender-based violence, and for the right to live freely and with dignity, millions took to the streets across the world to commemorate International Women’s Day. 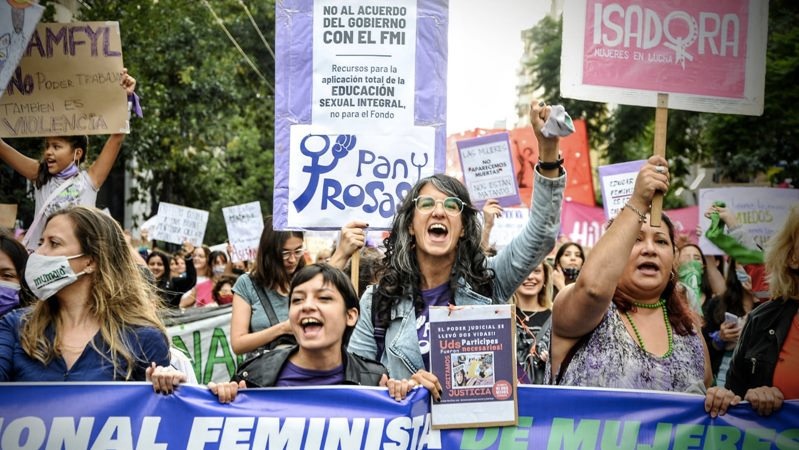 This March 8, millions mobilized across the world. In Europe, anti-war slogans took center stage. In several Latin American countries, the legalization of abortion a central demand. In Argentina, feminists also raised slogans against the government’s pact with the IMF.

Below, we present a snapshot of some of the key demonstrations for International Women’s Day from across the world.

In the city of Buenos Aires, over 60,000 women, young people, workers, unemployed, queer people, and some men filled the square near the Congress where governors were meeting to express agreement with the national government’s pact with the IMF.

This meant that there was not a united call: while on one side of the square, tens of thousands had congregated to denounce the IMF pact, on the other side, pro-government organizations demanded that “the debt [be] paid by the rich and by those who fled” — a way for the government of Alberto Fernández to evade responsibility for deciding to pay the fraudulent, illegal, and illegitimate debt assumed by the former government of Mauricio Macri. The deal includes austerity, tariff hikes, inflation, and co-government with the IMF for the next few years.

More than 100,000 people took to the streets in Mexico City. Their main banners demanded safe, free, and legal abortion and an end to femicides and other forms of intolerable violence. Despite the huge police operation deployed by President López Obrador, the women’s movement took to the streets with its plethora of slogans, colors, and rage that shone in the sun.

Thousands took to the streets across France on Tuesday. In the context of open war in Ukraine where civilians are being bombed and killed by the Russian army on Putin’s orders, an arms race on the side of NATO, and the intensification of economic sanctions against the Russian people, Du Pain et des Roses (Bread and Roses), the feminist collective of Révolution Permanente, demonstrated under the slogan “No Putin, no NATO” and against the war.

Across Germany, workers marked International Women’s Day with strikes. Thousands of childcare workers went on strike on March 8, as did workers at six Amazon warehouses. In Berlin, there were over half a dozen protests across the city.

In these protests, our comrades with Klasse Gegen Klasse took to the streets, with a political profile against the war and rearmament, especially given Germany’s military aid and support to Ukraine, and its role in NATO. They also showed solidarity with the unemployed in social and educational services, and raised slogans for a system where health and life are put over profit.

In Barcelona, picket lines were set up against the proposed labor reforms, the immigration laws, and against the war. In other cities of the Spanish state, protesters also called to mobilize against the war, raising slogans demanding Russian troops in Ukraine, against NATO, and its imperialist rearmament. Protesters also raised slogans against the extreme right and its homophobia, transphobia, and macho violence. Comrades with the Pan y Rosas also called for an anti-capitalist and working-class feminism.

In Istanbul, the Governor’s office had announced on Monday that it wouldn’t allow marches and demonstrations in the city, especially around Taksim Square. Yet, thousands of feminists boldly defied the orders, and gathered at the square to mark the day.

The demonstrations were marked by heavy police violence, as Turkish riot police fired pepper spray to disperse the crowds. Yet, against this repression, the protesters carried on, setting off flares, and chanting, “we are not scared, we do not bow down.”

In Pakistan, thousands gathered in the city of Lahore to mark International Women’s Day despite efforts to stop these protests, and threats of violence and conservative backlash. Demonstrators marched raising slogans against the patriarchy and demanding respect for women.

In Caracas, the mobilizations demanded an end to precariousness and misery, sexist violence, and femicides, and demanded the legalization of abortion.

Simultaneous actions were held in Parque Carabobo and in Plaza el Venezolano, two central squares, before they both converged in a women’s assembly in Parque Carabobo, marking the demands for wages equal to the minimum wage and against labor precariousness; against femicides, transfemicides, and patriarchal violence; and for the right to free, safe, and legalabortion.

Demonstrations took place across Chile, from Arica in the north to Temuco in the south. Pan y Rosas mobilized, raising the need to be in the streets and organized to win our rights. In the capital city of Santiago, the organization led an internationalist and anti-imperialist bloc against the war in Ukraine and NATO’s military intervention in Eastern Europe.