Activism in Baltimore in conversation with MadyGraf Workers

The workers of the MadyGraf factory recently gave a live video presentation for the public at Red Emma’s Coffee Shop. During the event, a fruitful exchange took place between the Buenos Aires-based workers and the Baltimore audience. 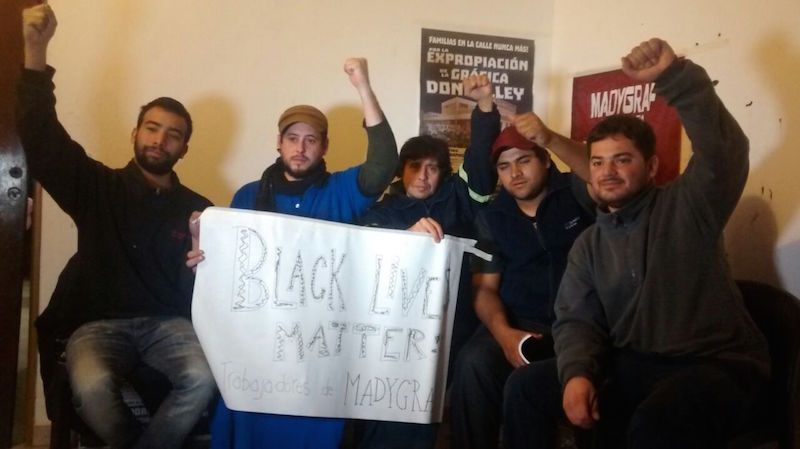 Last Friday, Red Emma’s hosted a video call – projected on a large screen – with the workers of MadyGraf, a worker-managed printing company in Argentina. Some 40 people attended the event, among whom were left political party members, union organizers and community leaders. The event began with an account of the workers’ takeover of the MadyGraf plant on August 11, 2014, and the start of production under worker control. (For more information on the workers’ incredible struggle against multinational corporation, RR Donnelley, click here, here and here.)

During the talk, the workers stressed the importance of the programmatic demands/program adopted from the revolutionary organization, PTS (Partido de los Trabajadores Socialistas), in undertaking their incredible path and attaining their victories thus far. Several of the workers have decided to run in the upcoming local and national elections on the PTS-FIT ticket.

With the smoke of the Baltimore rebellion still rising, a black youth from the audience pointedly asked MadGraf workers about their experiences of police repression. The workers gave accounts of the many marches, roadblocks and protests in which they were attacked by the police or other state forces. They described the Lear workers’ struggle, when workers and supporters were violently repressed, time and again; Madygraf workers were frequently among the injured. They showed no trust in state forces and described their own “security team,” which plays a role both during demonstrations as well as for broader protection of the factory against eviction, a constant threat.

The workers emphasized the women’s commission was one of the key determinants in their struggle and achievements; the impact of the women’s courage, support and political activity went beyond MadyGraf’s doors, organizing workers and their families in other factories as well.