A Detroit coalition of social justice organizations and public defender NGOs has exposed a police policy that has resulted in thousands of arrests and felony charges against people who’ve committed no crimes and pose no threat to anyone. 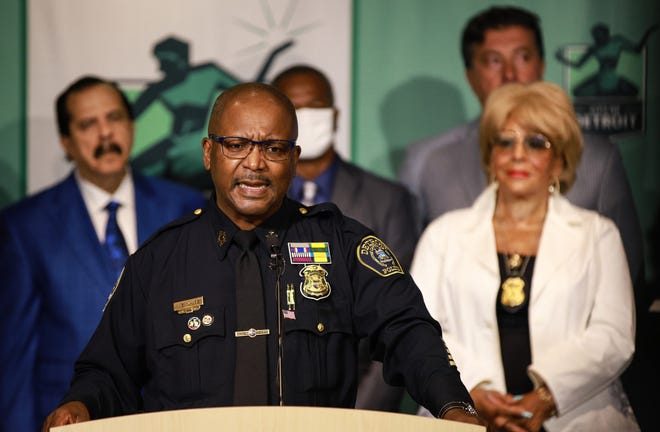 A Detroit coalition of social justice organizations and public defender NGOS has exposed data that show that Detroit police have been arresting thousands of people and charging them with felonies despite the fact that none of them have committed crimes or pose any sort of threat. The coalition held a press conference on January 12 to discuss this alarming practice, which began during the pandemic with an increase in nonviolent gun charges.

The coalition includes Neighborhood Defenders Services, one of the largest public defender organizations in Wayne County; Michigan Liberation, an abolitionist organization; and Detroit Will Breathe (DWB), a grassroots organization formed during the city’s 2020 Black Lives Matter protests, among others.

The data show that concealed weapons-related arrests in Detroit have risen significantly during the pandemic. Before the pandemic, these arrests accounted for 5 percent of all cases tried in Detroit courts, but since then the number has increased to about 30 percent of all cases tried in Wayne County. In some areas of the city, this represents a 50 percent increase in arrests — and as high as a 200 percent increase — stemming largely from random “traffic stops.” The Detroit policy thus mimics the infamous “stop and frisk” program in New York City, a highly controversial program that was widely condemned by civil rights and civil liberties organizations as a racist and undemocratic overreach by the police.

What is worse is that the Detroit policy almost exclusively targets Black people. Some 32 of 33 people — 97 percent! — charged with nonviolent concealed weapons violations have been Black. Detroit’s population is roughly 85 percent Black. In fact, non-Black people saw a slight decrease in these kinds of charges during the same time period. This is made all the more outrageous when you consider the fact that James Craig, the former Detroit police chief, began his tenure by advising people to get guns to protect themselves.

The timing of this increase in concealed weapons arrests would seem to be connected most recently to the Trump administration, but they actually represent a general tendency with a much longer historical tradition among the police, and have always had the blessings of both Republicans and Democrats. These politicians use Black people as the scapegoat for the social decay produced by capitalism’s neoliberal policies and the relentless drive for profits.

According to the Pew Research Center, the violent crime rate in the United States fell by 49 percent between 1993 and 2019. Gun violence and homicide, however, have increased during the pandemic. While liberal politicians like former New York City mayor Michael Bloomberg and his “Mayors Against Guns” coalition acknowledge the ways in which the pandemic has had a disproportionate impact on Black people, they fail to support increases to social services or anything that would genuinely reverse the structural neglect communities of color have faced over the decades. These are the same politicians who have increased police funding and discretion, privatized public resources such as schools and water systems, and rejected demands for universal healthcare, free university tuition, and so on.

Neither the Democrats or Republicans are willing to make the investments necessary to combat social and economic inequality. Instead, they utilize the police and stop and frisk-like policies like those employed in Detroit to create a façade that they are addressing the issue of gun violence — when they are not. The Detroit Police Department (DPD) has failed to provide any evidence that the majority of arrests they’ve made and guns they’ve confiscated have any connections to any crimes.

Of course, we must not overlook that the focus on gun violence, which is a national conversation, is also a way for the DPD and other police departments across the country to regain the “legitimacy” they’ve lost as a consequence of the movement against police brutality and systemic inequality.

Meanwhile, there is no similar policy for white people, who are also part of the overall increase in gun violence in the United States since the pandemic. Although white men are the number-one perpetrators of mass shootings, it’s almost impossible to imagine the cops having something like Operation Legend — the program Trump launched in 2020 to burnish his “law and order” reputation — that would involve randomly pulling over white men to check whether they are carrying their guns “properly.” Members of a far right-wing militia in Michigan were arrested by the federal government for conspiring to kidnap the governor of Michigan, yet white people in the state — even those living in Detroit — have never had to deal with increased policing to make sure they are adhering to the concealed weapons law.

For Detroit Will Breathe, these arrests expose the true nature of the police as an institution whose main purpose is to inflict harm and enforce inequality. The cops are not here to protect us or even address crime, but to carry out the scapegoating practices of this racist capitalist system that is based on the exploitation of the working class and the oppressed.

DWB is building a grassroots campaign to stop these racist stop and frisk policies in Detroit, and demands that all concealed weapons charges be dropped. It seeks to resuscitate the power of the movement that was co-opted by the Democratic Party and has since then become demoralized by the failure of the Biden administration to deliver anything meaningful. We want to make clear not only that our power is in the streets, but also use this campaign as a way of doing political education about the true nature of the police, why it is an institution that cannot be reformed, and why we cannot rely on the Democrats or Republicans to give us justice.

DWB does not believe that a successful campaign to stop these racist CCW arrests can simply be a local one, especially because similar harassment and arrests are likely taking place in other parts of the country. That’s why we encourage people across the country to help us with our campaign and to think about ways of building similar campaigns. Together, let’s build campaigns that can organize people to re-engage with the struggle against racism and systemic inequality, and that engage politically with wider sectors of the population around the true nature of the police and why the cops, along with the institutions of capitalism they uphold, must be abolished.

To get involved with the campaign, get in touch with Detroit Will Breathe