ADOS, or American Descendants of Slavery, is an organization that differentiates itself from non-American Black people, including more recent immigrants who have suffered and resisted for generations. ADOS is co-opting the demand for reparations and making it serve the very systems we should fight against. 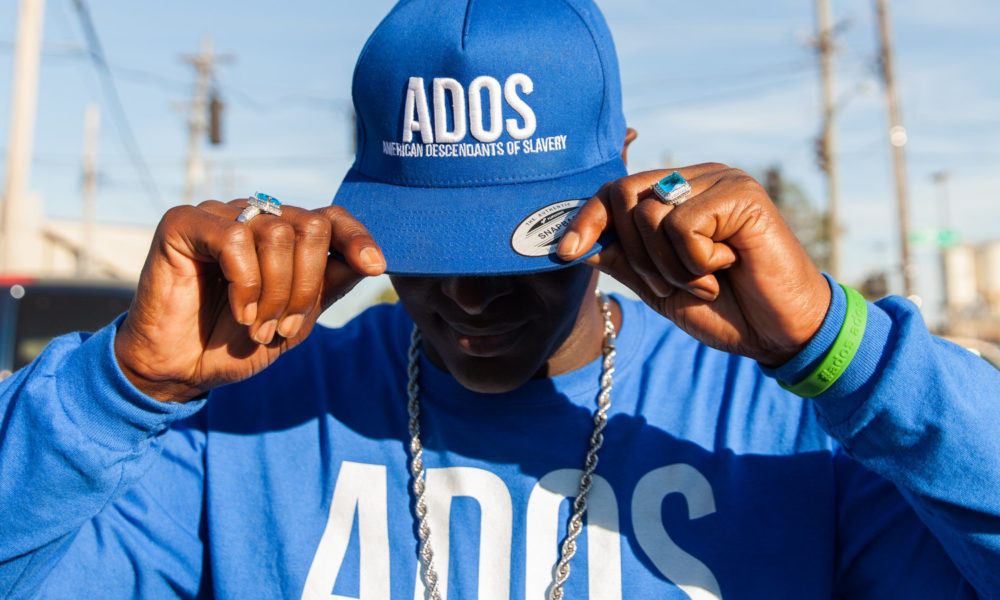 In “Mama’s Baby Papa’s Maybe,” a piece exploring the traumatic legacy of slavery and sexual violence on Black family structures, Hortense Spillers describes the Middle Passage as the site of a “rupture” in identity, culture, and physical flesh. Kidnapped Black people were forcibly transitioned from various tribal and national African identities to “American.” They had their languages, traditions, and even humanity denied to them in the name of white supremacy. And those were just the effects on the survivors; many people did not live through the Middle Passage.

Although the forms of exploitation have shifted over time (from slavery to “separate but equal” to the prison industrial complex), the U.S. has denied its own legacy by refusing to compensate Black Americans for the wealth generated through plantation-based capitalism. Legislation around reparations had remained stalled for decades, until it reentered the national conversation around 2014. Over the course of the 2020 Democratic primaries, more Democratic candidates have voiced support for them in some form than ever in recent history.

But reparations, although a sign of long overdue acknowledgement, are a Band-aid for a bullet wound. They do not create systemic or structural change. Economic reimbursement cannot solve capitalist white supremacy, or rewrite history, no matter how broad its scope — and scope is at issue as well. Who will have the authority define what and how much Black people deserve?

Having conversations around reparations is a good first step, but it won’t take us all the way. To create change the change we need, Black Americans must build solidarity with other working class groups both inside and outside of the diaspora. Only the overthrow of capitalism, the system that colonized and enslaved us in the first place, can lead to Black liberation. White supremacy is a global force, and it requires a global network of resistance to dismantle.

However,within the Black diaspora, the issue of reparations and identity has birthed a new form of Black nationalist politics that threaten the possibility of such solidarity.

ADOS, or American Descendants of Slavery, is a group founded by Yvette Carnell and Antonio Moore that is ”in favor of reparations for the descendents of slaves who were held in captivity in the United States, affirmative action for slavery descendants, and government subsidy of education and health care.” Their strategy involves differentiating themselves from non-American Black people, including more recent immigrants who have suffered and resisted alongside us for generations. For them, reparations are based on a specific kind of American identity, and ”Black immigrants should be barred from accessing affirmative action and other set asides intended for ADOS, as should Asians, Latinos, white women, and other ‘minority’ groups.” While addressing the issues Black Americans face in their specificity is important, doing so by scapegoating other marginalized groups and aligning with white supremacists is a misstep.

According to Media Matters, co-founder of ADOS Yvette Carnell is a board member for Progressives for Immigration Reform, which has been identified by the SPLC as a front for the far-right group Federation for American Immigration Reform (FAIR). FAIR has supported Trump’s border wall, mass deportations, concentration camps, and other violent and racist policies. Carnell, by associating with white supremacist groups, is pushing for material gains for Black Americans by targeting undocumented people.

Before ADOS was a movement, it was a hashtag. Combined, Carnell and Moore have 30,000 followers on Twitter and over 114,000 subscribers on Youtube. On social media sites and online spaces dedicated for intra-community discussions among Black people, like Black Twitter and Lipstick Alley, ADOS is a frequent topic of conversation. People argue that no one has ever cared for or fought for Black Americans, pointing to the anti-Blackness of Black immigrants and other people of color.

A Black version of right wing talking points is reiterated — immigrants are coming to the US and benefitting from the work and advocacy of Black Americans, stealing jobs, and attacking members of the Black community. ADOS plays up these anxieties and presents xenophobia as the solution. To an extent, pointing out a lack of cross-ethnic solidarity is a fair point; however, there is also a rich history of building political coalitions between different groups. For example, Asian Americans fought beside Black Panthers during the Civil Rights Movement under the motto “Yellow Peril supports Black Power.” More recently, New York groups like Mi Casa No Es Su Casa, Comité Boricua En La Diáspora, and South Asia Solidarity Initiative, among others, have mobilized with the Black community during recent protests against police harassment on subways.

Tiffanie Drayton writes that “On its surface, ADOS should be a strategic challenge to white supremacy. But what it’s so far more successful at is creating in-fighting among the Black community.” They exploit long-standing tensions within the Black diaspora, like differences in education and average salaries. A Pew Research poll found that U.S.-born Black people earned $10,000 less on average than Black immigrants ($33,500 to $43,800). There are many possible explanations for these differences, like which Black immigrants have the money to immigrate in the first place. ADOS exploits these intra-diasporic tensions and turns the focus against Black immigrants, rather than white people in the U.S. who make well above what either group does.

In the U.S., Black nationalist movements have a history that offers as much hope as it does lessons learned. In the early and mid-1900s, Black nationalism was constituted as a rejection of American white nationalism. Black people had been terrorized and murdered to control the population and make them more easily exploitable. In response, “Black nationalists council separation as an anti-racist practice and a method of empowerment in the absense of alternative avenues of power.” White culture reviled Black people, but it also relied on them for labor. Reclaiming their production, and pushing for Black communities to become self-sufficient outside of white capitalist centers, was a powerful act.

This Black nationalist movement for cultural, physical, and economic independence from the forces of white supremacy wasn’t without its faults. Black nationalism struggled to deal with it’s own internal patriarchy, disempowering Black women from leadership positions and often framing them as property that Black men needed to reclaim from white men. Black LGBT organizers like Bayard Rustin were excluded from the movements of the 60’s, and their contributions minimized.

Garret Felber argues that Black nationalist politics developed as a way to explore new cultural and political possibilities for the Black community outside of white supremacy. The separatism advocated for by these groups was directed towards “self-determination, community control, and new relationships to self and one another.” Black people worked to disentangle themselves from white supremacy and resist in ways that celebrated Blackness and autonomy.

At this time, there were significant movements towards building solidarity with other groups, like the connection between the Black Power and Yellow Peril movements, and the Rainbow Coalition, made of Black Panthers, the Young Lords, a group advocating for Puerto Rican people, and the Young Patriots, founded for working class white youth.

The building of multi-ethnic coalitions, especially between different people of color, was part of the reason the U.S. government cracked down so violently on Black nationalist movements. Black Americans on their own were threatening enough, but the possibility that their resistance could grow even more and build power with other groups was unacceptable.

However, nationalism as an ideology is incompatible with revolutionary politics, because ending white supremacy and capitalism are necessarily tied to ending nations themselves. And without coalition-building, Black nationalism can become a movement that elevates the issues of a particular group above others, to the detriment of both. In early phases, this was elevating cis straight Black men over other Black people; now it’s elevating only Black people with a particular colonial lineage over those who come from different backgrounds.

Black nationalist politics play a rich and complex role in the history of Black resistance, but they can also be co-opted to serve the very systems they fight against. ADOS finds common ground with white supremacists groups on the issue of immigration and legitimates them through this. It allows organizers to strengthen those of the “in-group” and isolates others, including potential allies. The overthrow of capitalism and advent of more radical leftist systems will not occur through the privileging of particular marginalized groups or the strengthening of any state.

Nationalism is not a politics of liberation

Nationalism is not a politics of liberation. Rather than building power through the solidarity of different groups, it divides the marginalized and shifts our focus to reactionary infighting, rather than confronting white supremacy and racial capitalism head-on.

The history of African Americans in this country is specific; these institutions were built on the backs of our ancestors, and our blood will be in this soil for centuries, but we aren’t the only ones with a bone to pick. Indigenous people and the Central Americans who lived here before colonialism ought to have a say in things, as well as immigrants pushed to the U.S. because of destabilization and violent regime changes funded by the U.S.

Three of my grandparents are descended from enslaved people in North Carolina and Georgia, but the fourth was a German immigrant — am I only entitled to 3/4ths of reparations? How does that math change when you consider the mass rape of Black women during slavery? My family tells a story of a Dunn in North Carolina who was assaulted by slave owners and had a half white child, our first recorded ancestor. Does this mixture bring the percentage of myself that is entitled to reparations further down — 3/4ths to 3/5ths?

Black American identity is full of stories like mine, with complicated and violent family lineage in the U.S. as well as in our immigrant ancestry. To reduce this to a binary of being an American descendent of slaves or “other” limits our understanding of the past and the possibility of other futures.

Black American history has plenty of instances of cross-diasporic leaders and cultures, like Audre Lorde, whose parents were Caribbean immigrants, and labor leader Lucy Parsons, of ambiguous Black ancestry. There is more potential in recognizing these parallel histories of genocide, colonialism, and resistance in other diasporic people than in closing ourselves off and engaging in our own version of white supremacist blood politics.