U.S. embassy employees at the U.S. air base in Doha, have denounced the unsanitary, overcrowded, and inhumane conditions in which Afghan refugees are being held. Such circumstances are the direct product of the destructive two-decades long U.S. occupation of Afghanistan. 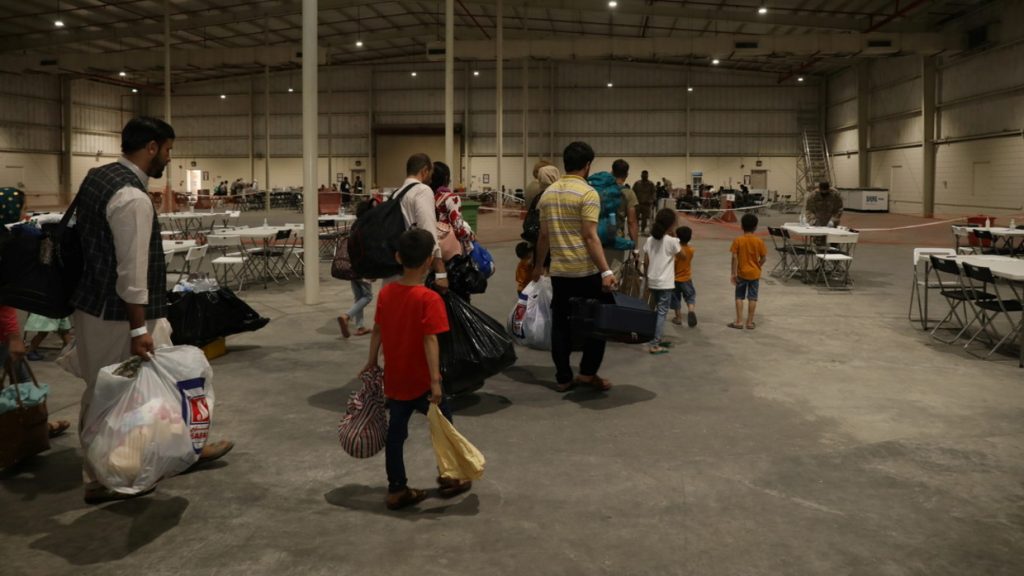 The United States has reported that more than 30,000 people have already been evacuated from Afghanistan since August 14, when Taliban forces took the country’s capital Kabul and nearly completed their seizure of the entire country. As a leaked Pentagon email reveals, many of these refugees are now being forced to wait in inhumane conditions in Qatar.

After 20 years of occupying Afghanistan, U.S. imperialism, in collaboration with the puppet Afghan government, has only made the economic and political situation in the country worse. Now Afghans, especially women, who vividly remember the brutality and oppression of the Taliban, are afraid of the Taliban’s return to power, and tens of thousands of Afghans are fleeing the country, even as thousands of others remain stranded at Kabul’s airport.

Since August 14, Biden has been trying to accelerate the withdrawal of U.S. troops that began under the previous administration. However, in just a few short days the Taliban complicated U.S. imperialism’s attempts at a withdrawal by launching an offensive which led to a rapid takeover of the country.  In the midst of this offensive, thousands of Afghans desperately tried to flee Afghanistan for fear of retaliation at the hands of the new regime. The vivid scenes of Afghans desperately climbing onto the wings and fuselage of U.S. military aircraft in order to escape, capture well the economic and political turmoil caused by the U.S. occupation. Indeed, the two-decade occupation of Afghanistan is one of the biggest military and political failures in U.S. history, and demonstrates the relative decline  of its imperialist hegemony.

You might be interested in: Afghanistan. Desperation and Death in the Kabul Airport Before the Taliban Advance

Now, these refugees, which are being displaced due to the interventions of  U.S. imperialism, are facing further humiliation at the hands of the U.S. military, which is keeping them in dangerous and unsanitary conditions.  According to embassy personnel and several media outlets, including the Middle East Eye and Al-Jazeera, an e-mail sent from the Al-Udeid air base addressed to the Pentagon and leaked to the press provides an account of the awful conditions Afghans are subjected to at a military base in Qatar.

It was Al-Jazeera, in fact, who published the first low resolution photos sent by the refugees: hundreds of Afghans gathered in unsanitary conditions in a hangar. As Qatari media reported: that “The refugees are kept in high heat without air conditioning, with several people fainting while waiting in long queues to use the toilet or to get food and water.” Most had no clothes other than what they were wearing and did not know what their final destination would be.

Meanwhile, even staff at the U.S. embassy in Doha denounced the conditions, saying, “Today is a rainy day. The place where the Afghans are living is hell. The floor is covered with debris, urine, feces, spills and vomit.”

If providing “humanitarian aid” means subjecting refugees to horrific conditions and imposing refugee caps, then it’s clear that U.S. imperialism is not interested in offering solutions to the humanitarian crisis it helped to create. The fight for open borders for anyone in need of refuge under dignified conditions must be a struggle taken up by workers and oppressed around the world in the face of the dire refugee crisis in Afghanistan.

This article is based on one originally published in La Izquierda Diario on August 25, 2021