AFL-CIO Endorses Medicare for All… Well, Not Really

The AFL-CIO celebrated its 28th National Convention in St. Louis, Missouri and passed several resolutions on workers’ rights, the threat of fascism, and labor’s electoral strategy. 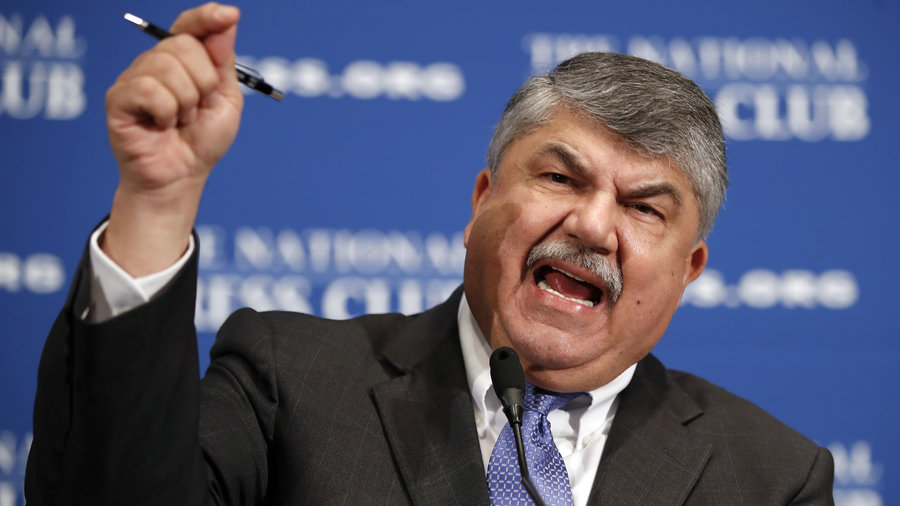 As a symptom of the changing political situation, the labor federation passed a slew of resolutions that, if one were not paying close enough attention, would seem to signal a leftward shift from the AFL-CIO’s traditional business unionism.

Among the more remarkable resolutions passed was the formal support towards a Medicare for All health policy.

“Our longstanding goal for achieving this is to move expeditiously toward a single-payer system, like Medicare for All, that provides universal coverage using a social insurance model, while retaining a role for workers’ health plans” [emphasis added].

What does the federation mean by, ‘retaining a role for workers’ health plans’? The statement continues,

“We will support legislation that guarantees health care as a human right through an improved Medicare for All, which we will judge according to our core values. We look forward to working with the sponsors of single-payer plans to ensure the needs and concerns of working people and their unions are met” [emphasis added].

Throughout the statement, every mention of the AFL-CIO’s support for single payer rings hollow as the bulk of the resolution staunchly defends employer-based health insurance.

But in case there were any doubts, the following makes Richard Trumka’s priorities explicit:

“Health benefits earned through work are the primary way Americans get health coverage, with nearly 178 million people enrolled. Preserving this coverage must be a priority, and it is imperative that Congress and President Trump take steps to strengthen it, as well as avoid unnecessary and harmful disruptions of it.”

This politics of defending only the rights of union members leaves out not only all workers who are at this moment – or any moment – unemployed, but also those who are working without health insurance coverage.

Fighting solely for the rights of a minority of workers isn’t new: it’s been a pattern for the AFL-CIO from the age of Samuel Gomper’s “pure and simple unionism.” It is, at the same time, one of the main reasons for labor’s decline over the past four decades.

As opposed to capitalist power, the power of labor resides in the unity of workers and the fight for common demands. The way to achieve unity in the ranks of the working class is by advancing the demands of the most oppressed workers through the uncompromising support from workers who enjoy more benefits or democratic rights.

For example, we need to convince white union workers to fight against racism and police brutality; we need to win US-born or documented workers to the fight for equal rights for immigrants’ rights and citizenship for all people working in the US. Workers in less precarious conditions must fight to bring precarious, contingent workers under the same contract.

Such unity among workers builds solidarity for the rights of all, across jobs and employment status. Oftentimes, developing unity reveals and chips away at the divisions that capital (often successfully) drives to create among workers.

The US health care system, which relies heavily on employer-based plans, widens the gap between workers with benefits and all the rest. That’s why the fight for universal health care is a spear that gets at the heart of this division.

Today, when workers organize on the job, whether for higher pay, better working conditions, or to form a union, they not only risk losing their jobs, but also risk losing health care for themselves and their families. The stakes are too high, and thus the task of rallying people together for a collective fight becomes extremely difficult. The level of coercion that employers exert today through the provision of health care is astounding. As explained in a previous article, winning universal health care would increase workers’ independence and their potential to collectively confront their bosses.

We all know someone who was forced to stay at a job they hated,worked full-time despite competing obligations or pressures, or decided against speaking up for fear of losing their health insurance coverage. Some of us have been there ourselves.

The employer-sponsored health care model is a yoke around labor’s neck. Breaking this system of coercion is a primary task for the labor movement today.

For this reason, the AFL-CIO’s lip service to Medicare for All while defending the exclusionary benefits of a minority of workers is a recipe for defeat.

This game plan upholds and deepens the division between workers that have health benefits and those who don’t.

We have seen that the bureaucratic leadership is not up to the task that is required. If there is any possibility of getting unions to get out and fight for this demand, it will be in response to the pressure of the rank and file.

Unions must use their resources and their mobilizing power to effectively fight for Medicare for All – not as formal support, but as a central demand that will benefit all workers. Labor will emerge from the struggle, stronger.