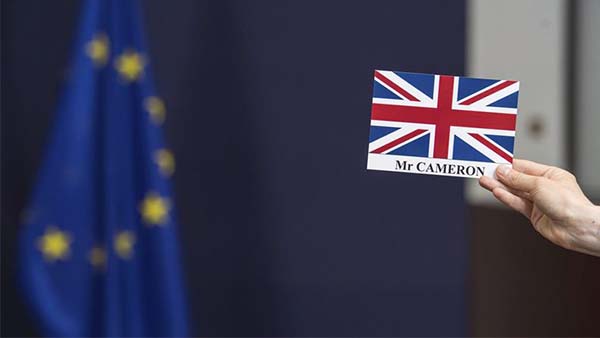 Great Britain is not the great power it once was, neither economically, militarily, nor diplomatically. Even as it figures among the largest economies in the world, it grows weaker and less competitive, burdened with huge commercial deficits. To stay afloat, it largely depends on the real estate bubble, and the obscure, corrupt mechanisms of the City.

While the rating agencies’ decision to remove the United Kingdom’s AAA status after the triumph of “Leave” was to be expected, Standard & Poor’s points to something more worrying: the UK’s debt which will mature over the next 12 months corresponds to 755% of its foreign revenues, and large sums must be rolled over continuously. The highest among 131 states rated by various agencies, this figure is a result of London’s role as an international financial center, and the huge distortion that this causes to its unhealthy economic structure.

With its military might light years behind what it was during World War II, the UK is regarded with disdain by its North American ally, and is incapable of defending even small cities against weakly armed rebels in places like Afghanistan or Iraq. Today the UK would not be able to wage a war like it did only 34 years ago against Argentina over the Falkland Islands. In Syria, despite the heated debate in the British parliament last year about the UK’s military intervention, it´s made no impact since its involvement.

Diplomatically, Britain has been completely marginalized in importance. In the 1980s, Margaret Thatcher managed to play a key role, one repeated as farce years later by Tony Blair. In the Ukraine – the most important conflict in Europe since World War II – Russia did not negotiate with the British, but the United States, Germany and France. During negotiations on the future of Syria, the Russians and Americans do the talking, while China and the German-led EU watch them behind the scenes. When Europe needs to speak with President Erdoğan of Turkey, it is Chancellor Merkel of Germany who gives him a call. Likewise, Great Britain is absent in the growing dispute between the United States and China over the South China Sea.

It is true that Great Britain retains a certain cultural influence and its finance industry is still highly developed. However, due to the progress made in other regions, its clout is shrinking rapidly.

In the eyes of the United States, Great Britain remains useful as a platform for intelligence and propaganda, as well as a reliable echo chamber for its arguments. In the UN Security Council the United States can always depend on the UK’s vote.

Before the outcome of the referendum, some analysts argued that there were strong reasons to believe that Italy is today much more important than Great Britain.Because, not only does Italy still retain a large manufacturing base, but it is also actively involved in diplomacy. Italy’s active diplomatic involvement was illustrated during the Greek crisis last year as well as during negotiations over European sanctions on Russia at the recent forum in St. Petersburg.

The ECB President and EU’s diplomatic chief are both now Italian. Great Britain’s Catherine Ashton played an insignificant role in the latter post. Moreover, as a key member of the euro zone, Italy holds a significant stake in the bloc’s future, whereas the non-member, Great Britain clearly does not. The bloc is the basis of German power.

If this loss in influence was not more apparent, it is only because it was veiled by the UK’s membership in two imperialist institutions: The EU and NATO. Of these two, it is the EU which wields a strong influence over world affairs in many important areas. This can be seen qualitatively in the economic arena. This can also be seen in the diplomatic arena, as in the application of economic sanctions on Iran and more recently on Russia under US pressure. These sanctions had a strong impact on the two countries and are tools of pressure in the hands of the Atlantic alliance.

NATO, on the contrary, is a divided and unreliable player in the military field. In NATO, the United States acts in an increasingly unilateral manner or uses the guise of coalitions of the willing. The war in Afghanistan is the only operation under NATO command.

For some time, Great Britain has been a semi-detached member of the EU in economic policy terms. Yet, at least in theory, it was fully involved in the EU’s foreign policy decision-making and implementation processes through its status as a full member. For instance, in the European Council, the British defended a hard line policy towards Russia, even though the decision on the sanctions was actually negotiated between the United States and Germany. As an actor in the decision-making process, David Cameron could nevertheless claim the authorship of this policy. In leaving the EU, however, the UK will lose this appearance of importance.

Devoid of its veto power at the European Council, Great Britain will not even be able to act as a spoiler the way France and Italy do. These countries could soon become more important than Great Britain in the eyes of the United States. If the ominous possibility of the British ruling class losing any semblance of influence in the Western alliance materializes, even countries such as Russia and China which are not members of this alliance could increasingly surpass the UK. The decline could be even greater in case Scotland leaves the UK, which would increase the latter’s chances of losing its seat in the UN Security Council. In such a case, the only thing left of Great Britain’s pretense as a great power would be its nuclear capabilities.

Whether the process reaches such an extreme or not, it is certain that Great Britain’s loss of influence in the world – already evident before the referendum – will accelerate further to turn into an uprecedented situation for the British political and economic establishment. In the immediate future this could prompt the UK to embrace the United States more strongly out of fear. However, in the longer term, the UK might tend towards strategic options more independent of the United States, as was the case before World War II – although the unravelling of that process had resulted in total dependence on US power.

For the British ruling class, which had enjoyed centuries of global influence, this unprecedented situation could only drastically shake up the foundations of its historical dominance.