After Decades of Struggle in the Streets, Argentina Legalizes Abortion

In a monumental victory for the feminist movement, Argentina has voted to make abortion legal and free during the first 14 weeks of pregnancy. Socialist feminists have been on the frontlines of this struggle from the beginning. 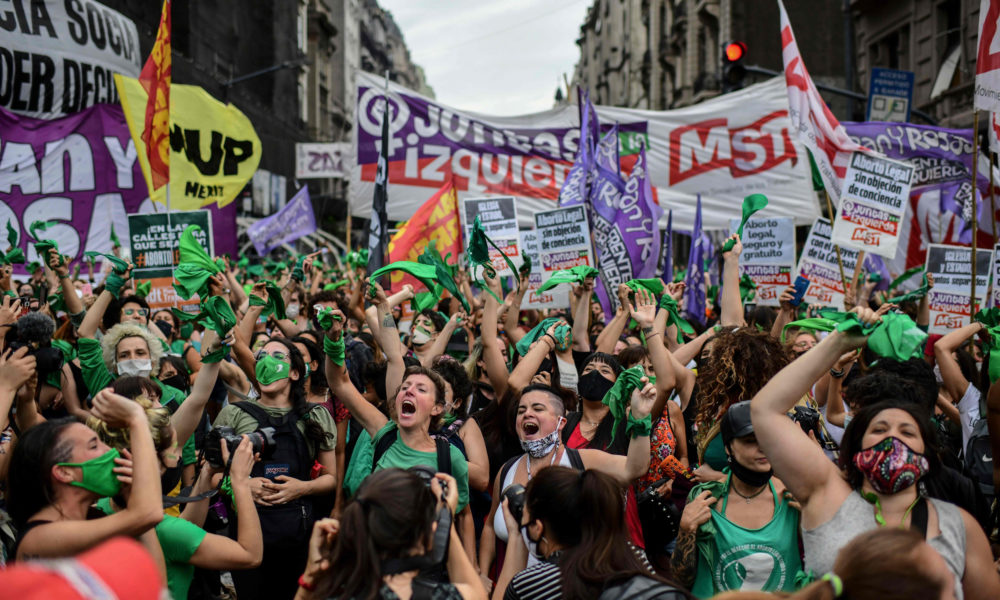 At 4am on Wednesday morning, Argentina finally legalized abortion. An estimated 20,000 people spent the evening in the streets of Buenos Aires, chanting, celebrating, and demanding the favorable vote. And an hour before sunrise, the Senate finally voted: there were 38 votes in favor, 29 against, and 1 abstention.

Argentina is the sixth Latin American country to legalize abortion without restriction during the first 14 weeks of pregnancy. Previously, the procedure was only legalized nationally in Cuba, Uruguay, Guiana, and French Guiana. In Mexico, it is legal in the states of Mexico City and Oaxaca. Abortion is legal in Puerto Rico because of its status as a “associated free state of the U.S.”

This victory is the product of a long battle by the Argentinian feminist movement. In 2018, Argentinians organized massive mobilizations to win this right, and the bill proposed by the National Campaign of Legal, Free and Safe Abortion was approved by the Lower House; however, it was subsequently rejected by the Senate, despite the hundreds of thousands of people protesting in support of the bill in the streets of Buenos Aires and across the country. Now, after decades of struggle, there will no longer be cases such as that of Belén, who was put in jail for homicide after having a miscarriage. There will no longer be hundreds of nameless people who die each year as a result of unsafe and clandestine abortions.

The law will allow free and safe abortions up to the 14 week mark as part of Argentina’s public and private healthcare.

The importance of this victory for the working class and poor across Argentina cannot be overstated. The Argentinian feminist movement has been struggling for reproductive rights for decades. In the past five years, Argentina has arguably built the largest feminist movement in the world — starting with “Ni Una Menos” (Not One Less) in 2015, a massive movement against femicides that brought millions of people to the streets. This feminist movement organized protests of hundreds of thousands of people for the international women’s strike, joining a global feminist movement that orchestrated massive mobilizations around the world. In 2018, this feminist movement took the streets in massive numbers when the right-wing government of Mauricio Macri finally allowed the first bill to legalize abortion to come to the Senate.

This feminist movement is overwhelmingly made up of young people, many of whom are teenagers who refuse to have their futures decided for them and demand control over their own bodies. As part of “Ni Una Menos,” the Women’s Strike, and the 2018 fight for abortion, the feminist movement organized assemblies in every city, in which women crafted demands for the movement and voted on measures to take the fight forward.

You might be interested in: Argentina is on the Brink of Legalizing Abortion: An Interview with Socialist Feminist Andrea D’Atri

And now, this movement has gained a major victory in what is a predominantly Catholic country: the right to an abortion.

Historically, every administration in Argentina has opposed the legalization of abortion, including the current Vice President and former President Cristina Fernández de Kirchner, who was part of the wave of Latin American pink tide governments in the early 2000s. Kirchner and her supporters are part of a strong current in Argentina known as “Peronism” — coming from Juan Perón, whose reign was characterized by some progressive labor legislation and progressive populism as well as strong, bureaucratic control of unions and persecution of the left in the 70s. Peronism has rejected reproductive rights from its very beginning — Perón prohibited the free sale of anti-contraceptive pills in 1974; the neoliberal government of Carlos Menem declared a “Day of the Unborn Child” in 1998 as a clear sign of support for anti-abortion proponents. Menem is now a sitting senator for the Frente de Todos (Front of All), the current governing coalition in Argentina. Despite their progressive veneer, Néstor Kirchner and Cristina Kirchner, who led the country between 2003 and 2015 at the height of the pink tide years with a strong majority in the House, avoided even discussing an abortion bill. Notably, Cristina Kirchner personally spoke out against abortion legalization and would not allow a bill to be voted on at all.

More recently, the right-wing government of Mauricio Macri allowed an abortion rights bill to be debated on the floor of Congress, unleashing a mass movement which forced the lower house of Congress to pass the legislation. The movement forced the hand of many politicians who had traditionally opposed legalization; even Cristina Kirchner — who was a senator at that time — had to vote in favor of the bill. Only the Workers Left Front (FIT-U) voted for legalizing abortion as a bloc. Despite hundreds of thousands of people protesting outside the Congress and around the country, just a few “no” votes by members of the Senate were able to block the right to an abortion. But the movement in the streets never went away. In fact, it was the “marea verde” (the “green wave,” as the pro-choice movement is called because of the green bandanas that supporters wear) that forced then-presidential-candidate Alberto Fernandez to promise to send a new bill to the Congress.

In light of this history, any attempt from the “progressive” government of Alberto Fernández to claim this victory as its own is absolutely contrary to fact. It was the feminist movement that forced the current Pope’s home country to make abortion legal and free. This was remarked upon by Nicolás del Caño, representative of the Left Front:

We know that it will be the representatives who will vote, but this right will be won in the streets, thanks to the decades-long struggle of the feminist movement. From our seats in the Senate we are going to encourage the movement’s strength to express itself again and make abortion legal.

It must be noted that the law currently up for a vote is far from perfect. The bill being presented isn’t the one that the feminist movement wrote and has been advocating for over the past decade. Rather, this is one presented by the Fernández government. This law includes exceptions, not only for individual healthcare providers who do not want to perform abortions, but also for entire hospitals or even whole cities or states who want to “opt out” of offering abortions. This can present a challenge to people seeking abortions in poorer areas where there is insufficient access to public healthcare. These modifications were made by the government of Alberto Fernandez to reconcile with the right-wing opposition (and the right wing of his own Peronist coalition, Frente de Todos) and to prevent a massive reaction from the Catholic Church. Even with these modifications, these same right-wing sectors mobilized and lobbied against the bill with the most misogynistic arguments.

Though the legalization of abortion is undoubtedly the product of a hard-won struggle by Argentina’s feminist movement, it is also clear that the bill is an attempt for the government to retain progressive credibility while at the same time attacking working-class people and especially working-class women in other ways. This is the nature of reform at the hands of capitalist parties — they give with one hand and take with the other. After all, Fernandez’s party ordered the police to spray tear gas at thousands of families in the occupied lands of Guernica just a few weeks ago, brutally evicting them and leaving them homeless. Further, at the same time that the Senate voted on this bill, the House of Representatives voted on brutal pension cuts and an austerity budget crafted by the IMF. Nicolás del Caño noted the timing in a speech on the floor of the lower house of Congress:

It is not by chance that we are having this very important debate [about pension reform] on the same day that the Senate is discussing whether to move forward definitively with the right to safe and free abortion — this law which the feminist movement has been fighting for for so many years. The government is trying to implement this austerity measure at the same time, measures which will adversely affect women — the poorest women — and they are hoping it will go unnoticed.

As the socialist feminist Andrea D’Atri has pointed out, working-class feminism has had and will have a crucial role in the future. Many strikes, as well as the struggle against austerity, the human rights movement, environmental struggle, and the fight against police brutality, have had women on the frontlines. That is the perspective that Pan y Rosas, the largest socialist-feminist organization in Argentina, has held for more than 15 years since its creation.

We fight against capitalism for a society that is free of all exploitation and oppression, but we also need to fight in every struggle that allows us to yank some rights from the capitalist state. We do this so that we can live in better conditions and equality, while still fighting for a better society where true equality has been reached.

This is not a final step for feminists movements or for the Left. Argentina’s economic crisis, exacerbated by the pandemic, will lead to mass poverty for working-class people, especially women, and austerity from the government. Passing this bill, the most basic right to an abortion, should not endear the Fernandez government to activists. If anything, the conclusion is that we can’t trust capitalist politicians, who provide abortion access with one hand and austerity with the other, to give us anything. The conclusion is that the struggle for the Left and for the feminist movement is far from over — it must organize and mobilize for the battles to come.