In Pride month, a homophobe named Omar Mateen walked into the Pulse Night Club in Orlando and committed the deadliest mass shooting in US history. It was an attack against overwhelmingly Black and Latino LGBT people, but the media and bourgeois politicians insist on painting this attack as one of “radical Islam” against the American people. 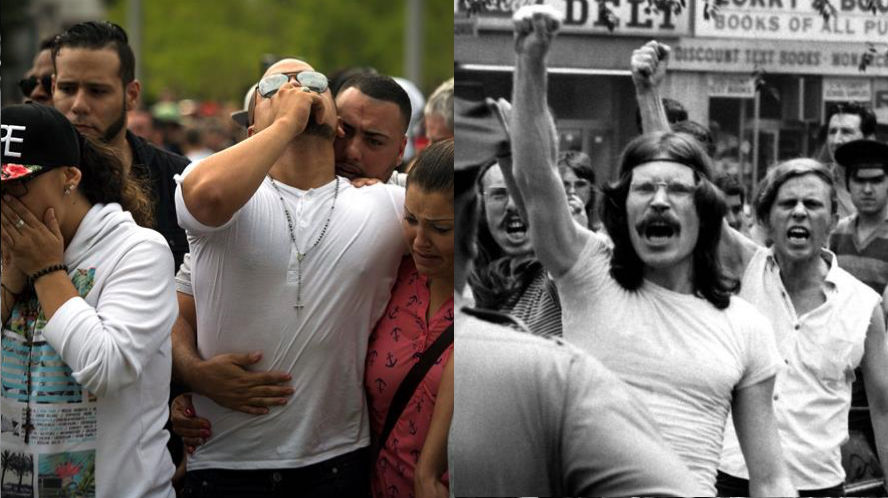 You know all our lives they’ve told us the way we are isn’t right. Well this (bar) is our home. We’re family… So tonight we’re going to celebrate the way we are. It’s not only OK, it’s beautiful.

To understand the massacre at Pulse, the LGBT club in Orlando, we must first understand what clubs mean to the LGBT community. For those of us who do not find a home with our families due to homophobia and transphobia, those of us who cannot feel safe in the streets, the club is our home. A place to feel safe, to feel sexy, to feel free.

The club was the birth of our movement; the place where we stood up to the homophobic and transphobic cops who incarcerated and raped us. The Stonewall riots, which began at the Stonewall bar, led by queer and trans people of color, marked the birth of the LGBT rights movement- a movement against police violence and against homophobia and transphobia.

For LGBT Latinxs, finding a home is even harder in a society that is racist, homophobic and transphobic. How can one feel at home when the countries our families come from are dominated by the Catholic church? A church which convinces our families that we are sick and that loving us means rejecting who we are and who we love. How can we feel at home at gay clubs with white people who treat us as exotic rarities? How can we feel at home in an American society which deports our brothers and sisters, in which a Presidential candidate calls us rapists and criminals? How can we feel at home when LGBT Black and Latino people face so much employment discrimination with high rates of joblessness and precarious, low wage employment? Pulse was having a Latino night- a night that brought Latino queers out for a time to celebrate, to feel at home, to dance to the rhythms that we heard in our homes growing up in the company of other queers.

The shooter’s name was Omar Mateen, a New York-born 29-year old person of Afghan descent who worked as a security guard for the company G4S since 2007. According to FBI officers, Mateen called 911 and claimed allegiance to ISIS. Omar Mateen, who was openly homophobic and had a history of domestic violence, chose Pulse, a Gay Night Club to perpetuate the hate crime. There he shot to death 50 people, severely wounding 53 more. These are facts that point to a clear anti-LGBT motive behind the attack.

The media has struggled to paint this as a terrorist act against American citizens, which will lead to policies and politics like those in the aftermath of 9-11. Trump has used this incident to reiterate his unacceptable Islamophobic policy of banning Muslim people from entering the United States. Aside from stirring up fear and racism in Americans, this proposal serves no purpose in curbing mass shootings, which are nearly always perpetrated by white men and not foreign born “terrorists.” The shooter was born and raised in the United States, a product of the United States’ own virulent militarism, patriarchy and homophobia.

When a Muslim person does perpetrate an act of violence on US soil, the overwhelming majority of Muslims become the victims of violence – verbal attacks at best and physical violence at worst. From individual racists who beat up people who look like they might be Muslim to FBI investigations of Muslims, Islamophobia kills. This horrible act of hatred cannot become an excuse to further oppress Muslim and middle eastern people. It cannot be an excuse for further surveillance and detainment of Muslims, as we saw in the aftermath of 9-11.

We can and we should respond with rage against this horrible act of violence. But that rage cannot be directed at another group that is oppressed by the same government and the same right wing oppressors of LGBT people. We must transform the rage into organization and fight against homophobia, transphobia, racism and the institutions that perpetuate these.

We must fight against the lawmakers who voted against trans people using the restroom because of “public safety” concerns. We can have hate and we can have rage at this policy and the lawmakers who voted for it. We must hate those religious leaders who use their pulpit to preach bigotry, convincing followers that we are unnatural, that we are sick and going to hell. We must hate Trump and his racist rhetoric. We must hate the two-faced hypocrisy of the Democrats who deport our families and our friends, who bomb and murder abroad.

We should also hate all those who stand in the way of refugees entering the country- often Muslim refugees fleeing violence created by ISIS. ISIS – a product of the brutal and unrelenting devastation unleashed by imperialism against the Middle East. We should hate those who leave refugees to drown in the ocean or rot in camps while waiting to find a home. These refugees are denied entry into the US by the same people who wish to deny LGBT people the right to marry, or even to pee in public bathrooms. The same people who deny entry to Latino immigrants.

Our lives matter only in this moment- to fulfill a right wing political agenda to demonize Muslims. Queer lives don’t matter when we are deported or killed by the police. Our lives do not matter when LGBT people make up 40% of homeless youth youth due to the homophobia that pushes us out of our homes.

Obama has called this a terrorist act against American citizens. It’s a cruel joke that when it is politically expedient, Latinos suddenly become political citizens. To the police, to the government, to random racists we will never be Americans, regardless of our citizenship status. Obama is careful not to say that Latinos are in the US for our jobs, lest the anger the Latino voting bloc who sees the Democrats as the “lesser evil.” Yet he has deported more immigrants than any other president in history- deporting many undocumented immigrants seeking refuge from violence in their home countries-violence that is the product of an imperialist foreign policy endorsed and implemented by Democrats and Republicans alike.

The hypocrisy of Obama’s speeches on violence is clear when we examine his foreign policy and the overwhelming number of civilian casualties caused by the drone war . The Republicans and Democrats are united behind this foreign policy of mass killings in the Middle East. They stand on their moral pulpit from atop a mass grave dug by decades of imperialist devastation- from the drones of today to the sanctions of the 90’s, to the proxy wars and coups of the Cold War.

While Obama speaks out in favor of LGBT people on US soil, he hands out millions of dollars in aid to countries such as Saudi Arabia where the punishment for being LGBT is death.

At home, LGBT people have limited recognition and protection if they are citizens. Abroad, their dreams, their bodies, their lives are sacrificed on the mangled alter of US strategic interests.

Even in the US, the state maintains homophobic policies like the FDA policy ban on men who have sex with men from donating blood. There are 53 LGBT people in the hospital in need of blood while LGBT men are banned from donating due to this explicitly homophobic policy. In a wrenching moment of brutal violence against LGBT people, the state which claims to protect us bans even such a basic act of solidarity as giving blood.

2015 was the deadliest year for trans women in the US, and 2016 began with several killings of trans women in one month- overwhelmingly Black trans women. Yet there were no actions taken to address or curb this wave of violence. LGBT people are dying, and our deaths are not reported in the news; they are not mourned or even noticed by politicians. To the government, the lives of LGBT people, especially LGBT people of color, have never mattered.