Statement by the Trotskyist Fraction – Fourth International. For an independent and working class policy. The capitalists must pay for the crisis 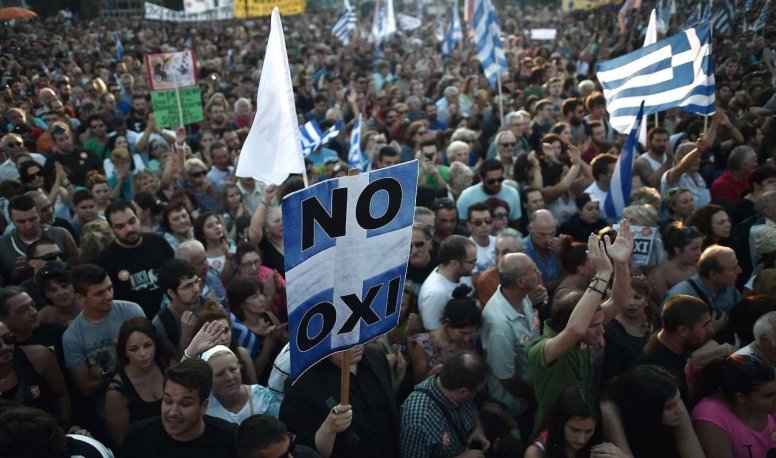 1-The capitulation of the Syriza-Anel government with the adoption of the third memorandum was the culmination of various concessions to the Troika made by Tsipras. The third memorandum is nothing less than a new “colonial pact”; with an increase in taxes on the people, pension reform, privatizations, attacks on labor agreements and new cuts.

Syriza has transformed itself into the implementer of the toughest neoliberal plans against workers and the Greek people. In these elections Syriza will seek to gain legitimacy in order to impose these policies against the workers and the people. It is possible that the results will end in a coalition government as the Troika would like. Its incredible openness towards PASOK in the face of less favorable polling results is a sign of this.

2- This summer in Greece proved the tragic bankruptcy of the “left government” and neo-reformist strategy — defended by most of the European and international left organizations since 2012. The capitulation of Syriza demonstrates the failure of a policy that was seeking to “moderate” the austerity plans with stimulus packages negotiated with “European allies” inside the reactionary institutions of the EU.

3- Popular Unity, the party that was created after the split of Syriza’s Left Platform with other Greek left groups, is questioning the memorandum and the austerity policy, but they share with Syriza a reformist and parliamentary strategy in which the key is winning positions within the capitalist institutions instead of mobilizing workers and the Greek people.

Its strategy of an “orderly exit of the Euro” seeks to rebuild the Greek economy through a return to a national currency in order to generate liquidity and devalue the new currency against the euro to increase competitiveness . This plan is founded on decreasing the purchasing power of the Greek working class, which has already been devastated by years of recession and austerity. The workers must not choose any of these plans, whether austerity or devaluation, that do not question capitalist profits. Popular Unity continues in another way the disastrous strategy of class conciliation which has brought on the catastrophe.

In the case of KKE, which has also been opposed to the third memorandum and is positioned to the left of Syriza, their permanent refusal to develop a united front is an obstacle to the much needed workers’ mobilization against the government plans.

4-In the following months, the next government in power will implement the austerity plans demanded by the Troika. After the lost battle with EU, scepticism and disappointment are strong among the working class and the people; they have lost confidence in a short-term escape from the situation.

Sooner or later, the only possible progressive solution is one led by the mobilization of workers and the masses — building a united front to fight in the streets against austerity measures. The Greek workers demonstrated a tremendous willingness to struggle and resist through the 30 general strikes and hundreds of partial strikes in the public and private sectors during the last years.

However, the trade union leaderships tied to PASOK and New Democracy helped to contain and dissipate this energy. We need to mobilize rank and file organization at workplaces and schools in order to overcome these limits and strengthen the power of the working class with an anticapitalist programme that provides a solution to the crisis.

5-Although we have programmatic and strategic differences with Antarsya — especially because they do not establish clearly a perspective of a workers’ government and the fight for a United Socialist States of Europe against the EU of the capital — we consider that it is progressive that most of the political groups decided to resist Popular Unity and its “anti-euro” class collaboration policy. They did it with an independent position against the reformist options as a left alternative against Syriza, Popular Unity and the KKE. For this reason we call for a vote for Antarsya in these elections.

6- In the previous months, the left of Syriza won a substantial media and parliamentary presence but was unable to mobilize the important social force of the workers who opposed the third memorandum.

It is necessary to defend an anticapitalist programme which includes actions such as rejecting all the memorandums, non-payment of external debt, nationalization of the banks under workers’ control and other emergency actions than can only be imposed through the mobilization of workers and the masses, fighting for a workers government.

With this aim, it is essential to build a working class revolutionary party based on the class struggle which is strongly represented in all major workplaces and among the militant youth.

7-After suffocating the Greek people in order to impose the third memorandum, the European Union continues to show its reactionary face when they give a xenophobic answer to the migration crisis with measures that restrict freedom and strengthen controls on the refugees and undocumented immigrants. Greece is one of the focal points of this migration crisis. Against the rise up of xenophobia and reactionary policies of the European governments, it is necessary to develop a perspective that unifies the fight for the migrant’s and refugee’s rights and the opening of the borders with the fight of the working class against capitalists.

Against the Europe of the Capital, which has no more to offer than misery and social tragedies for the workers and the people, we support the struggle for workers’ governments with the perspective of a United Socialist States of Europe.

For the Trotskyist Fraction – Fourth International