Against the authoritarianism and homophobia of the Russian government! 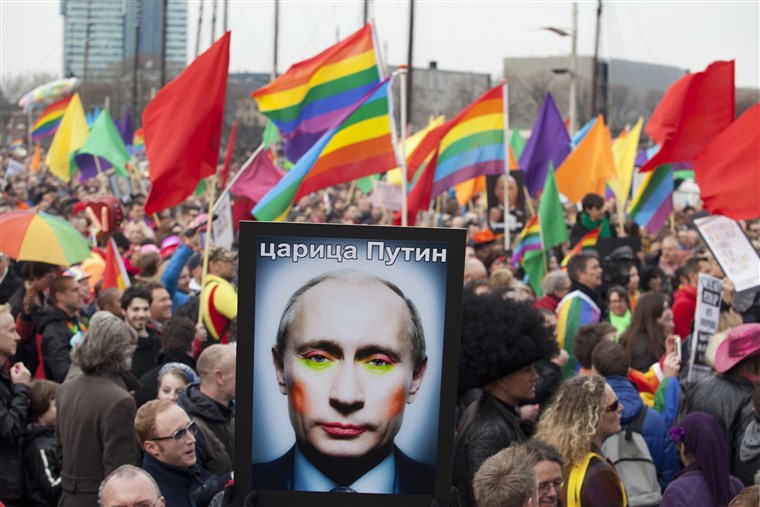 The authoritarianism and homophobia of the Russian government have increased in recent years, arousing numerous protests. Among those most publicized by the press, in the Olympics, the Swedish high jumper Emma Green painted her nails with the colors of the rainbow, in support of the demands of gays and lesbians in Russia. Even two Russian athletes, in the women’s 4×400 meter relay races, kissed each other on the podium, an action that at first looked like it was an act of protest against the anti-gay laws in Russia, but there are contradictory reports, since different media have come out to deny that it was about an act of protest. In any case, it is not surprising that the whole planet interpreted it in that way, because of the brutal homophobia of Vladimir Putin’s government.

The Russian government’s most recent repressive measure was voting on a law against “homosexual propaganda” in the Duma (the Russian parliament). It passed with 434 votes in favor, no votes against and one abstention. Yelena Mizulina, head of the parliamentary committee on the Family, Women and Children, and a Deputy from the Russian social-democratic party, made the case that the law “persecutes the formation of non-traditional sexual standards among minors.”

This repressive law prohibits gay acts in public places or in the communications media. Fining individuals 125 euros, 1000 euros if they are public officials, and up to more than 10,000 euros if they are institutions. The Russian government already repressed the protest actions on the same day as the vote and recently fined a gay cinema festival (“Side by Side”).

But, over and above the fines, this law, promoted by the government and approved by the entire Russian parliament, encourages intolerance and violence against the LGBT population. We already saw several cases of harassment and violence against homosexuals in Russia after its approval. The most chilling case was that of a young man tortured and murdered, a few days ago, by the neo-nazi group Occupy Pedofilyaj. Groups of the far right are getting organized with the approval of the government and the police, while repression against the social movements and the left, by Putin, who treats these [far right] groups permissively, is increasing.

Unfortunately, sexual oppression and discrimination are not an isolated phenomenon, nor do they exist solely in Russia: they are expressed in the persecutions and murders of activists and gay people in countries of Africa and the Middle East, in the thousands of demonstrators from the reactionary Catholic right wing that are mobilizing in France against marriage equality; in the gay-recovery clinics in different countries of Latin America, that have nothing to envy in the McCarthyite and discriminatory policies of the 1960’s, that were the kick for the Stonewall riot, and, closer to us, in the daily demonstrations of homophobia that are occurring in Spain, like the homophobic attacks of the Mossos d’Escuadra on a bar of the LGBT community in Barcelona, last June 28, nothing less than the day on which a party was being held, in commemoration of the Stonewall events.

From Clase contra Clase, we condemn the homophobic and authoritarian measures of the Russian government, as well as the actions against the LGBT community, by the fascist bands, that are opposed to gay men, lesbians and trans people. As we said a few weeks ago, “To end LGBT-phobia, and stop those who want us to make little progress in the rights that have been achieved, like marriage equality or the right to abortion, to get the end of Catholic custody over our lives, bodies and sexuality, it will be necessary to impose the effective separation of church and state, the end of the Concordat, the end of the subsidy for religious education, and to expropriate all the properties that the Catholic Church still keeps, a result of centuries of plundering the masses of the people.”

To end gay-lesbian-trans-phobia and all discrimination, we are fighting with the perspective of overthrowing this miserable capitalist system, of oppression and exploitation.

Against the authoritarian and homophobic Russian government!!

No to the anti-gays law!!

Against police and neo-nazi persecution of the LGBT population!!

For all the rights of the LGBT population!!