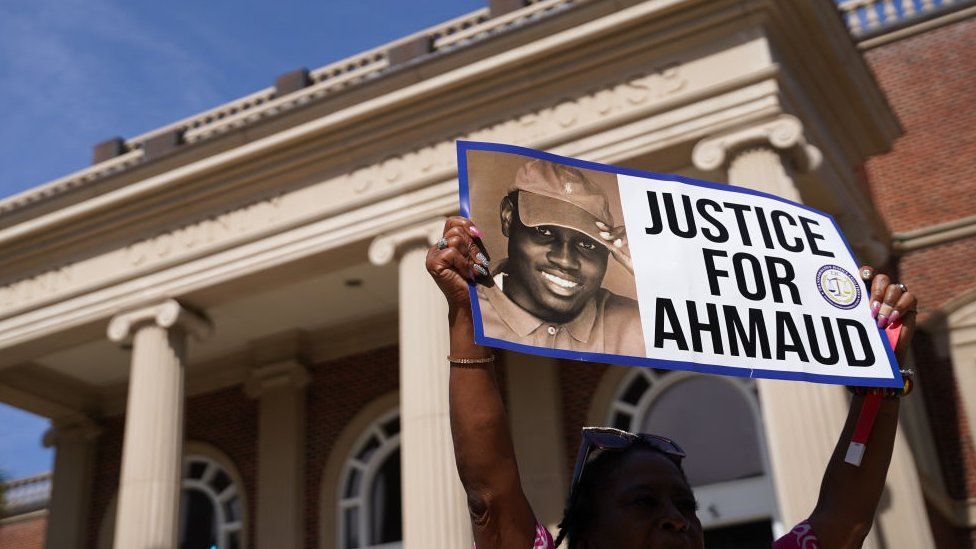 In her closing remarks during the trial of Ahmaud Arbery’s murderers, defense attorney Laura Hogue portrayed Arbery as a criminal,, comparing him to a runaway slave. She said, “Turning Ahmaud Arbery into a victim after the choices that he made does not reflect the reality of what brought Ahmaud Arbery to Satilla Shores in his khaki shorts with no socks to cover his long, dirty toenails.” Today, after two days of deliberations, the jury found father and son duo Travis McMichael and Gregory McMichael, as well as their neighbor William “Roddie” Bryan, guilty of the racist murder of Ahmaud Arbery.

But this is not justice being served in a just system. In a just world Ahmaud Arbery, George Floyd, Trayvon Martin, Breonna Taylor, and many others would still be alive. In a just system Ahmaud Arbery would not have been chased down the road in a pick up truck by white, racist vigilantes for simply being out for a jog and then mercilessly murdered while the murders filmed the lynching. Capitalist politicians will say as much, denouncing racist murders in one breath while with the next celebrating  the racist capitalist system that is responsible for these deaths in the first place. Just today, in her statement on the conviction of Arbery’s killers, Kamala Harris paid lip service to the tragedy of Arbery’s death and “continuing the fight for justice,” while also lauding the jury and the justice system as a whole for its verdict.

But for socialists, the phrase “Justice has been Served” in a racist capitalist society is reminiscent of the now famous Batman slapping Robin meme. The verdict in the trial of Arbery’s killers doesn’t show that the “justice” system works; in fact, the murderers were convicted despite the racism baked into the core of the U.S. state. The racist capitalist legal system that finally delivered a guilty verdict against the killers also struggled to charge them in the first place.

Arbery’s murder investigation and trial was fraught with racism from the start. It took 74 days for his killers to even be charged with his murder. The first prosecutor, District Attorney Jackie Johnson, recused herself because one of the killers, Gregory McMicheal, had worked for her. She appointed a second prosecutor, George Barnhill, who argued that there was not enough evidence to arrest Arbery’s killers due to Georgia’s citizen’s arrest and self defense laws. Barnhill also recused himself following pressure from Arbery’s family and public outcry. It was also revealed that Barnhill’s son had worked with the senior McMichael, a blatant conflict of interest. Later, District Attorney Jackie Johnson was indicted for charges of Violation of Oath of Public Officer and Obstruction of a Police Officer in relation to the investigation.

During the jury selection process, the defense counsel lamented that they needed more “Bubbas” and “Joe six packs” on the jury to influence the verdict, referring to white men without a four year college degree. The final jury had only one Black juror and the trial was allowed to proceed even though the judge acknowledged that there had been discrimination in the jury selection process. The defense team even tried, unsuccessfully, to prevent Reverends Jesse Jackson and Al Sharpton from being in the courtroom, saying that they didn’t want “more Black pastors coming in here.”

The legal system that convicted the McMichaels and Bryan of Arbery’s murder is the same one that just a few days ago acquitted Kyle Rittenhouse of all charges after he travelled from Illinois to Wisconsin to join the police in repressing protesters in the wake of the police shooting of Jacob Blake and protect private property, killing two protesters and injuring another. It is the same legal system that did not charge the cops who murdered Breonna Taylor in her own apartment, and that let George Zimmerman walk free after he killed Trayvon Martin.

It is the same legal system whose guardians — the police — are descendants of slave catchers and that thrives on incarcerating Black and Brown people disproportionately for a reserve of free and underpaid labor. It allows the ruling class to break strikes and maintain racial hierarchy in workplaces and beyond to maintain their profits.

The guilty verdict in Arbery’s murder was not a result of a just legal system, rather it was mass mobilizations that helped deliver the verdict. It was the anger of the working class and the oppressed that forced the governor to repeal Georgia’s citizen’s arrest laws. These citizen’s arrest laws are a relic of colonial times and later aided in the capture of runaway slaves. Decades later, the defense for Arbery’s killers used this same logic to justify Arbery’s murder, comparing him to one of these runaway slaves.

The legal system is racist to the core. Racism is not just a manifestation of interpersonal prejudice that would be cured if white people were simply nicer to us, as many liberals and academics would like us to believe. Racism is a necessary tool for the ruling class to maintain its rule, which is built on the genocide, rape, violent displacement, exploitation, and incarceration of the working class and oppressed.

From time to time, the ruling class, when afraid, concedes to our demands and allows a guilty verdict for racist killers. But this is not the result of any jury, judges, or liberal lawmakers that ultimately function to uphold racist laws. It is the sentiment of the masses and our mobilization that forces these instruments of capitalist domination to make concessions. We cannot afford to take guilty verdicts for racist killers for granted, just as we cannot depend on the capitalist Democrats, who will sell us out once they get elected, to save us. Similarly, we cannot rely on union and social movement bureaucrats who water down our demands to put a stop to racist murders and the racism that is ingrained in the system they represent.

Instead, our liberation is rooted in the unity of the working class and the oppressed for the purpose of overthrowing the racist capitalist system, rather than trying to fix it. A reformed capitalist system that depends on racism for its survival will still be racist. This system is not for us and never will be. We must use our collective strength and force the ruling class to submit to our demands.