Striking mine workers at Warrior Met Coal overwhelmingly voted down the tentative agreement. The strike continues! 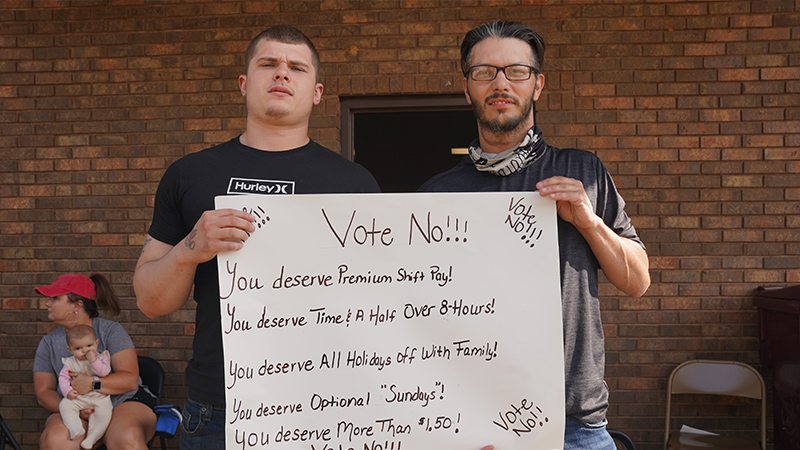 Striking mine workers at Warrior Met Coal overwhelmingly voted down the tentative agreement reached earlier this week between UMWA and the company. Workers will continue the strike until the contract addresses the central demands for better wages and conditions that workers have been demanding.

The results of the vote were overwhelming. A miner’s facebook group highlights that at one mine, the “no” votes were unanimous. In another, the vote was 256 No to 7 Yes. This is what a landslide looks like. The workers want to continue the strike until they get a better contract.

These workers have been on the picket lines for over a week and show no signs of stopping. Their struggle is strong, their conviction is stronger and the strike has the strength to be victorious.

The workers experience brutal conditions: mandatory 12-hour shifts that make workers strangers to their children, injured miners forced back on the job, “healthcare” that leaves miners thousands of dollars in debt, and wages that are much lower than similar jobs in the area. They make massive profits for the bosses ofof Warrior Met Coal, who get rich off of their labor in one of the most dangerous jobs in the country. The workers, organized by the United Mine Workers (UMWA), have been in a fierce contract negotiation battle with Warrior Met since late last month after the company presented them with a contract that made cuts to their wages, healthcare, pensions, and protections.

Before, the company wouldn’t even sit down to negotiate. Thanks to the strength of the strike, the bosses have been forced to the negotiating table. On April 6, the union presented the highlights of a new tentative agreement to the striking workers that they worked out with management; several workers have described it as “a slap in the face.” Many workers walked out of the presentation, refusing to waste any more time on the terrible deal.

The new tentative agreement presented by the union offers workers a minimal raise — around $1 per hour for each tier of employment and $0.50 after three years — that is nowhere close to regaining the wages stolen in the 2016 contract or keeping up with the rising cost of living in the area. A $1.50-dollar raise that is expected to last for the next five years (the length of the contract) is certainly nowhere near the $30,000 to $50,000 bonuses supervisors are taking home for record production or the $4 million that CEO Walter J. Scheller, III took home last year.

The new tentative agreement (TA) reached by the union representatives and management also makes very few changes to the workers’ healthcare plans or their paid time off. Beyond this, the tentative agreement also does not get rid of the “four strike” policy that makes it impossible for workers to take off time from work to deal with unexpected events like a car breakdown, a sick family member, or even a workplace injury or Covid-19. In fact, it merely extends the policy, granting workers “six strikes” before they are fired. Workers feel this is unfair, especially the ones who have been working in the mine for decades.

Today, the workers had the chance to vote on this tentative deal and it wasn’t even close. Every worker we spoke to explained all the reasons they planned to vote no. Miners and their families posted “VOTE NO” on their social media, encouraging each other to stand strong in the strike. Some workers held up this sign proudly:

In a statement, the UMWA correctly stated, “The membership has the final say in what their collective bargaining agreements look like…The decision was theirs to make.”

A miner who wished to remain anonymous said, “I could not be happier with my union brothers and sisters for everybody voting no on this agreement. I’m so proud we are standing up together. They done us wrong. The bosses aren’t running the mine, we are. It’s time we stand up and say we aren’t gonna take this.”

Victory to the Miners of Warrior Met Coal!