Students in Albania are taking to the streets against a major neoliberal reform affecting higher education. The reform is promoted by ‘socialist’ Prime Minister Edi Rama. 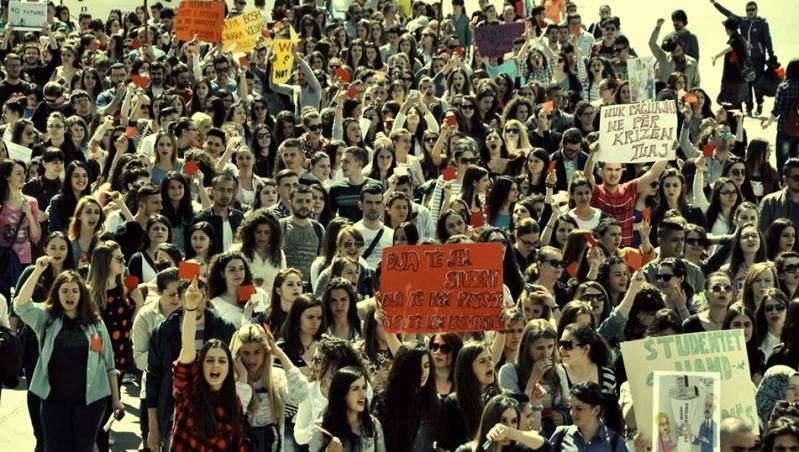 We interviewed Redi Muci, a member of the movement “Për Universitetin” and a lecturer at the Polytechnic College of Tirana.

1- What is going on in the universities in Albania currently? Why are students mobilizing?

The Socialist Party that holds office in Albania recently passed a law in parliament which will implement a neoliberal reform with dire consequences on the future of higher education. This reform entails funding private universities with public money, a hike in tuition fees, the introduction of a highly unsustainable student loan (given the possibilities for employment and repayment), and the bureaucratization of the university by forming a managerial elite comprising government officials and businessmen who will be responsible for administering the budgets. Students have been mobilising around the student movement “For the University” (Per Universitetin) in a series of mass protests, and one-day occupations, publicly denouncing this reform. A few days ago, student activists from PU threw eggs at Prime Minister Edi Rama, while he was exiting a meeting with a group of businessmen in one of the halls of the School of Social Sciences. This incident deteriorated into violence from the police and the prime minister’s bodyguards against the students. The incident has attracted a lot of media attention.

2- What has been the response of the government?

The government has mainly kept quiet and pretended that the protests were something not worth responding to. In the very few instances when the Minister of Education has commented on the events, she has used a great deal of cynicism, calling the students badly-informed at best. The Prime Minister refused to comment on the egg-throwing incident. Meanwhile, he chose the end of July, the time when students and professors do not inhabit the university, to quietly pass the reform in parliament.

3- Do the students have the support of other sectors of society?

The issues of the students tend to touch on wider aspects of society, such as the high rate of unemployment, the vast numbers of immigrants seeking economic asylum in Germany (Albania has the second highest number of applicants, after Syria), corruption that is choking the country and a general sense of an untouchable caste of politicians connected to organized crime. So they interpret the neoliberal reform in public education as unacceptable for the living conditions of average Albanians and as a means of cementing class differences within the university doors. Hence, this general rhetoric has brought hope to large sectors of society that something new and uncorrupted, not related to any political power, is emerging in Albania. The movement has had the support of civil society, intellectuals and large portions of the media.

4-Today there was a demonstration. How was it? What are the next steps?

The demonstration we held on Wednesday was the largest yet. It brought together around 800 to 1,000 protesters, which is unprecedented by Albanian standards. It was targeting the state violence, the reform, and the repressive police apparatus. We had the support of many citizens. The next steps will attempt to refute the implementation of the reform by protests, agitation, occupations, and boycotts. We are even thinking of undertaking a nation-wide referendum, although the logistical difficulties are considerable at the moment. However, our main objective is to create permanent structures of the PU movement in every university.