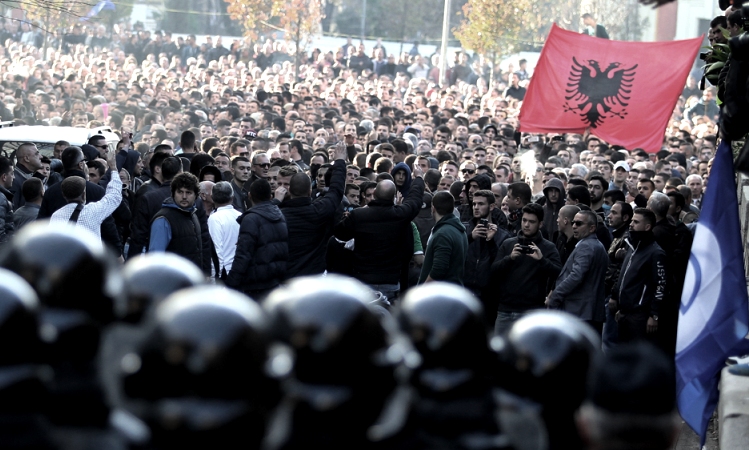 The interview was conducted by Philippe Alcoy for the French website Revolution Permanente . We have edited the text for stylistic and grammatical purposes.

Last week there was a big demonstration in Tirana. What were its main demands and what gave rise to it?

The protest was called by the right-wing opposition Democratic Party, who denounced the governing coalition of the Socialist Party and the Socialist Movement for Integration (LSI) as corrupt and as being connected to mafia groups. They called for the immediate resignation of the government and the formation of a government of technocrats to supervise the transition to new elections.

These demands, I believe, spring from growing discontent among Albanians, and last week’s protest was a way of expressing their anger at the utterly corrupt and dysfunctional governing institutions of Albania. There have been a number of failed reforms, such as the so-called ‘war on the informal economy’, and reforms of the energy and education sectors. These reforms were said by the government to serve the public interest and the rule of law, but in fact, because they were neoliberal reforms, they further entrenched class divisions and consolidated the position of the oligarchs close to the ruling coalition. Furthermore, the judicial system functions almost entirely through bribes and is an elite that protects private interests. The same is true of the media, which is controlled by oligarchs.

Why isn’t the Democratic Party an alternative for the popular classes?

The DP represents the old model of political party that was formed after the fall of the ‘communist’ dictatorship 25 years ago. Its members are politician-businessmen whose interests are entangled with those of the oligarchs and small mafia groups, and its militant base rank and file remains active and loyal by being promised positions in the public sector and in local and national government when the party is in power.

In a similar protest on January 21, 2011, called by the Socialist Party against a corruption scandal involving the leader of the LSI, then in coalition with the DP, four peaceful protesters were shot and killed by the National Guard. The shooting was authorised by the then Minister of Internal Affairs, Lulzim Basha, who is the current leader of the DP, the party which organised the protest last week.

So among popular classes today, the feeling of frustration with the current government is combined with disappointment due to the fact that the only political force able to mobilise large numbers of people at the moment is yet again the DP. This is the result of an almost complete lack of organised social groups that are not affiliated to the main political parties. Since they were founded, the trade unions have been operating on a fictitious agenda since their founding and the EU-funded NGOs serve more as a sticking plaster for the country’s deeper wounds.

Do you think that the current movement will develop? Are there other demonstrations planned for the near future?

I believe the protests will continue. As I mentioned above the discontent with the political elite and the current government is rocketing, with unemployment rising and a general sense that things will never take a positive turn. This has caused a wave of immigrants to head for Germany and other northern European countries seeking economic asylum.

On the other hand, the DP is looking to capture the momentum and make political gains out of the general feeling of frustration, even though they were widely discredited by the policies they carried out during the eight years that they held power, from 2005 to 2013. The DP has called another demonstration for December 17.

Students are fighting back against the neoliberal reforms of Edi Rama’s government. Did students’ organisations participate in last week’s demonstration?

The student organisation ‘For the University’ (PU) did not take part in last week’s demonstration because it was called by the DP. The PU, which is the only mass organisation in Albania that opposes the entire political caste, is fighting hard to fend off attempts by the opposition party to exploit the actions of the student movement for its own ends.

The students’ struggle is concentrated against the neoliberal policies in higher education, which are in line with the rest of the reforms implemented by the government. Recently the movement supported the initiative of students from the Faculty of Geology and Mining to boycott lessons. The boycott was to oppose the government’s decision to move the faculty from its current location in order to transform the building into the Palace of Justice, as part of the judicial reforms that the government is pushing. The government has not provided suitable new accommodation for the faculty.

The student movement PU has called for a mass protest on December 16, one day before the DP’s scheduled protest. We hope to draw large crowds to the demonstration, which will aim at building a broader movement around social issues.