Algerian Army Seeks an Exit to the Political Crisis

Algeria’s Army chief has tried to find an “institutional” way out of the crisis caused by mobilizations against the government: minimal changes to maintain the political regime. 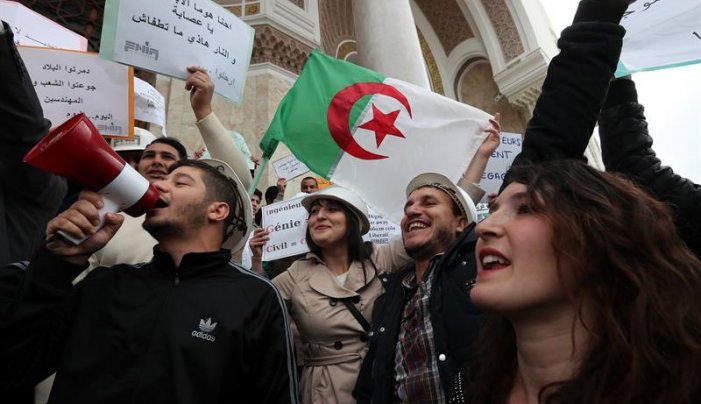 The government lost two major allies this weekend: the Army, a bastion of the National Liberation Front (NLF) and the Democratic National Rally (Rassemblement National pour la Démocratie, or RND), which was the NLF’s main  ally while providing democratic cover for the regime during the civil war, under the command of Ahmed Ouyahia. If this crisis continues to develop, a section of Algeria’s ruling class will try to find a “transitional” way out of an explosive situation.

On Tuesday, the Army chief and vice minister of Defense, General Ahmed Gaid Salah, demanded in a televised speech for the formal deposition of Abdelaziz Bouteflika as both president and minister of defense. The demand arrived amid massive antigovernment demonstrations that since February 22 have taken over Algeria’s streets. The mobilizations began as a response to Bouteflika’s announcement that he would be running for a fifth consecutive presidential term and grew immensely, mobilizing 15 million people against the president, and questioning the Algerian regime as a whole. In the face of this development, the government’s top layers and its allies scramble to give a response.

Gaid Salah, posing as a defender of democracy, is the regime’s last pillar. Under article 102 of the Algerian constitution, the president could be replaced if, “due to a serious and lasting illness,” he has become “completely unable to perform his duties.” This is the article that Salah invoked in his demand.

“It has become necessary, even imperative, to adopt a solution to solve this crisis, that is an echo of the legitimate claims of the Algerian people,” said Gaid Salah.

The Constitution would allow the formal “disqualification” of the president by the Congress, after a two-thirds majority vote, placing Abdelkader Bensalah, as president of the Senate and head of state, with the task of calling new elections.

Gaid Salah, who had been a major ally of Bouteflika since the latter named him head of the Army in 2004, said he intended to “listen” and end this period of political turmoil and public demonstrations.

Nessim Ben Gharbia, an Algerian jurist, explained to the Spanish newspaper El País that “Bouteflika’s term ends April 28. Beyond that date, there would be a constitutional void, and therefore institutional chaos. The Army had a choice between using the article 107 of the Constitution, of emergency status, or article 102. They ended up leaning toward an institutional option, and a legal transition.”

The main problem the regime could face is an institutional blockage that sets it back and forces it to openly expose its own contradictions, making it impossible to advance to the “transition” scenario the dominant classes are beginning to back.

The Army is stepping into the role of the regime’s “guarantor,” a role that armies tend to play in scenarios of deep questioning and crisis, as in the cases of Turkey or, even more profoundly, Egypt. Algeria’s Armed Forces, like the rest of the NLF-led political regime, have been exhibiting political decomposition ever since the war of independence against France.

Because the regime is decomposing, the disqualification of Bouteflika has been called for even by the regime’s main ally, the RND—the center-right party born in the 1990s to play the role of the state’s democratic layer, during the conflicts with Islamic groups during the “black decade.” Ahmed Ouyahia, who had been prime minister three times and is a pillar of the regime’s institutional power, was fired by the president on March 11, in a move that was broadly recognized as an attempt to appease the protests.

It did not take Ouyahia long to become a defender of a democratic transition to avoid any further development of the political crisis, calling to replace “Bouteflika’s regime, which is a cancer that rots the body of the state.” His plan is to preserve the regime with a change of face, trying to portray Bouteflika’s rule as if it were the entirety of Algeria’s problems.

The General Union of Algerian Workers (UGTA), the main union confederation, which had been putting a brake on any expansion of the crisis, is totally subordinated to the NLF, yet it communicated its support of Gaid Salah’s proposal to apply the Article 102 of the Constitution. The pressure from self-organized antibureaucratic elements dissuaded the UGTA from trying to stop the massive demonstrations.

It’s clear that neither the Army nor a political party that belonged to Bouteflika’s regime can offer an exit to the political crisis favorable to women, youth, and the working class.

Removing Bouteflika is a first step, but both Gaid Salah and Ouyahia are two faces of a frightened regime that is looking to keep its hold of the state—following an institutional path and granting a few minor concessions.