Algerian Students: “We Are Not Going to Stop”

This is an interview with Algerian student activist Yani Aïdali, originally published in our French sister publication Révolution Permanente. 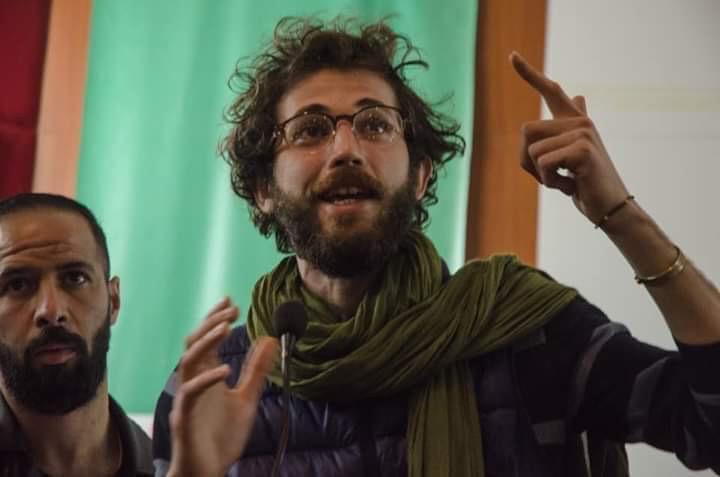 Yani Aïdali speaking at a public meeting in Algiers.

Yani Aïdali, who studies archeology at the University of Algier 2, is both a militant of the Socialist Workers Party in Algeria (part of the same international organization as the French New Anticapitalist Party, or NPA) and one of the leaders of the massive movement in Algiers. He says the youth are not ready to go back home. They have taken down Prime Minister Abdelaziz Bouteflika, and they want to keep going.

What is the state of the Algerian mobilizations? How is the student movement influencing and intervening in them?

The mobilizations began two months ago, with two major demonstrations on March 16 and 22. They are still ongoing, and even after Bouteflika’s fall and the repression we suffered, they are as intense as ever. The biggest demonstrations are on Fridays, but students have their own on Tuesdays. In some colleges there are strikes that last indefinitely, while in others they are renewed every week or every couple of days, depending on their respective assemblies and their schedules. Argel 2 and El-Harrach are the most active universities. Additionally, every high school has its own autonomous committee, and they organize together, forming a group of 800 high school students. We have still been unable to coordinate the student movements in Algiers, but we are working toward that.

What does this movement mean for the youth in a country with high unemployment?

We have felt powerless for years when it comes to the labor market. We face a very high unemployment rate among young people. Very few college majors offer true professional opportunities. For many of us the only way out is to migrate somewhere, usually to France.

What are the students’ demands?

From the beginning the student movement was part of the bigger popular movement. So we just adapted the general political claims to our reality. We started fighting Bouteflika’s possible fifth term, and once he quit, we pushed forward, demanding the whole regime’s resignation. Now we do not recognize the army’s government, and we demand the resignation of the chief of staff.

As for the demands specific to the student movement, we are fighting for a free, open and high-quality public university, against the government’s attempts at privatization. We also want the children of workers and peasants, and the popular classes, to be able to go to school. It is very important to fight for quality college education, since the government’s lack of interest in public university, and the LMD (bachelor’s master’s doctorate) system it imposed, have caused it to deteriorate. Students are paying the price for it.

The student movement in general, except in some provinces, had retreated quite a lot recently, mostly because it lacked structure and self-organization. We also had many “satellite organizations,”  which answered politically to the government coalition and had ties with the administration. So we relaunched a call for students to self-organize in general assemblies, which is a lost tradition among the student bodies. This first step of organization took up a lot of our time, leaving barely any time to actually debate politics or our views and ideas for the movement. Now that things are more stable and balanced within the assemblies, we are beginning to see some real debate.

Many students defend the idea of voting in a constituent assembly, but our ideas and slogans haven’t been very influential. We are not visible enough to successfully campaign for them. So the liberal opposition, pushing for a quick and peaceful transition, has managed to impose itself. That would mean a transition led by those above, excluding the workers and the less favored sections of the population. We continue to insist on our alternative to their project: a constituent assembly.

In Tunisia the constituent assembly was a dead end for mobilizations and a way out for the ruling class. How do you make sure this does not happen in Algeria?

A main weakness of the movement is its ideological content, or its lack thereof. Demands are still vague, but radical. Everybody wants the end of the regime. They all know the things they do not want. But it is not that easy to decide what we do want.

The liberal opposition is going for a short-term, peaceful transition. Nevertheless, I think the solution will come in the long term, after a deep process of rebuilding self-organization and political awareness. Most people agree with our defense of self-organization, even liberals and the same Islamists who then defend all kinds of reactionary things. What sets us apart is our ideological and political content.

The demand for a constituent assembly is useful to show the way forward for the movement. It is supposed to unite all of us who support the assembly, even though our points of view on the general situation and objectives may vary. To date, only our party, the Socialist Workers Party (PST), has proposed a sovereign constituent assembly to be elected after a process of self-organization.

On April 17, we saw a massive mobilization of the unions’ rank and file in front of the Algerian Workers’ General Union (UGTA), defying the bureaucracy of Abdelmadjid Sidi Said, the UGTA’s president. What’s the link between the student and the workers’ movement?

There have been protests aiming to remove Sidi Said from his position in the UGTA. Since some unionists publicized this demonstration, there was more support from the workers. Most of these unionists are bureaucrats as well and just want Said’s position, but it was still important to be a part of it, to use the opportunity to talk with the workers and push for a democratic and combative UGTA.

Some sections of the student movement have been trying to build a bridge with the workers. That is why one of our motions in the last General Assembly in Algiers was to open the university to all other struggling groups. Our plan is to invite the most active and militant workers in the UGTA to discuss the situation and the challenges we face.

The new government used a whole arsenal for repression a week ago: tear gas, sound cannons, tanks. Many protesters, especially from the PST, were arrested. What can you tell us about it?

Army Chief Ahmed Gaid Salah called for the application of article 102 of the Constitution, which says that if a serious and lasting illness prevents the president from performing his duties, he is to be deposed. Bouteflika resigned, and the president of the Constitutional Council, Abdelkader Bensalah, took over for a 90-day period. We say there was a “soft coup,” since Salah had to intervene to reinstitute the regime and the Constitution, reestablishing the same old laws and officials. Repression began right after he appeared onstage. It was as if after two months of peaceful demonstrations, we were told, “Playtime is over. We have serious business to do, so you cannot demonstrate anymore in Algiers.”

Repression began in the public mail office. Then, large gatherings were banned at any other meaningful or symbolic places. We think that the authorities are targeting the most active militants. We are not scared. That is why we organize actions and demonstrations every day at 5 pm, even if the repressive forces try to intimidate us or our comrades. We believe that if we lose our freedom of expression or of assembly, we will be unable to keep participating politically. The state even has the press on its side. It has devices of propaganda. We just have our freedom to gather and organize. We must fight to preserve these hard-earned rights, even as it gets harder.

The government thought that repression would intimidate the population, but it had the opposite effect. Now the masses are willing to go out and fight every day. One of our slogans is “We are not going to stop, we will march every day!” It used to be Tuesdays and Fridays, but now it is every day.

Various sections of the bourgeoisie are trying to position themselves favorably in the movement. Is the army overwhelmed by this? How do protesters see these attempts to recover the movement?

Liberal opposition is trying to find a way out of this turmoil, and to do that, their politicians are trying to represent the masses. Some of them are respected by many people. But most people reject the regime’s representatives. Two of its main public faces, Karim Tabbou and Mustapha Bouchachi, were linked to the Socialist Forces Front. They are presented by the media as “wise” and “honest” people, prepared to lead a quiet transition. But choosing between this liberal opposition and the current government is like choosing which sauce the workers will be eaten with. Who decided these people are wise and honest? None of this is democratic. That is why we call for a democratically-elected constituent assembly, based on self-organization. We do not want these people thrown at us from above, and the movement rejects them wholeheartedly.

French President Emmanuel Macron saluted the new government. The United States emphasized that the decision was up to the Algerian people. We see how now the superpowers are having second thoughts about Bouteflika, so they are being ambiguous in their positions. How is imperialism viewed after so many years of Bouteflika’s complicity?

Protesters have not spoken much about it. There is not much political response. Since February 22 there have been many denunciations of foreign interference, mainly against Macron. This has a lot to do with Algeria’s role as a provider of natural gas, oil and raw materials for France, and other markets of easy access. There is still an anti-imperialist conscience, related to the role of the EU and the discussion about Algeria joining the WTO. These things are not well known or understood, but they are widely rejected. The Libyan and Syrian examples helped raise certain awareness. We do not want the same situation in Algeria. Foreign interference means disorder, chaos and civil war to us.

What does the movement need to finally get rid of what protesters are calling the “murderous power”?

I think the political momentum, and the balance of forces, still favor the government. Even with such a strong popular movement, we are still in a sort of dialogue with the government. They make decisions and we answer in the streets, but we are far from being in a revolutionary scenario with dual power.

What could turn the tables is the masses’ potential for self-organization. We are still far from this because the government slowly destroyed almost every single democratic organ we could use to organize, even student and worker unions. We face the challenge of rebuilding all that, but by doing so we can change the balance of forces. Right now, the working class is not the predominant force in the current scenario. There is no popular call for a general strike.

In the south of the country—which is home to a key element of Algeria’s economy, the oil and gas industries—no strike lasted longer than five days. There is barely any process of self-organization. The weakness that the working class currently shows could affect the movement’s future and development.